Pentagram partner Yuri Suzuki is talking to Design Week about how the melody in generic telephone hold music could be trained to constantly evolve by an algorithm so that it never repeats itself and therefore limits the sense of time passing slowly for anyone waiting on a phone line.

This is one of the research and development projects that he is working on for Pentagram, having been made partner at the London studio in 2018. While the consultancy has a history of product designer partners including co-founder Kenneth Grange and current partner Daniel Weil, the majority of Pentagram’s partners are graphic designers.

What Suzuki does is quite hard to pin down, but essentially he is a sound designer who works with electronics and creates large-scale installations, interactive works, products and musical instruments.

We caught up with him ahead of his talk at Design Indaba in Cape Town where he’ll be presenting at the end of the month.

Of the hold music project, he says: “When people are waiting on the phone they find that the music can get annoying so I’m creating an Artificial Intelligence (AI)-based algorithm melody progression with no repetition.”

Suzuki talks in excited soundbites and his head seems to be fizzing with ideas. He works within “space and sound design” in his own words and describes his appointment as “unusual for Pentagram”.

He shut down his own eponymous studio in East London when he took the new job and now works from a space within Pentagram’s West London studio, although describes himself as “quite nomadic”.

Career highlights include the wowing Z-Machines, created in 2013 for advertising agency Hakuhodo Zima in an effort to show that machines are able to play emotionally engaging music. The result is heart warming, breath taking and thoroughly entertaining, so it works.

“A 78 finger guitarist, or a drummer with 22 arms – although already partially explored in this project – suggests there is huge potential for Z-Machines,” according to Suzuki.

Then there’s the slightly more restrained Synth Play. This highly interactive project was created for Chinese tech company Raven and saw Suzuki turn large inflatable shapes into an interface for people to interact with. Each shape controlled a different element of sound while also manipulating light and smell within a controlled gallery space. 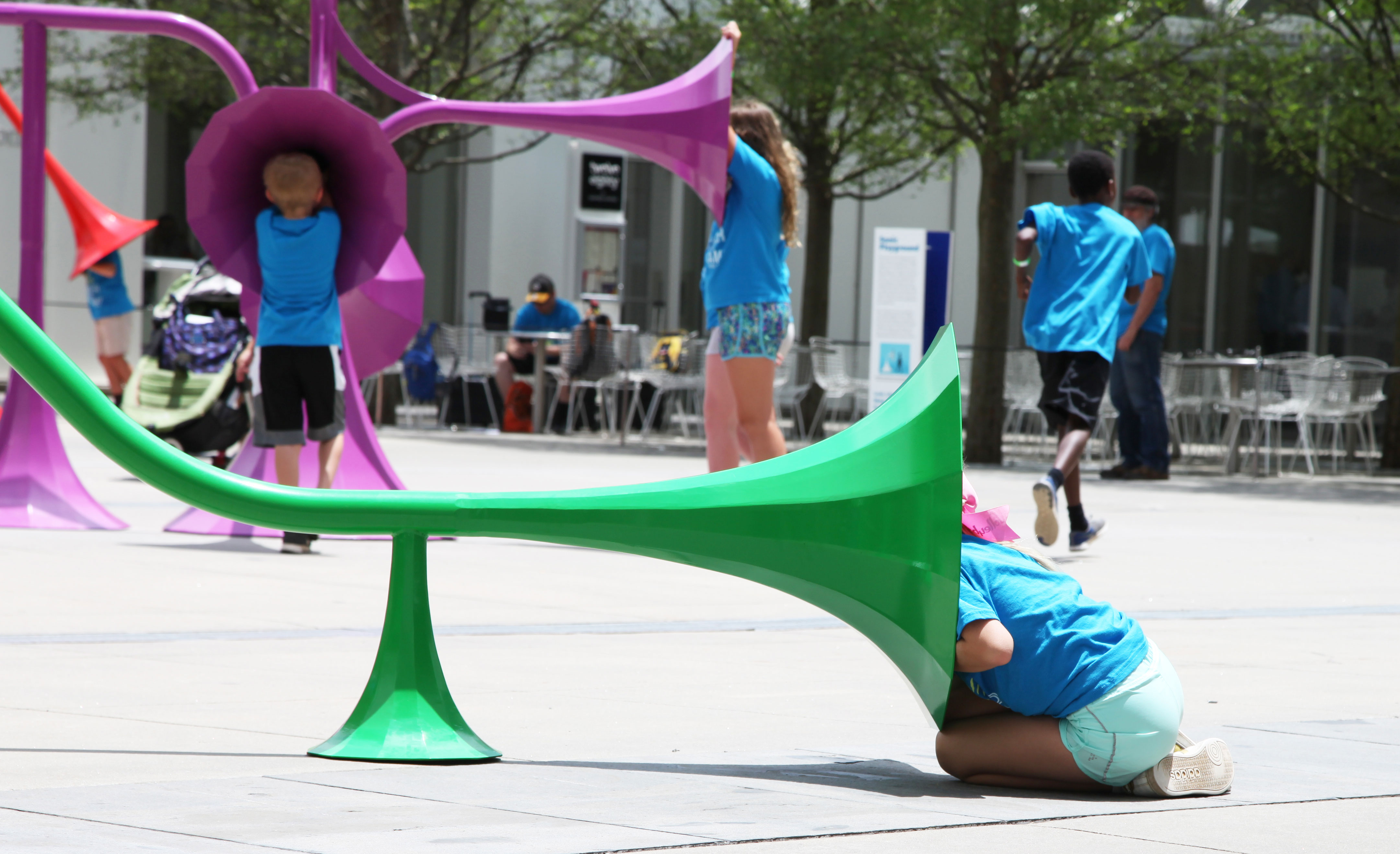 Some of his work is beautifully simple. Looking at the above image you can see that Sonic Playground created for the High Museum of Art in Atlanta, USA, barely needs explanation. Modular funnels and tubes have been constructed to encourage children to communicate vocally through play.

At the moment he’s working on a number of projects which he hopes he will be able to unveil at Design Indaba. Intriguingly, one of these is a set of musical instruments which was designed in the 1970s and never completed. Suzuki is finishing them off and bringing them to bear although he can’t reveal what they are.

He is a big believer in sound design being part of integrated design solutions and it is possible that in the future we might see Suzuki’s talents being put to use on a Pentagram branding project. Although he doesn’t say this explicitly he does talk about the power of sonic branding and sound signatures.

“Sound in branding leaves a strong impression and really sticks to your brain – it’s stronger than visuals even,” he says.

He’s also a big believer in the integration of sound design within products. A good example of this is car design, an area where sound design has historically meant things like the sound car doors make when they shut, or the alarm noise made when lights are left on.

However, Suzuki is struck by the possibility of sounds that can be synthesized within electric or self-driving cars, which in some cases can even be the sound of the car engine. He is “consulting with a car company” but won’t say anymore and is also interested in the further integration of voice activated connected home products such as Amazon’s Alexa.

Sonic product and sonic branding signatures are obvious outlets for Suzuki’s talents within Pentagram but we will have to wait and see what his design trajectory is. After all, he is highly experimental.

His main area of interest, although there is not a project tackling it per se, is how music and sound can affect human behaviour. “There’s nothing really out there on the psychology of sound in any detail so I’d like to look at that for research and education purposes.”