In our age of “always switched on” living, we have become prisoners of time — we just don’t stop. Our live-to-work attitude lends itself to the ever-increasing risk of mental burnout.

Take the creative industries as a microcosm of this culture, and the risks are tripled, according to recent research from Ulster University, which has found that anxiety and depression is “three times more likely” in the sector.

Depression and anxiety are prolific in creative industries

This is particularly a problem in the freelance community — a recent survey of self-employed illustrators found that four fifths of those surveyed struggled with anxiety and self-confidence issues.

Mental health issues have been found to be prevalent for those in creative jobs for many reasons. This includes unstable and irregular working hours, lack of job security, poor or irregular pay and the feelings of judgement and lack of self-worth that come with people constantly judging your work. There is also a general feeling that society undervalues the creative industries, as shown by Ulster University’s research.

A paper published by music charity Help Musicians UK in 2016 agrees with these findings. The research, carried out by the University of Westminster alongside Music Tank, found that a staggering 70% of the 2,200 musicians surveyed claimed to have suffered from panic attacks, with 65% having gone through depression.

As all this shows, it’s not one sector of the creative industries that suffers from increased risk of mental health issues. From designers and illustrators to musicians and writers, they all seem to share an enhanced likelihood of experiencing mental unease.

The stereotype of people working in creativity is that they’re emotionally-charged — they are seen as intuitive, imaginative and thought to feel and experience emotion deeply, sometimes to their detriment. But how much of this is governed by external, environmental factors, and how much are we implicitly programmed to experience?

Creativity itself has been linked to certain mental struggles, both circumstantially and biologically. A 2008 research paper published by Harvard University looked at the biological underpinnings of depression, and how its physiological roots may relate to creativity. The research showed that participants with higher levels of creativity tended to be more emotionally open, and had a higher chance of experiencing intense negative emotion. This was measured by levels of the adrenal steroid DHEAS, a compound previously linked to depression.

Then there are also the stereotypes surrounding “madness” and “genius”. Stemming back to the times of ancient Greek philosophers such as Aristotle and Plato, an inextricable link has been created between having an exceptional and unique mind, and having mental health issues.

Plato once said, “Creativity is a divine madness… a gift from the gods”, while Aristotle is known to have said “No great mind has ever existed without a touch of madness”. But labelling artists as “beautifully mad” can be dangerous as it glorifies this concept and promotes a romanticised idea of artistry and poor mental health.

However, hope is not lost. One conclusion drawn from the Help Musicians UK report was that although navigating a creative career can result in psychological and emotional distress, the act of creating itself, and achieving a state of flow, both contribute to a healthy mind. One of the most accessible and universal creative outlets is music.

Dr. Valorie Salimpoor, a researcher based in Toronto, Canada, has dedicated her career to investigating how music makes us feel. One paper, published in 2011, revealed that the chemical dopamine is released in the brain during intense moments of pleasurable music listening. Coined “the happy hormone”, dopamine is also known to be released during sex. When there’s an increase in dopamine production in our brains, we want more. In the same way that “love is a drug”, music is medicine, and a highly addictive one at that.

Other research by University College London has recently revealed that drumming can be used as part of a treatment plan for depression and anxiety. The work looked at the benefits of six and 10-week-long community drumming sessions in a group of individuals living with mental health issues. The intervention resulted in decreased levels of depression and anxiety, and increased levels of resilience in participants. The positive effects were maintained at a three-month post-study follow up.

How can music help?

So, music really is medicine, and we need to use it more consciously. There are simple ways to use music in order to keep on top of our mental health.

Our bodies are programmed to immediately enter ‘fight or flight’ mode at the beginning of the day, and I think we can all agree how much the sound of our alarm each morning can be a jarring, unwelcome start. While we need a certain amount of adrenaline to kick-start our system, listening to music that makes you feel happy and relaxed can bring a more positive start to the day, instead of letting your alarm dictate your morning mood.

Don’t be afraid to listen to sad music if you’re feeling gloomy. Research has shown that listening to sad music can actually induce positive emotions, as it creates the feeling of a shared sentiment, similar to the presence of an empathic friend or loved-one. The research which was carried out by Chan Jean Lee in 2013, showed that we prefer to experience mood-congruency in aesthetic experience, specifically when it comes to music.

If you’re feeling distracted by your thoughts or finding it difficult to concentrate at work or anywhere else, listening to percussive and repetitive music can aid concentration, according to research. Our minds synchronise to the repetitive beat and this causes our level of concentration to increase. Non-lyrical, minimal, percussive music is best to help you focus.

It’s fair to say that we live in a world where daily stresses are all-too-common. Instead of spending money booking a massage, why not tune into some soft music with a slow tempo? Optimum beats-per-minute for relaxation is 60 BPM. When listening to slow music, our heartbeat synchronises to the tempo of what we hear, resulting in a slower heart rate, lower blood pressure, and deeper breathing patterns.

What we can gain from all this is that while being creative can play a role in mental health issues, it can also be an antidote to these issues when applied in a thoughtful way. While life as a creative can sometimes lend itself to difficult emotional journeys, our creative expression is also the glue that binds us. If we can learn from each other and be mindful of the silent suffering that may be taking place among our peers, while continuing to be proactive with our creativity, then we really are doing our best. 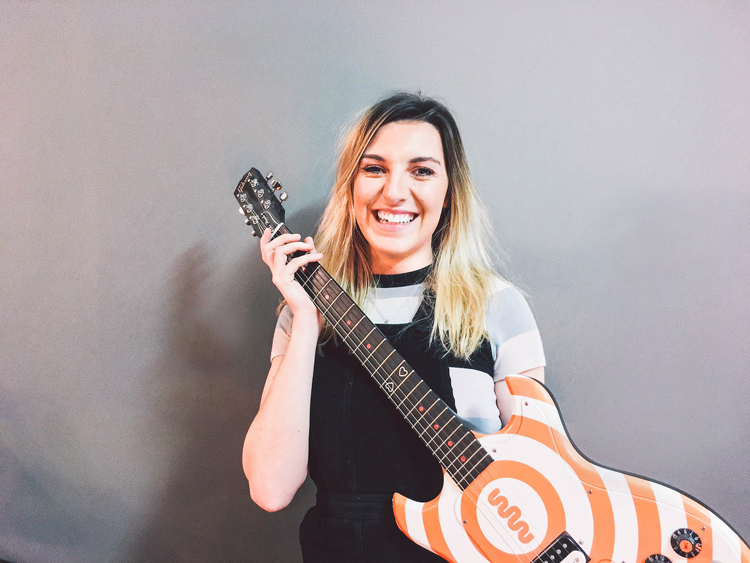 Aifric Lennon is a music and mind researcher at MassiveMusic, a global music production and sonic branding studio. In her work, Lennon looks at the social and psychological impact of music, particularly how it can increase wellbeing and trigger memories. She also works as a sonic branding project manager, giving brands sound-based identities.