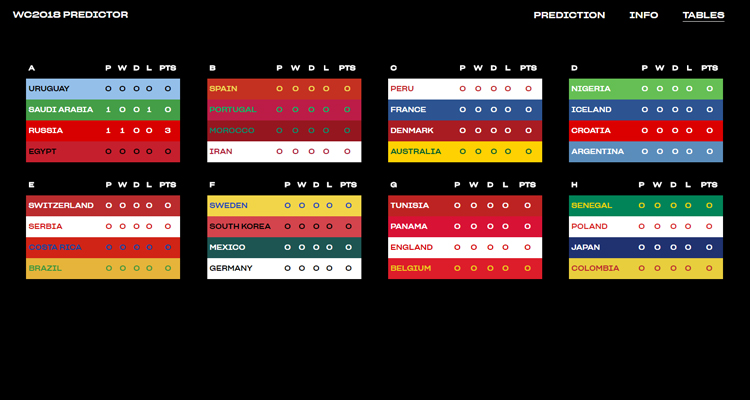 Warning: This article contains predictions about the results of the World Cup. While just predictions, if you would rather not know, then look away now.

Yearly football publication Season Annual co-founders Charlie Sims and Sam T Smith worked on the design and data for the predictor, while the website was designed and coded by Barney Jeffries at Bright White Space.

The WC2018 predictor has been created using an algorithm based on data which combines a team’s World Cup history along with its competitive form coming into the tournament.

It takes eight fields of data into consideration: these include win percentage, and a team’s average goal difference per game from every game at the last five World Cups. This range was chosen as it equates to 20 years, around the maximum time any one player would last in their squad. The predictor also takes into account how each country qualified for the 2018 tournament.

For the 2014 World Cup, Smith and Sims created a large poster predictor. The poster worked a charm, successfully predicting every match but one, and accurately forecasting a Germany triumph, “as well as predicting every team who progressed from their group and all the knockout stages bar one result”, says Smith. 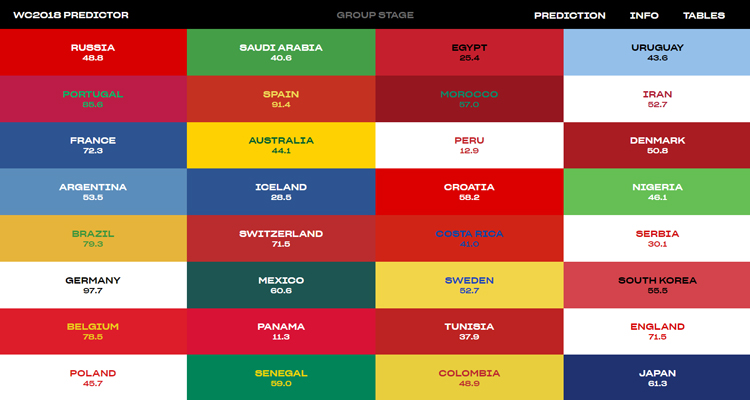 Without giving away the predictions as to who could make it to the quarter, semi and final stages, we can safely say the lowest scoring country is Panama with 11.3, thanks to its only qualifying in the final minutes of its final qualifier. It’s one of four countries in this year’s event to be playing in the World Cup for the first time.

The site uses a grid system presenting each country in the typeface Sharp Grotesk, taking their flags as cues for the colour palettes. As the tournament progresses, countries that are knocked out will be removed and the site design will become less crowded.

The team behind the site has placed bets according to the predictions, and will give any winnings to a mental health charity.

The website also acts as a resource for World Cup watchers, providing squad and schedule information.