The Times Literary Supplement has relaunched itself, adopting a new name and layout across its print, online and app platforms.

The weekly magazine has now adopted its widely-used acronym “the TLS” as its primary namesake, with marketing director Craig Niven saying this has been done to “dispel misassociations” about the publication.

“We are not a subsidiary of The Times, and haven’t been for over 100 years,” he says. “We do not write solely on literature and we are not a supplement of anything.”

It is hoped the new title will help position the publication “at the forefront of arts, culture and ideas” rather than just literature, while also appealing to a “newer, younger and more culturally diverse audience”. 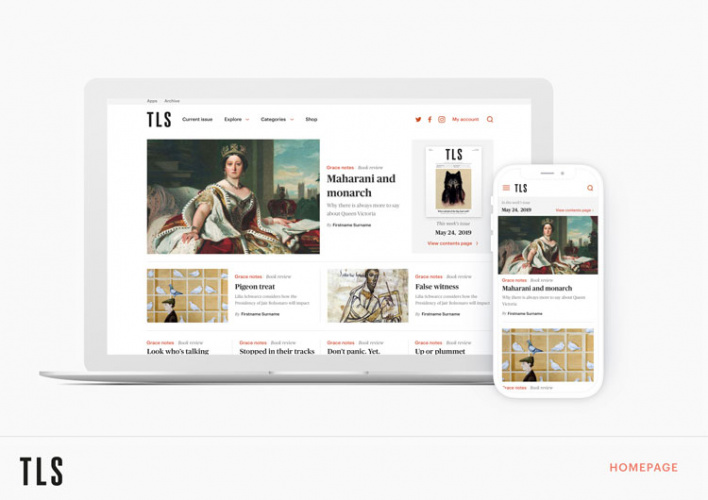 The move was prompted by customer research undertaken by the inhouse team, which suggested the existing brand was lacking in a concrete identity.

“We found out that actually there wasn’t any parity between what the public saw us as and how we viewed ourselves,” says Jake Cox, brand and design lead on the project.

Niven echoes this, saying: “When we finally looked to get away from our identity being related to The Times, we realised the TLS wasn’t very clear about what it stood for.”

The project therefore became an exercise not only in redesign, but also in establishing brand principles that would be easily identifiable by readers.

The new identity, which took designers just more than a year to create, centres a soft orange colour palette that aims to give a “modern and approachable” feel. This colour is employed in accents and background tints but is accompanied by a “liberal” use of white space, both in print and digitally, to make content easier to read.

The TLS has also adopted new typefaces in support of the new identity. The Publico typeset family has been chosen as a “modern twist” on traditional publishing serifs, while Graphik has been selected for its versatile “vanilla characteristics” which supposedly lend it well to different contexts.

Cox points to the design choices made during the project as working to “match the personality [the team] had defined”. He adds: “We needed to make sure it came across as forward thinking, without ever sacrificing elegance.

“We didn’t want anything too flamboyant, but something that sat comfortably and commanded the page.”

With no real brand identity to bring forward into its new iteration, the team saw project as chance to leave much of the old design behind and start fresh.

“The biggest challenge was really a mindset change internally – we didn’t have a lot of brand assets that we needed to hold onto – we had to realise we could change almost everything,” says Niven.

But while some effort has been made to put distance between the magazine’s past, there are some nods to its heritage. Most notably, the Times Literary Supplement name will be reprised in “certain circumstances that warrant it”.

Additionally, the TLS’s new website, which will be rolled out over the next two weeks, will allow subscribers to trawl through 118 years’ worth of the TLS’s archive.

It’s hoped the merger of the fresh design and will allow the publication to establish itself as an entity in its own right. Niven says: “The challenge the TLS has always had is that it has usually been seen as the little cousin of The Times.

“You could argue for a long time the TLS used the confidence of The Times’ brand in its own products. Now we’re getting away from that association, this stronger design is exactly what we need to carry it off.”