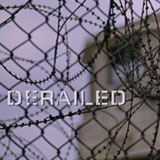 Crouching on a flatbed carriage on the Chicago CTA in the freezing November air, I watched the rails of the nearby track pass by.

The motion blends the sleepers into a continuous blur, while only the rails remain. Their silver heads ripple through switches, disappear behind platforms and return as impossibly perfect straight lines.

We were shooting plates for Derailed, a Miramax film set in Chicago, but mostly filmed in and around London. The plates would turn the UK into the US.

I always liked travelling by train on long distances. The world outside the carriage freezes while you’re moving. You have all the time in the world, as long as you don’t stop.

Later I was asked to design the film’s title sequence and for inspiration I went back to the rails.