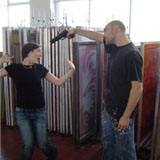 A Timorous Beasties-designed wallpaper is to be pulled from use in East London’s £26m flagship cultural venue Rich Mix, following an alleged controversy over its imagery.

An article in London’s Evening Standard newspaper last week claimed that the London Toile design depicts images of ‘a black gangster pointing a gun at a white woman’s head’, and claimed that its use outside a cinema in the multicultural arts venue had ’caused outrage among community leaders’.

Rich Mix chief executive Keith Khan has confirmed to Design Week that he has decided to replace the wallpaper with another commission, following the report.

However, according to Alistair McAuley, co-founder of Glasgow studio Timorous Beasties, the design actually shows a white man holding up a white woman in an ‘almost comic scene’, where the girl is exaggeratedly throwing her arms back in mock-horror. The man appears black because he is cast in shade, adds McAuley.

The first phase of Rich Mix opened last week, featuring the combined efforts of a multidisciplinary group of designers and artists. After a gestation period of about ten years, the 5760m2 centre is opening between now and October, and additional investment for further design commissions is being sought.

Housed in an old garment factory in London’s Bethnal Green, the building has been given an overhaul by architect Penoyre & Prasad, with design contributions including a wayfinding and signage scheme by All of Us, which is still in development.

According to All of Us art director Simon Sankarayya, the consultancy is testing its signage system and will garner feedback from visitors, ahead of plans to install an interactive version that could be linked to the centre’s event scheduling.

Rich Mix sits geographically amid the wealth of the City of London financial district and Tower Hamlets, one of the country’s poorest boroughs. With financial backers including the London Development Agency, European Regional Development Fund, Art Council England and the Millennium Commission, the project is intended to bring a world class cross-cultural arts centre to the region. It will offer events and facilities for creative output across the arts, technology, education, film and music.

‘We invited lots of designers and artists to take a look at the space and decide what they could do with it,’ says Khan. ‘It is a deliberate mix [of people], which goes against creating a mono-design environment.’ Khan is raising money to develop additional design commissions, including one proposal from Ron Arad and Philippe Starck collaborator Moritz Waldemeyer to introduce ‘electronic insects’ that guide cinema-goers to their seats, using information embedded in their tickets.