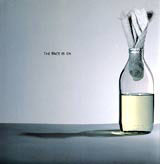 What are you expected to think when an unbranded box arrives through the post containing an empty milk bottle, a rag and a box of matches? Underground terrorists inciting violence with a bomb kit? No, something much more scary – a mail shot from a design consultancy. On trying to guess which group could be so provocative, we naturally came up with names like Bang Creative and Fuel. But Drawing Board in Manchester has owned up, claiming the mailer was part of its rebranding exercise as Race. All very inflammatory, particularly for the Metropolitan Police, who received a few calls from law-abiding recipients. They would have been even more worried if they had known the terrifying truth.