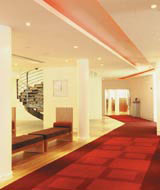 Reports out this week call on designers working in the hotel sector to reconsider interiors trends, as they sound a cautious note on the future of luxury, design-led hotels.

As hotel king Ian Schrager struggles to save his debt laden company, leading to press obituaries of the ‘design hotel’, Nota Bene, the well-heeled travel guide, has proclaimed ‘design hotels’ a ‘clichÃ©’.

And Harden’s first hotel guide, published tomorrow, suggests small, family-run hotels, particularly those out of London, are challenging ‘large’ names such as Hilton and Meridien on quality.

‘The big names of the hotel business seem to be trading on reputations that greatly exceed the quality they currently offer,’ says Harden editor Richard Harden.

Elsewhere, a report by hotel constultancy PKF claims London hotels are still suffering from the effects of international uncertainty. Profitability in the sector has dropped in the past year by nearly 6 per cent and many are being forced to tighten their belts.

He concedes that the ‘design hotels’ may have to re-evaluate their offer. ‘Customers don’t want the fashion-statement approach. And they don’t want to be startled or overwhelmed by the interiors,’ says Orr.

Jestico & Whiles associate Sniez Torbarina agrees ostentatious hotels have had their day. ‘In the future, hotels will have to be well-designed, but not over-designed or overwhelming. People want tactile, environmental qualities and intangible as well as tangible elements,’ she says.

Torbarina believes quirkiness is highly valued by hotel customers: the group is working with Malmaison on a hotel in a former prison, Oxford Castle. Larger chains are associated with luxury and efficiency, but small hotel groups must give guests something to ‘discover’, she says.

Others disagree. The high-end, corporate hotel is alive and well, argues Hilton Hotels fixtures, furnishings and equipment manager Stuart Etherington-Brees, who joined Hilton from upmarket restaurant and nightclub Sketch in May. Ostentation, too, is still highly prized, he says.

‘Sketch has been very successful. It’s something new, it hit a chord. People don’t just visit it once, they come back. It’s an adventure,’ he says.

Although an international chain, Hilton distances itself from overt branding, says Etherington-Brees. ‘There’s no corporate design language, we take each site on its own merit.’

With demand for rooms slowing, the growth in ‘lobby culture’ may be large hotels’ saving grace. Popularised at Schrager’s hotels, particularly The Sanderson and St Martin’s Lane, lobby cocktails are now de rigeur for a certain tranche of society.

A spokesman for Hilton says the Rockwell Bar at Hilton’s Trafalgar Hotel, by Argent Design, ‘has contributed to [the hotel’s] success’.

It’s a trend not lost on City Inn Westminster. The hotel’s Millbank Lounge and City CafÃ© aim to establish themselves as major destinations in London, particularly in the relatively sparse Westminster area.

Lobby culture is ‘hugely important’, says Orr. ‘In the transient atmosphere of hotels, attracting local residents and business people enriches the ambience of the entire hotel.’

Designer may act on Impulse