Misty Buckley was never supposed to be a production designer. Born and raised in London, she opted to stay in the capital for university and joined the fashion design course at Camberwell College of Arts in the late 1990s. “I realised very quickly that I was no tailor,” says Buckley. While she was supposed to be designing garments as part of the course’s textiles module, she decided to put on a fashion show to showcase the other students’ work instead. Taking over the college’s canteen, Buckley even managed to convince model agency Storm to provide free models for the show. “We had this incredible evening where we were turning away hundreds of people because we couldn’t physically stuff them all into a canteen,” she says.

It was during the fashion show that Buckley says she first realised her calling was designing for live performances. After being invited to join the fashion design course at Central Saint Martins, she quickly decided to switch to fine art instead. Following her graduation in 2002, one of Buckley’s first jobs out of university was as a production assistant at annual music awards ceremony the Brit Awards.

Fast-forward just over a decade, and Buckley has come full circle. She is currently putting the finishing touches to the set for this year’s Brits, where she now heads up the production design team. The designer has also worked on world tours for the likes of Coldplay, Take That and One Direction, as well as designing sets for large-scale live events such as The London 2012 Paralympics closing ceremony.

This will be Buckley’s second year heading up production at the Brits. While she is keeping schtum on most of the design detail ahead of the event, she does reveal that she has created a “piece of sculpture” inspired by this year’s metallic red statue by sculptor and designer Anish Kapoor. Brits Chairman and CEO of Sony Music, Jason Iley, adds that he has given Buckley an “open brief” again to allow her the “freedom to be creative”. The designer has also worked on creative treatments based on her sculptural set for a number of artists performing at the ceremony, among them Dua Lipa, Rag’n’Bone Man and Foo Fighters. 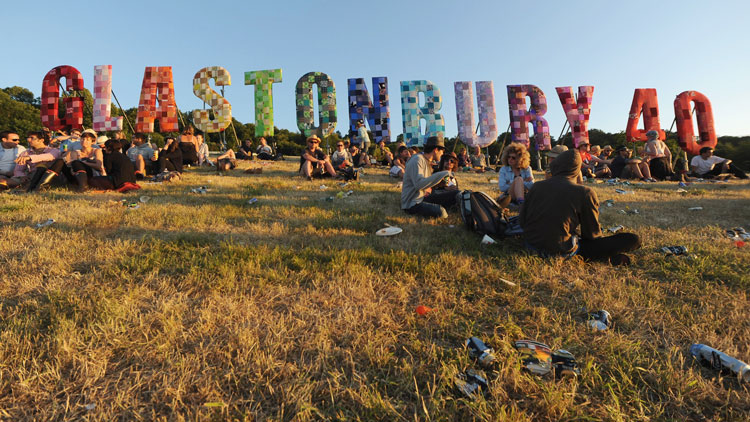 While the team at Buckley’s eponymous studio comprises a core group of five people, this expands at different points of the year for large-scale events such as the Brits. During Glastonbury festival, this number swells to as many as 130 people. Buckley and her husband Reg Buckley lead what she describes as a “company of creatives” that they have collected over a number of years, encompassing carpenters, painters, illustrators, sign writers, scenic artists, welders and more. Together, they work on the creative direction for various fields and areas around the festival, including The Park stage.

Unsurprisingly, it is easily one of Buckley’s biggest jobs of the year. So much so that after having her second child, she made the decision to move her studio to the usually sleepy village in Somerset where Glastonbury takes place. “It’s so bizarre to be in a village where popstars and managers will come down for their meetings,” says the designer. “It has a real pull for people, but then I suppose it is such an iconic festival.”

Along with Buckley’s team of 100 plus people, there are hundreds of other artists, creatives and builders that work in each area of the festival, bringing the total number to roughly 30,000. “Every single corner of Glastonbury has been thought about, in that somebody has had an idea about how to create and decorate their space. Anything goes – it’s like being on the best art course ever,” she says.

But it’s not all fun and games. During the three-week site build period, Buckley and her team face gruelling eight til late days and the prospect of having to battle the elements (a common feature of the festival). “It’s really hard conditions and takes a very strong will. At some point, everybody has a little breakdown. We love it, but we all come out of it shell-shocked like we’ve been at sea for three weeks,” she says. 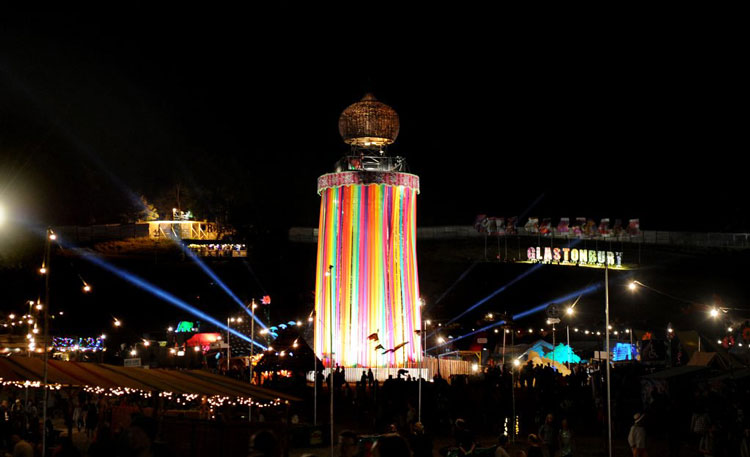 While Glastonbury preparations are ongoing, Buckley is usually working on projects that won’t start rehearsals until up to a year later as well. Over the years, the designer says she has learned to tap into both sides of her brain simultaneously. “You’re in that creative phase for some projects where it’s all about inventing and imagining, but then you’re also in this production mode where you’re like ‘how big should that be, and how’s that going to come through the doors?’” she says. “I’m constantly flip-flopping between the two – it gets me going, but at the end of every day, I’m exhausted.”

While Buckley describes her design aesthetic as hugely “varied” and “visceral” depending on the nature of the project, a big part of her creative process is establishing close relationships with the artists she works with. The designer’s longstanding collaboration with Coldplay is a testament to this approach. “I remember the first project I did with Coldplay for Glastonbury, when I made a model version of the Pyramid stage for them and put all of the little scenery and set details on it,” she says. “I remember their faces because they’d never had a model presented to them before – they were just like children. But it really does help artists understand the space that they’re going to work in.”

Apart from relationship-building, Buckley’s advice for people looking to get into production design is – surprisingly – not to study production design. “No one who works with me has done a production design degree,” she says. “I don’t know how important it really is because the job is so much about using your instinct. Whether you come from a photography or fine art background, there are so many routes in.”

The other aspect of the job that Buckley circles back to time and time again is just how exhausting it can be. A stadium tour for instance, she says, consists of anything between 12 and 20 hour days in freezing conditions, and requires you to have a knowledge of everything from leading a team to practical skills such as rigging. “It’s not all hanging out with popstars and flying on nice airplanes,” says Buckley. “If the set falls down in the middle of a live event and there’s no one else around, you need to be able to go and fix it yourself.”

The Brit Awards take place on 21 February 2018 at the O2 Arena in Greenwich, London. It will be shown live on ITV at 8pm. 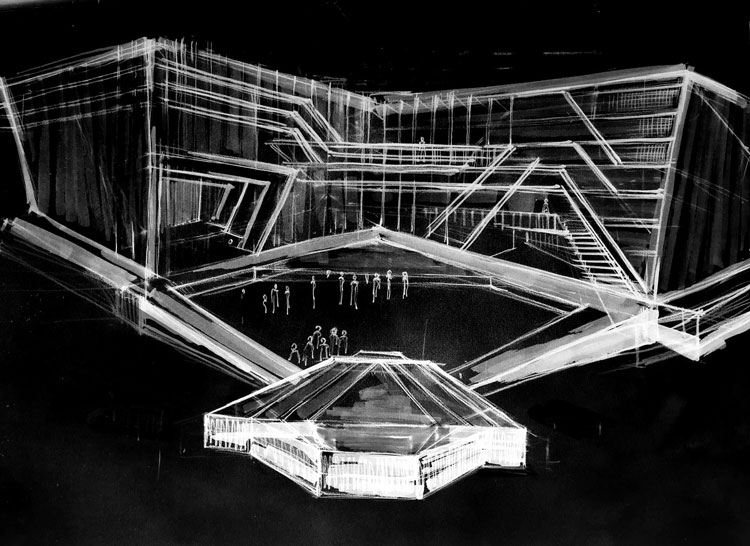 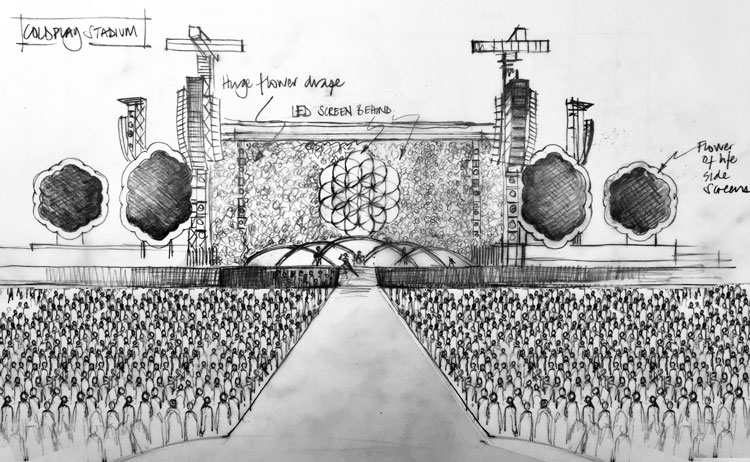 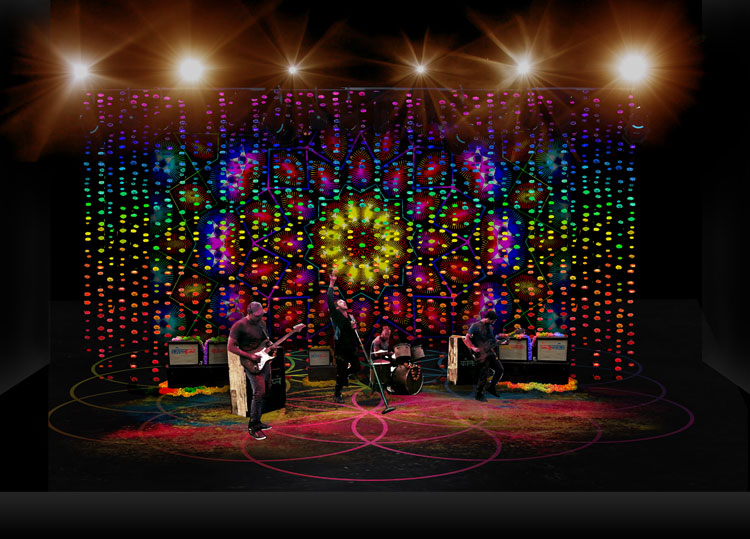 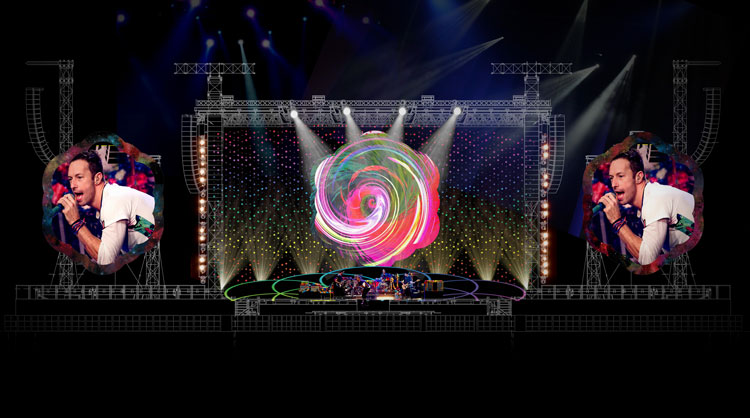