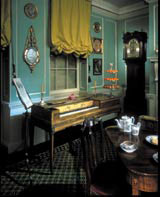 The Geffrye Museum is looking to appoint designers to work on the planned overhaul of its 17th and 18th century domestic interiors rooms. The improvement of the two rooms marks the final stage in a series of developments made throughout the museum since it became an independent trust in 1990.

Director David Dewing says plans for the rooms are in the research phase. ‘We are looking into the nature of the middle class of London during these periods. We are trying to find out who they were, what they bought and why,’ he explains.

After research is complete, Dewing will add to his staff. ‘We will be looking to add a designer to the team soon [and] will invite a number of individuals or practices in to show us what they do.’

Dewing says that the work is scheduled to begin in spring next year and he hopes that it will be completed by November 2005. Funding for the project was given a boost last week, when the Department of Culture, Media & Sport and the Wolfson Foundation awarded the Geffrye Museum a £258 000 grant, as part of a £1.1m endowment given to six museums in London.

The scheme has awarded the Transport Museum £200 000 to help fund ‘The First Metropolis Gallery’, which forms part of a wide-reaching £18m improvement programme at the Covent Garden site (DW 31 July 2003). Situated on a new mezzanine floor, the Ralph Appelbaum Associates-designed exhibition will act as the starting point to the redeveloped museum, housing 19th century exhibits.

Other recipients of the DCMS/ Wolfson grant include the British Museum, for access improvements; the Courtauld Institute of Art; the National Gallery for renovation; and the Imperial War Museum for lighting upgrades.

The DCMS and the Wolfson Foundation have each contributed £2m to the fund, creating a £4m investment resource for the improvement of museums and galleries in the UK.

Why buy a round when you could buy a Chooba?