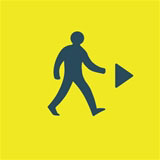 Ambitious plans to improve the walking experience throughout central London will enter public consultation this week, following a two-year study by Applied Information Group. There will then be a tender to appoint a consultancy for the implementation of a new signage scheme for the capital.

The Legible London programme is an attempt to overhaul the wayfinding system in inner London to encourage more journeys to be completed on foot. Although initially focusing on the Congestion Charge zone, the project has been extended to include regions in the east of the city where the 2012 Olympics will take place. It is funded by Transport for London and led by the Central London Partnership.

According to CLP chief executive Patricia Brown, funding is still being sought for the development of the project, although there are plans to run pilot schemes based on AIG’s proposals, potentially in the West End and South Bank.

‘At present, we have a proposal for a way forward, which will be tested before we move into detailed planning. Then we need to ask how much room is needed and how it will be maintained and funded,’ says Brown.

AIG was appointed in 2004, following pre-tender studies carried out by Fitch, which did not pitch for the contract. According to Brown, AIG will be involved in the scheme for ‘the immediate future’.

One aspect of the consultancy’s proposals is based on the idea of ‘progressive disclosure’, a system used by road signs where more detailed information is revealed as travellers approach their destination. ‘There is not a lot of trust in the city’s sign systems because there are so many different sign types and they are unpredictable,’ says AIG creative director Tim Fendley. ‘When people navigate they learn about little bubbles based around certain points, usually Tube stations. We need a map that is designed with an understanding of how people walk the streets.’

An exhibition at New London Architecture and a website at www.legiblelondon.info will gather data about the way people view the capital’s geography. It will also collect examples of effective and poor signage.

• 44% of pedestrians use the Tube map to navigate

• 32 different types of sign for walking in central London

Alan made me feel special again as a young designer