The identity for Football Beyond Borders (FBB), a UK charity that educates young people through sport, has been updated by design studio Alphabet.

While the logo remains the same, the graphic and visual system — including typography, colour palette and set of icons — have been updated.

The charity was established in 2012, following the London riots, as a way to support young people from disadvantaged backgrounds through organised football games. 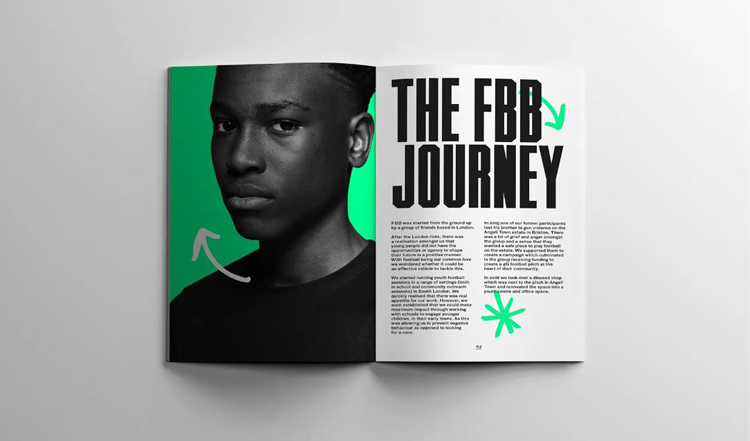 Sam Lane, co-founder of the Manchester-based Alphabet says: “Our goal was to create a lively modern brand which resonated well with a younger demographic in order to keep them engaged with the charity.”

“We also needed to ensure the brand could flex enough to work in a more corporate setting, attracting investors, professional athletes and public speakers,” he adds.

The studio created a hand-rendered iconography pack — containing arrows, asterisks and circles — which can be used on imagery. Lane explains that the marks were made to look those you could find in the back of a school exercise book and on a formation diagram for football tactics.

“Our aim was to blend these two references to create a unique icon suite that brings real versatility to the brand when combined with imagery and typography,” Lane says.

FBB often uses headline-like copy for its visuals, with questions like: “What makes a man?”

In an attempt to maintain this structure while also “bringing diversity” to the messaging, Alphabet combined two typefaces — Timmons NY and Druk Wide — for the typographic system.

Timmons NY is condensed vertically and Druk Wide is condensed horizontally, which brings “versatility” to how the copy appears.

“A real feel for the personalities”

Hand-written lettering is used alongside with this typography on campaigns, creating a contrast for the visuals. The lettering was again inspired by the young people involved with the charity, according to Lane. 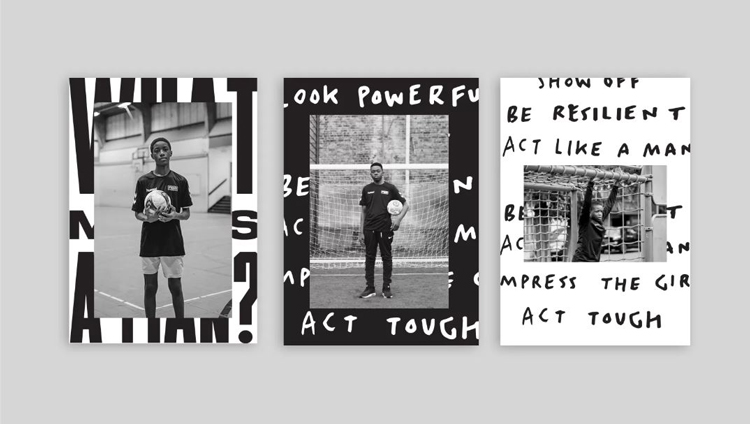 The designer also says that the studio used some of the original worksheets from FBB sessions as a starting point. The team then vectorised the writing and combined them with the photography in an attempt to “get a real feel for the personalities of the children and the culture of FBB”.

Digital elements are “very important touch points” for FBB, Lane says. As a way to engage with the charity’s targeted audience, Alphabet created assets that could be used across social media channels like Instagram and YouTube, as well as the FBB website.

These included a “digital tape device” — which can be used to break up images — and stickers that can be layered with typography, photography and other brand imagery to “create interest and unique compositions”.

The previous branding used a darker green colour with black and white as its colours. Lane says that while a three-colour system was retained for “simplicity”, the green was altered to have “much more vibrancy and punch”.

The new tones “help the brand stand out, particularly across digital channels”, according to Lane.