Templo has unveiled the identity for the Interconnected Disaster Risks 2020/2021 report, using colliding graphics to show how different events are connected to one another.

The report was written by scientists at the Institute for Environment and Human Security. The institute forms a part of the United Nations University, the academic arm of the organisation which acts as a kind of global thinktank.

Templo was brought on to the project having worked with the UN before on projects, like the organisation’s brand storytelling.

From coral bleaching to Texas weather

Information gathered in the flagship report details how the frequency of severe weather events, epidemics and human-made disasters is increasing globally.

It focuses on ten events from around the world which took place in 2020 – with a list as diverse as coral bleaching, extreme cold weather in Texas and the pandemic – and uses these to make the point that it is crucial we understand these events like these and how they interconnect, in order to know how they may affect us in the future.

It’s a complex set of data, and Templo creative director Pali Palavathanan says it took a considerable amount of time to develop a visual system that could convey the information in an accessible way.

“It took about six weeks for us to develop the concept, and about two weeks of this was dedicated to actually understanding the data ourselves,” he says. 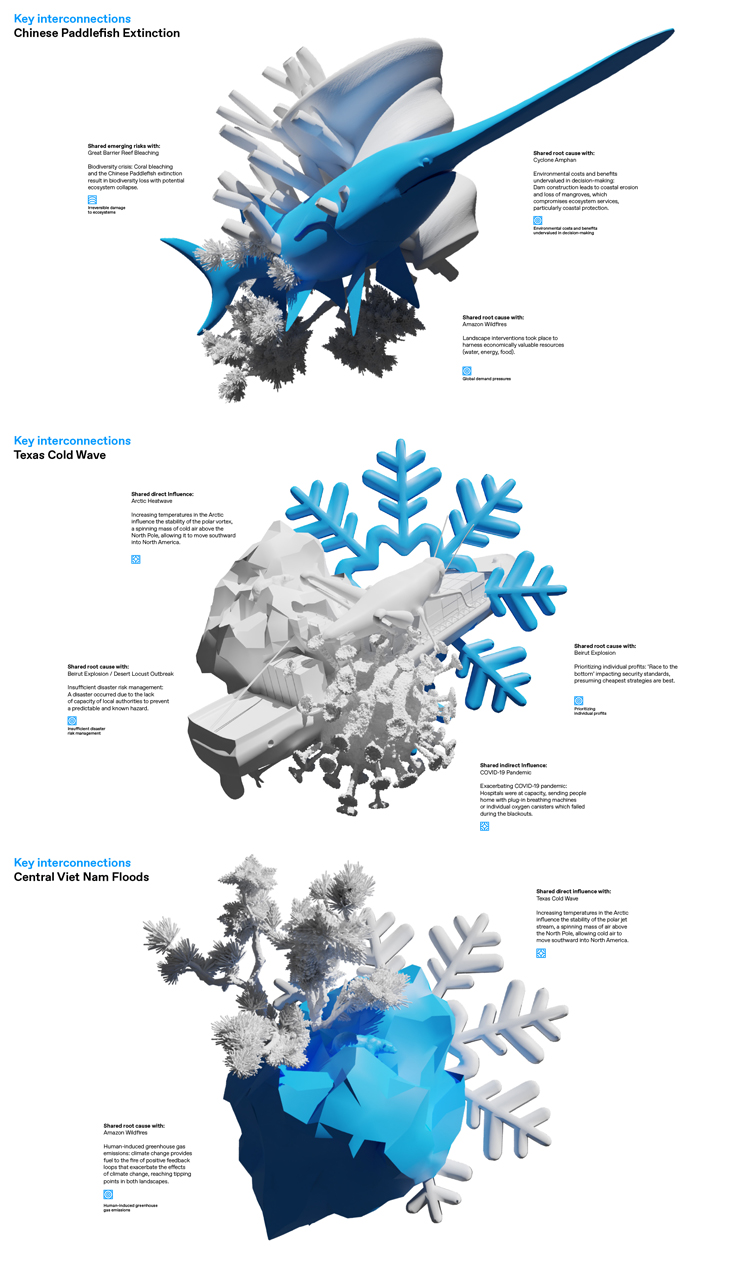 The concept the Templo team settled on drives the entire identity. Designers used the ten events detailed in the report and created an interactive 3D model of each. To illustrate the relationships between specific events, these models are combined to create striking “collisions”.

The Chinese Paddlefish Extinction, for example, shares several root causes and emerging risks with other disasters included in the report. The extinction and the Great Barrier Reef Coral Bleaching, both result in a loss of biodiversity (a shared emerging risk); and the extinction and the Amazon Wildfires both happened because of landscape interventions to harness economically valuable resources (a shared root risk).

A graphic depicting these interconnection then showcases the fish spliced with a bleached coral reef model and the charred tree branch model. As Palavathanan explains, this visual language started as a way of understanding the data, and then was adopted as the report’s actual identity.

“We had to create a way for people to see how the events cross-pollinated with each other,” he says.

“Connecting with the data in a closer way”

The interconnected theme is extrapolated elsewhere in the identity. Words are linked and layered over photography, to again show how everything relates.

Palavathanan says this particular project was unique because of the close contact the Templo team had with the scientists who conducted the research. “It was a really collaborative effort of co-creation,” he explains.

Beyond the identity itself, the team has also designed an interactive digital experience of the report, as well as explainer animations, social media assets and other videos.

It was important for the team that the information felt accessible, Palavathanan says, particularly for the digital experience. “Diagrams can help scientists, but they’re not necessarily the most engaging thing for the public to read,” he says. “With this users can browse all of the references in the report and connect with the data in a closer way.” 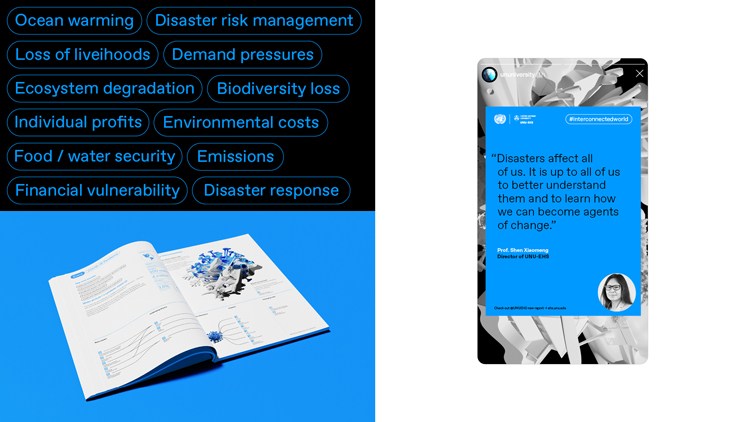 What do you think of the project? Let us know in the comments below…