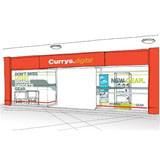 Dixons moves on-line, while Currys goes digital on the high street, in line with a predicted boom in the Web technology market, says Clare Goff

The retail industry let out a collective gasp of surprise this week as Dixons announced it is to abandon the high street. The 70-year-old brand is ditching its ‘bricks’ to focus on increasing its ‘clicks’ in the on-line consumer space.

No sooner had the announcement been made than the removal men began shifting the old to make way for the new. In four stores across England, the Dixons brand has already been replaced with the new Currys.digital logo. The red in-store signage and graphics have been updated with a new lime-green palette and the stores are being united around a new ‘ahead of the game’ design concept.

Much of the latest brand strategy was created in-house at DSG, following extensive customer research. But design consultancy Household was brought on board early last year to develop the tone and personality of the new retail concept and to produce in-store graphics and point-of- sale insignia.

The branding will eventually roll out across all former Dixons stores, but, as the designs are currently in the initial stages, graphics and interiors are expected to evolve over time. ‘The look and feel are different. It’s more contemporary,’ says Anna Burleigh, brand marketing director for mixed electricals at DSG.

In-store product ranges will initially be similar to Dixons’s – specialising in gadgets and computing technology – but there will be a new emphasis on ‘assisting the high street shopper to get access to the products available’, according to Michelle Du-Prât, insights director at Household. Spaces for play will be incorporated into the stores, allowing customers to engage with new technology, she adds.

Eventually customers will also be able to buy the white goods currently sold by out-of-town Currys stores, largely through on-line links to its range. Burleigh claims that the store’s wide range and competitive prices will allow it to stand out on the high street.

Dixons has been suffering from rising competition on the high street as both low-end supermarkets and high-end technology retailers, such as Apple Computer, muscle in on its territory. In recent years, it has been forced to close down more than 100 loss-making stores – reducing its high street presence by a third – and sales fell by 14 per cent, according to DSG’s 2005 annual report.

Paul King, retail director of Vivid Brand, says that the move is a sensible one in a fast-changing environment. ‘Previously, the Dixons and Currys brands were in competition with each other and the market relied much more on brand loyalty,’ he says. ‘Today the market is much more fragmented and everyone is selling electrical goods.’

While Dixons will focus on the early adopters who are more likely to use the Internet to buy technology, Currys.digital is aiming to carve a niche in the mass market as an electrical goods retailer that can offer expert advice and guide consumers through the bewildering array of products.

King believes mass market stores sometimes make the mistake of talking down to customers or bombarding them with offers, but, he says, there is a clear gap on the high street for a retailer that can ‘explain new technology to people like my mum’.

Dixons will be investing heavily in both the design and functionality of its website in the coming months, as it eyes up a leading slot in the market. Chief executive of DSG John Clare aims to take £1bn of the on-line technology market, currently worth £1.9bn, which is expected to reach £4.6bn in the next five years, according to figures from Verdict.

The decision to turn Dixons into a pure-play, on-line retailer, and to roll out Currys.digital on the high street is expected to incur costs of £7m, but will allow DSG to make cost savings in the region of £3m per year, primarily cutting down its marketing outlay.

But building a new brand on the high street is not an easy proposition and some have questioned the company’s decision to pull the arguably stronger Dixons brand in favour of Currys. Tim Greenhalgh, managing creative director at Fitch, has worked on store design concepts with DSG in the past. His initial reaction to the group’s decision was one of ‘shock’, but, on reflection, he says it makes perfect sense. ‘If they do it with conviction, I think the public will get the idea very quickly,’ he says.

DSG is taking a risk to stay ahead of the game in the booming technology sector. As on-line sales continue to grow, retailers that avoid weighing up the costs of bricks versus clicks could find themselves left behind.

• Dixons was formed in 1937 as a photographic store in Southend, selling portrait photography

• Rebranded as Dixons Photographic in 1962

• In the late 1970s, it moved into new technological goods, such as video recorders and portable stereos

• DSG International also owns PC World and The Link in the UK, and other brands globally