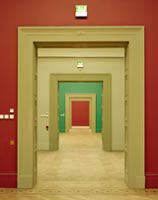 Manchester is investing more than £7.5m in design for three museums, The Manchester Art Gallery, the Imperial War Museum and the Urbis Museum, all of which will open next year.

The Manchester Art Gallery re-opens in May 2002 after a £35m redevelopment and four years of construction work. Under architect Michael Hopkins and Partners scheme, a new extension has doubled the museum in size. Casson Mann has designed the Manchester Gallery, the ground floor space showcasing art, design and architecture collections relating to Manchester. The idea is to create stories within the city and make it more engaging for the public, without resorting to a chronological order, says designer Roger Mann. The content features some ten stories that link old and new characteristic of the city, and their exhibition design is loosely based on an urban grid concept. The fit-out budget for the Manchester Gallery was £500 000.

Casson Mann is also designing a second gallery, the gallery of Craft and Design, which will display around 1 300 ceramic, glass, metalwork, furniture objects. Bespoke 2m high display system cases set on light boxes have been created to suggest a theatrical effect, while a special tactile wall display has been commissioned for visually impaired visitors. The fit out budget for this gallery is £1m. The Clore interactive gallery, a space exclusively dedicated to children, is designed by London based exhibition design group Event Communications on a fit-out budget of £620 000.

The Imperial War Museum, designed by architect Daniel Libeskind, will be completed in July 2002.The stunning steel building has regenerated a five acre waterside landscape area on the edge of the Manchester Ship Canal in Trafford Park. The £28. 5 m project will house six exhibition areas. Exhibition design is by Real Studios, the audio visual design by Event Communications and signage and corporate identity is by Agenda Design Associates (DW 24 May).

The Urbis Museum of the modern city , due to open in May, aims to be the first centre dedicated to peoples experiences of the metropolis. Housed in a glass skinned building by architect Ian Simpson, it features four floors of permanent interactive exhibitions which will be reached by an indoor funical ride. The exhibition design is by At Large, Land Design Studios and Event Communications. Urbis is a £23 m building with an additional design budget of £7m.

Xmas antics can cause more than red noses

Creative talent should be nurtured across all sectors