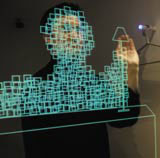 The work of New York design group Antenna show signs of the evolution that may help change the way designers see the future of digital media and communications.

By applying interactive thinking to its installation and environmental designs, it is opening up new spaces for digital media to explore in projects such as The Emperor’s New Clothes installation at New York’s Artists Space and the recent Power Flower interactive window display at Bloomingdale’s.

Although Antenna is working in areas such as Web design, you can see a fresher, more innovative spark of creativity when setting its interactive work in public spaces or any space outside of people’s computer desktops. In effect, when Antenna thinks about digital design, it is in terms of the physical and the spatial.

It’s hardly surprising that founders Sigi Moeslinger and Masamichi Udagawa both have product design backgrounds. Antenna’s portfolio of projects is full of elegant product developments for Leo Burnet, IBM and Fujitsu, as well as successful large-scale projects such as the design of a range of MTA/New York City Transit subway train carriages.

At first, it’s difficult to relate the two usually disparate interactive and product design specialisms, but in talking to Antenna, a single thread of thinking emerges. ‘We establish a physical exchange between the user and what we design, which is meant to deliver an emotional reaction,’ says Udagawa. ‘We can judge how successful our prediction was by observing people’s physical reaction.’

This ‘physical exchange’ was evident in the MetroCard Vending machine design now used across the whole NYC Transit system. Antenna produced both the hardware and the interface design – an unusual circumstance that needed a detailed understanding of product, but also of classic information design in developing the screen interface.

It’s interesting that Udagawa thinks that ‘it was natural to see the application of digital technology as an extension of (the) reciprocal nature of products and environments. Therefore, we do not think that, though physically flat, screen design is a two-dimensional problem.’

Antenna is in effect a company offering a ‘hybrid’ specialism. By seeing its work as environment, there is little difference in its thinking in designing the physical space of a train carriage or the space where people encounter computers. This has led Antenna to consider all aspects of how people use computers without any assumptions.

Antenna gets ‘physical’ with the actual components of the computer, the screen or projection, the input device, and the way computers respond to people, allowing them to progress ideas beyond the mouse, desktop, keyboard metaphor. This desire has led to the group testing its interests in theoretical digital experiences, developing more interactive installation work. Its projects are often experimental art installations outside any commercial context because the format allows a flexibility to drive this pursuit without the usual compromises. In the past two years, a whole series of art installations have been created based on active audience participation.

The Emperor’s New Clothes Interactive Installation exhibited at Artists Space in New York is set as a faux shop/boutique display. Visitors are encouraged to pick up one of five illuminated coat hangers and take it to an adjoining fitting room. Setting the hanger down on to the hook illuminates a large display that acts like a ‘magic’ mirror that floats animated images on to the viewer’s reflection. Each hanger invokes one of a series of interactions that react to the visitor’s body and movement. Some of the narratives mimic the visitor’s behaviour, but alters the setting and the meaning, like seeing yourself in a parallel existence.

Moeslinger explains, ‘Our day-to-day information exchange happens a lot in the material world through appearance, tactility, gestures, what to wear and where things are placed. The physical properties are really key.’ Using digital interaction with the sensory qualities of the material world allows ‘environments that are familiar and comforting to also be strange and evoke new sensations’. And that, Moeslinger feels, ‘is really exciting’.

One such commercial project has allowed Antenna to experiment with interaction by casual participation. The recent Power Flower window display for Bloomingdale’s on Lexington Avenue is an installation of light and sound. A series of neon flowers bloom when passers-by unknowingly activate a series of motion sensors along the store’s front windows. The effect leaves a wave-like trail of neon flowers in the wake of every passer by. It’s an interactive space that engages people by their presence rather than their consent. Moeslinger thinks that, ‘The injection of an unexpected reaction in an everyday situation may interrupt people in their path, slow them down and heighten awareness of their environment or even of themselves.’ The installation seems to have been a success in invoking a kind of digital self realisation.

‘It was very funny to observe the process of someone first noticing something odd going on,’ says Moeslinger, ‘then finally realising that the flowers are responding to their own movement. Some people would walk back and forth or even dance. Others thought the window was a touchscreen. From listening to conversations people had, they often thought the system was much smarter than it actually was. People seem to project their own ideas on to what they see.’

Another project Blowing Gently, an installation at the Frederike Taylor Gallery in New York, a set of inputs shaped like bubble-blowing rings allow visitors to blow through the input activating the interactive space.

In effect, the visitors breathing unfolds the chain of events. The exhibit includes a large table setting that displays the projections of characters, invoked by a visitor blowing through one of two bubble rings set at each end of the table. The characters react, dance and collide. Characters generated by either input compete and jostle together. They appear to gently fade when the visitor stops blowing. ‘The experiments are always a test of our hypothesis about human behaviour,’ says Moeslinger. ‘Our installations are a physical embodiment of the hypothesis. We always learn something we didn’t know from the experiment.’

It’s an important kind of work. As a network, the Web is expanding out of all comprehension, but as an innovative experience, it has become static like a keyboard on a desk. This type of work seems to transcend creative Internet design by its pure physicality and a rediscovery of experimentation with both the hard and soft parts of the experience.

And Antenna is continuing to ‘learn’ from its installation work. ‘We are working on another project with the working title Cherry Blossoms,’ says Udagawa. This will go up in late April at the Cooper Hewitt Design Museum in New York. The installation is a part of the museum’s Design Triennial show.

‘We are setting up a 7m-tall tower,’ says Udagawa. ‘Projected cherry blossoms, lingering at the bottom of the tower, will be aroused and whirled around by the visitors ascending and descending the staircase.’ The Marcel Duchamp reference, the father of all mixed media, somehow seems appropriate.