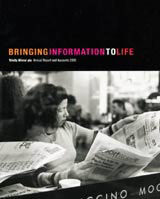 Trinity Mirror was the result of a merger of a regional and national newspaper group in September 1999.

The report at merger time was a reflection of the two companies coming together, and was in two halves. ‘We were so new together, we couldn’t stand as one,’ says Nick Fullagar, Trinity Mirror’s director of communications, ‘The figures were separate.’ Designed by The Workroom and project managed by Merchant, the report worked as two books that folded out.

‘Then there was a long period of thought about the direction. The tone of the middle report [in 2000] reflects this,’ says Fullagar, ‘It’s a very quiet report. It aims to explain the component parts of what we do in a logical progression.’

Robert Moser at Merchant backs this up. ‘The first true annual report we did for Trinity Mirror was a pretty straight document that described the business.’ This was also designed by The Workroom, again through Merchant.

Then in 2001, Navy Blue created something entirely different. ‘Fundamentally, our business is about newspapers,’ says Fullagar, ‘This latest book was a restatement to people of what our core competencies were, and to explain this highly complex business.’

Borrowing heavily from the world of printed news, this report is A3, black and white, and written in non-corporate speak by an ad agency copywriter. The first 13 pages are about reputation management rather than annual reporting. ‘The 2001 report was the turning point,’ says Moser.

A pair of pants