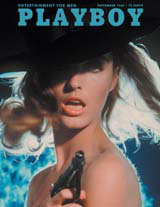 Nudity aside, Playboy was once a high-brow lifestyle magazine that broke new ground with its inventive and witty covers. Yolanda Zappaterra previews an exhibition that reveals why the bunny lost its hop

When Art Paul turned Hugh Hefner’s idea of a sophisticated rabbit about town into a bow-tied black bunny outline, he created one of the best known icons of the 20th century, and a men’s magazine which, for a good two decades from its 1953 launch, was the height of editorial style. Kicking off with a naked Marilyn Monroe in its launch issue, Hefner and his art director Paul, both graduates of the Chicago Art Institute, established a sophisticated men’s lifestyle magazine which reflected the views of the post-World War II generation, through both content and art direction. Aaron Baker, Playboy’s archivist and curator of Playboy Exposed – an exhibition opening next week in London – suggests Paul was among the first to approach magazine design as an artist.

‘Under his direction, Playboy became a gallery you could hold in your hands. He referenced Abstract Expressionism, Surrealism, and the aesthetics of jazz. Most of all, he had a light touch. If you look at the covers that he designed, they are so beautiful, often employing one large, central image and little or no type, and they have an economy of means that is amazing. They are clean and concise, and yet they have an undeniable whimsy and sense of humour,’ he says.

A large part of this sense of humour lies in the photography, drawing on the likes of Helmut Newton and Thierry Mugler, which helped Paul produce spreads that bore a classical, backward-looking beauty, suffused with a forward-looking sassiness that was sexy, powerful and contemporary. ‘Stylistically, I think we helped steer magazines away from the traditional, black and white appearance of 1950s Esquire, and towards a richer, sensory reading experience,’ suggests Baker. Somewhat more controversially, he also says, ‘I believe it’s fair to say that we changed the way in which people look at women – that we elevated nude photography.’

The work of Playboy’s regular photographers is also strongly in evidence here, and shows just how much they contributed to making the magazine the classiest-looking shag mag on the block. Pompeo Posar, Dwight Hooker (who went on to become an architect) and Alexas Urba – even their names were classy – helped deliver a distinctly high-brow enterprise, with their shots of the world’s most gorgeous women, and covers that were inventive, witty and delightful. 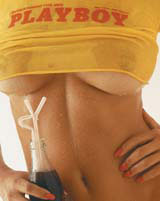 But Playboy Exposed also shows the problematic middle-aged years, when competition from less sophisticated, one-handed reads forced Playboy away from the musings of John Updike and Lenny Bruce, and into a less subtle direction. By the mid-1980s, covers were becoming less witty and more pneumatic. The magazine embraced rampant Reaganism and the decade’s ‘greed is good’ ethos, which fed into an obsession with body-sculpted muscles that exhibited a hardness that changed the visual appeal of the magazine forever.

Playboy, the brand, may now be as buoyant as it ever was, with controversial brand extensions – sometimes aimed at school children – that have taken it into Debenhams, Argos, and WH Smith. Then there are the media moves that have made the most of emerging technologies, but the success of Playboy the magazine is less assured. Its close alignment with rap and the use of ‘celebrity guest photographers’, such as the late Ol’ Dirty Bastard, Outkast’s Andre 3000, Nelly and Xzibit, smack of jumping on to a bandwagon whose attitudes towards women and sex is at best misogynistic and at worst downright nasty. As the late ODB told Playboy.com, ‘I’m nasty like Playboy… Playboy is the shit. It’s dynamite. Playboy gets down forever.’ Whether it does or not, only time will tell, but, visually, can it ever regain that sophisticated cool and urbane wit it once had? Take a trip to Camden and judge for yourself. •