In 2015, LEGO became the world’s largest company by revenue, taking in sales of £1.6bn. The toy company was founded in 1932 in Billund, Denmark (where Innovation House, LEGO’s design headquarters, is still located) by Ole Kirk Christiansen. Its name is derived from the Danish words leg godt which translates to ‘play well’. There are now more than 40 ‘themes’ of the toy, from its Architecture series to Batman, Super Mario to Star Wars. It also targets a range of ages, from the toddler-focused DUPLO range to the advanced building sets of Creator Expert.

Luis Gómez has been a product designer at LEGO for seven years. Born in Columbia, he moved to New York to study toy design at the Fashion Institute of Technology. He joined LEGO in 2013, after completing an online application. “It seemed impossible,” Gómez tells Design Week, adding that he has loved the bricks from a young age (though LEGO was not widely accessible because of the country’s closed economy). “I was so impressed by the whole idea of LEGO,” he says. “You can design your own toys and build your own idea.”

LEGO runs projects by ‘semester’ and usually releases new sets in the summer and January. Depending on how big the theme is, there will be a different number of designers assigned – generally around four, though this number can increase to 10 or 12. On Hidden Side, the AR-incorporating theme that Gomez works on, there were around six designers the previous semester. At the start of a semester, each theme is given a set number of boxes at different price points to design.

Usually one designer works on one set, as it requires a “complexity” that would be difficult to manage with multiple designers. For really big sets however, Gomez says that there might be collaborations. Designers within a theme sit together, and the desks are close to each other as a way to encourage communication. There is also a ‘building table’ for each team – a big table with boxes of the most-used bricks. “Everyone sits at this table and builds together,” Gómez explains. “That way, we know what people are working on, we ask questions, we give feedback, we laugh, we chit-chat.” There are also weekly check-ins where every designer presents a ‘show-and-tell’, explaining to the team what they’ve been working on for the week.

You can change lanes, too. “People can stay in LEGO Star Wards for decades,” Gómez says, “but some of us like a little more diversity.” It depends on a “constant dialogue” with managers but “it’s possible to move around, and some projects might require you if you have a specific talent.” Even though the building is “super confidential”, once you’re inside there’s a spirit of openness, Gómez says. He explains: “You’re allowed to talk about all the projects, what movies are coming, and all the new things everyone is working on.” There’s also a spread of 39 nationalities over the design team which contributes to the creativity, Gómez says. 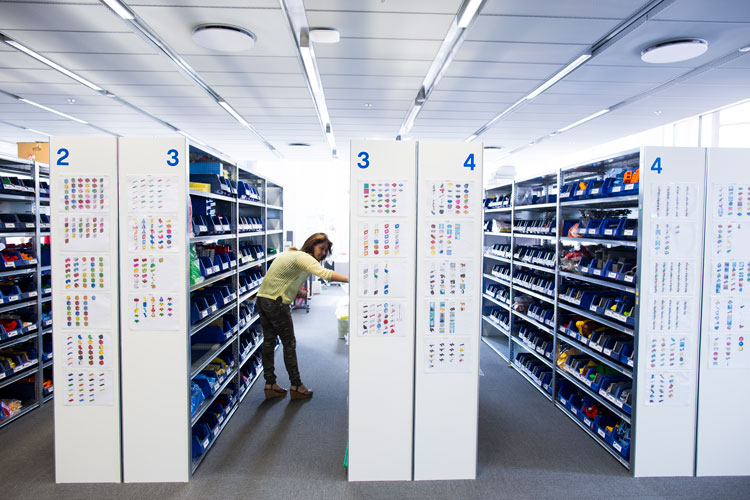 “It’s like sculpting with bricks,” Gómez says of the design process. While it depends on designers, he says that the most common starting point is a rough sketch on paper, to get the “basic function and size” down. Then “you sketch with bricks,” he says. It might not be the prettiest process. For the “first draft” of a boat, it might look like a “plate with a brick on top” but it’s just to get the scale. Then you’d start a second version, polishing different parts of the model.

Most of the work is physical. While there is computer software with all the LEGO bricks, Gómez says: “You cannot simulate gravity or how kids hold the model or if it’s stable.” In the headquarters, there is also what sounds like most LEGO fans’ dream: a ‘library’ with every single LEGO brick in existence. Designers go down many times a day according to Gomez to fill up cardboard boxes with bricks to use. “Then you go back to your desk and start building,” he says. “It’s like a kid playing at home.”

When a designer is happy with the model’s “look and feel”, it’s uploaded to a computer so that it’s safe – like saving a Word document. That part is crucial, in case a model breaks. Stories of “smashing Death Stars” – which Gómez says are not rare occurrences – would keep LEGO designers up at night. There is a “back and forth” between digital and physical designs until the deadline.

Next are safety tests for the models to check they are play-proof – “if a kid leaves it on a windowsill in the hot sun,” for example. Robots test out the mechanisms too. Throughout the entire process, kids from the local area come into the studio to test out the products – a process that is done in secret, Gómez says. Sometimes the kids even offer suggestions. The prototypes are also tested overseas.

Sets may also require a check with the Intellectual Property (IP partner) such as Disney, to check that the set “matches” their franchise. Once it’s been fully-approved, the designer receives two boxes. One is so that they can build it themselves, which is a kind of final check – “although it’s super late if things have gone wrong,” Gomez admits. Another one is for the designer’s portfolio.

Gómez says one of the highlights is the collaborative aspect of the design team, as well as the sheer range of talent – from digital and graphic designers to those who write the building instructors. There are also story-tellers, who helped with the creation of the Hidden Side’s ghost-themed world, by coming up with characters and locations in brain storming sessions.

There’s also a diversity in designers’ interests. Gómez’ first project was for LEGO Star Wars, designing the MTT space ship (which he says is one of his favourites from his time at the company) but he was not familiar with the franchise before. (In Colombia, the films were dubbed in Spanish and were “so boring”.) That meant that he brought a freshness to his design approach. He says: “We like to have a combination of hardcore fans and someone like me who has no idea about Star Wars but is passionate about making cool toys. That diversity makes things even better.”

There are also chances to slip in personal details. Gómez shows me a ship that he has built for the Hidden Side theme. He has put ‘Maria’ on the side – his wife’s name. He also used their wedding date as the ship’s license plate. “I gave it to her as a present,” the designer says. 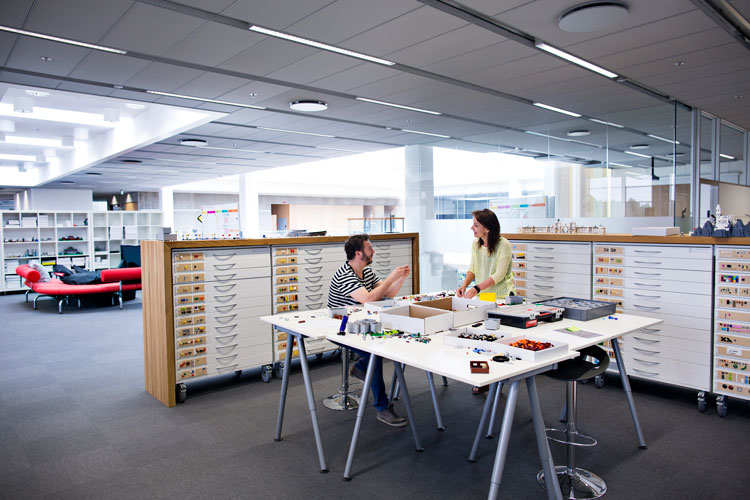 LEGO boxes have age marks, which provide guidance about the toys’ suitability. A lot of parents do not heed these recommendations, however. Gómez says that parents sometimes think “their child could build a 16+ even if they’re eight”. But a lot of careful thought and planning goes into that guidance. If a brief is for a child aged 7-8, care will go into that so a child in that age brackets can easily and quickly understand the instructions and build the toy. “We know how many bricks go into this bag, we make sure the colours are easy to find,” Gómez says. “Sometimes you want to do this amazing thing, but the brief is for kids who aren’t as old, so you have to find a way to do it.”

What do other designers do?

LEGO also employs graphic designers. Michael Patton, who works in the graphics department, tells Design Week about his “varied” role, which can include “trend hunting, concept sketching, communicating with external partners, finalising designs for production and approving packaging shots in the same day”.

Graphic designers sit in the same area as the model builders so there’s a “great spirit of collaboration” and a constant stream of feedback. “I try to block out a chunk of the day to focus solely on immediate design work and the rest can be a mixture of creating prototypes and keeping the team up to date,” he says. That might include checking production test prints and keeping track of those working in sculpting and marketing.

For graphics, considerations include working out how details will look on a LEGO Minifigure. While some details might look great on screen, they might not translate to a 1:1 scale. Prototyping is therefore crucial to the process. Another consideration is the target age of the audience. He says: “If we’re skewing towards a younger user, we’ll tend to boost any icons that will help tell the story and define the characters’ role.”

Inspiration does not have a single source at LEGO. For the Hidden Side range, the team wanted to “explore new ways to play”, using AR technology to enhance the physical product. It can also emerge from storylines in the different themes – or if a new movie is coming out, for example. One of Gomez’ highlights has been the Bat Cave he designed for the LEGO Batman theme, which is based on the film version of the superhero’s lair.

Group trips can also provide inspiration for projects. Member of the Hidden Side team went to New Orleans in the US, and sights from this trip made their way into the finished products (the theme was a few years in the making, Gómez says). The city’s Southern architecture and its harbour can be seen in the theme’s shipwrecks and ghost-town sets.

And while it is primarily known for its children toys, LEGO is always trying to attract an older audience and branch into new directions. There is also an annual ‘Design Boost’ in the spring which aims to encourage innovation. During this week, designers are able to use all the company’s resources to pitch their own ideas. BrickHeadz – which LEGO says is a “brand new way to collect build and display” famous characters – came from this week. “It’s a great chance to keep us motivated,” Gómez adds.

Design Week poll: Majority of designers have lost more than 75% of business