The Hampshire-based house is where the novelist spent the final eight years of her life, and where she wrote some of her best-loved novels, including Pride and Prejudice, Emma and Persuasion. The house was owned by Austen’s brother, Edward, who was named heir to the wealthy Knight family and inherited the Chawton Estate. 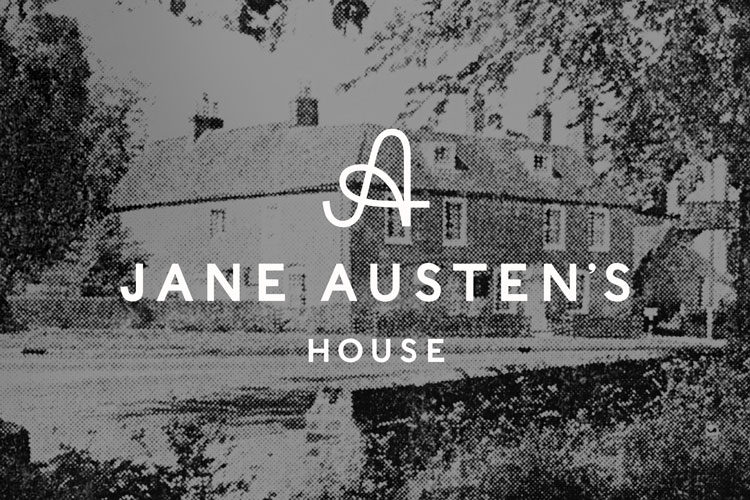 The identity is “rooted in Austen’s history and the fabric of the house itself,” according to Pentagram. It comes at a time of transition for the museum, which has a new Collections and Interpretation Manager, Sophie Reynolds.

The Grade I-listed building, and its gardens, attracts tens of thousands visitors every year, where fans can see Austen’s letters as well as objects related to her cultural legacy.

Lippa tells Design Week that it was key not to use any cliches: “We were lucky that the client was really keen to stay away from tropes right from the start.”

He continues: “It was felt that the House should be confident about its position as the most important Austen site in the world by not relying on those signifiers – the signature, her silhouette, her portrait (the accuracy of which is disputed).”

Beyond this, Lippa also says it was important for the new brand to be both “authentic and unexpected” by “drawing from the House’s rich history but presenting that history in a contemporary way”.

A “streamlined” name for a “special” experience 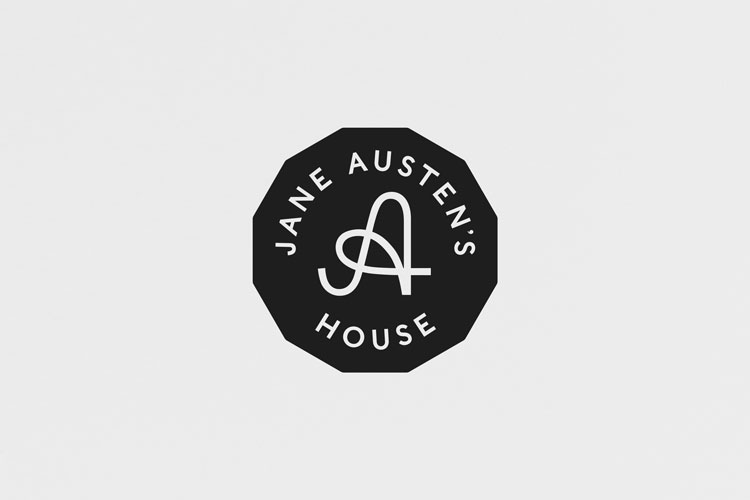 The museum is not a museum in a traditional sense, and to represent this distinction, Pentagram “streamlined” the name to Jane Austen’s House.

Lippa says that there was a lot of preliminary research for the project, but the most important stage was visiting the House itself. “It’s really special walking walking around the place and seeing the collection in its proper context,” he says. “That feeling of authenticity in the house is why we wanted the brand to be able to be quiet when it needs to be and not take you out of the experience.”

How Austen’s belongings influenced the brand

The research period involved looking at Austen’s belongings, including first editions of her books, furniture, textiles and the desk at which she wrote.

A new wordmark, for example, is inspired by Austen’s own handwriting. A monogram which combines J and A finds its origins in a letter by the author to her niece Anna in 1815. The “elegant” and “stylised” monogram gives the identity a “modern, but decorative” feel.

A stamp has also been created, which is based on Austen’s twelve-sided writing desk which Lippa says is surprisingly small. This shape is currently being used on the website as an alert about the museum’s closure during the coronavirus pandemic.

Some of the references, Lippa says, are “very much in the background”. For example, the grid system is based on the proportions of the house’s windows.

The identity rolls across print and online, from signage at the museum to social media platforms. 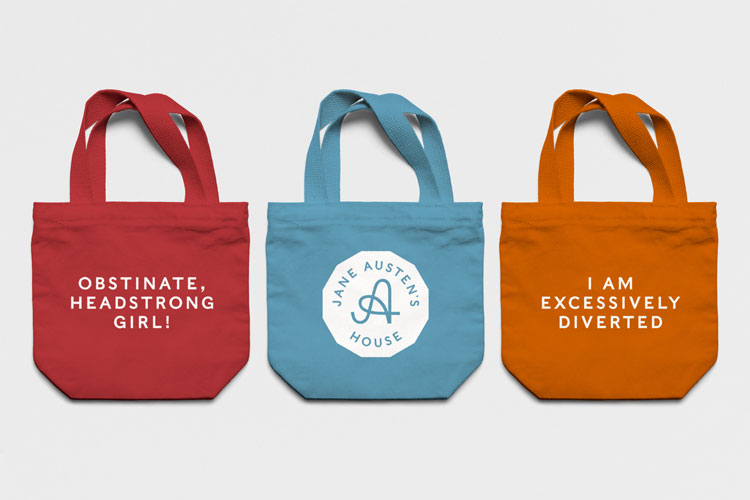 A colour palette which challenges “boring or dour” perceptions 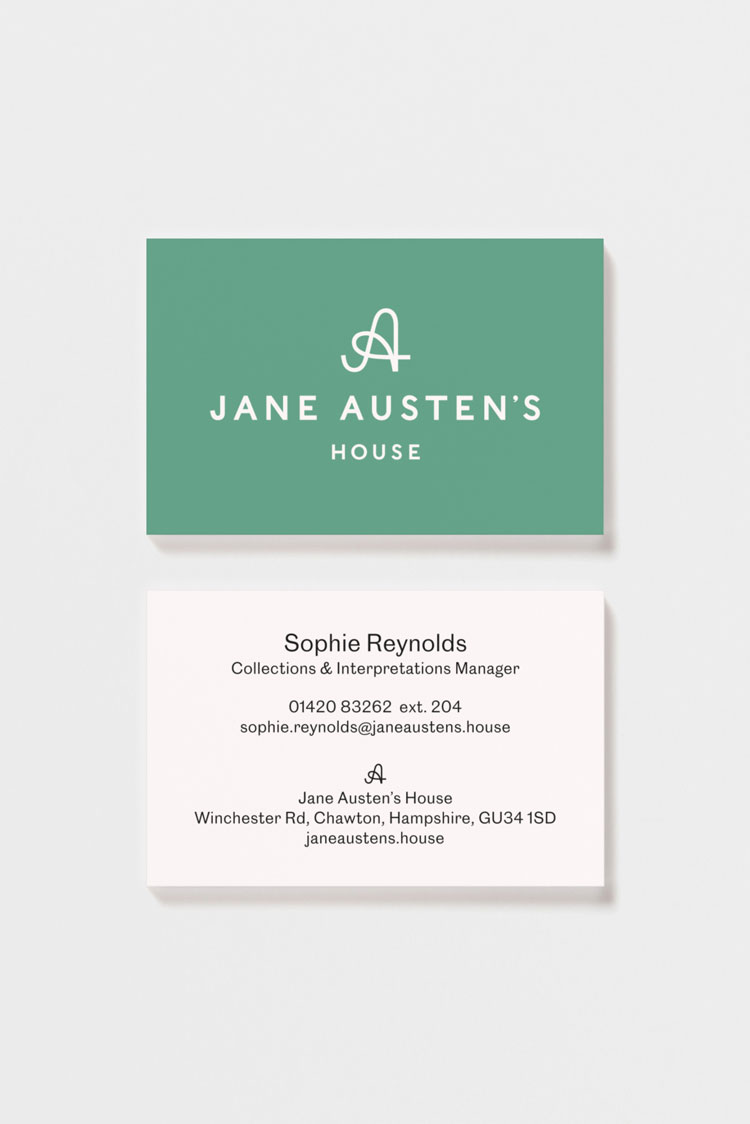 Lippa says that while the team wanted the brand experience on-site to be “quiet”, there was room to be more “expressive” in marketing and commercial applications. And while there is a tendency to believe writing of the time to be “boring or dour”, Austen’s writing isn’t like that at all, the designer says. He cites the 2020 film version of Emma – a highly comedic take on the novel about a sometimes-mistaken matchmaker – as evidence of this.

“That sense of fun is something we wanted to highlight through the use of colour,” Lippa says. The colours have been taken from wallpaper samples found in the house, which he calls “surprisingly bright”. An orange, blue and green appears on merchandise such as tote bags, as well as lanyards for staff. Tote bags also feature some of Austen’s most-loved quotations.

One of the colours in the identity is an off-white, which is based on an “ivory cup-and-ball game in the collection”, according to Lippa. Austen referred to this game as ‘bilbocatch’ in a letter.

Two typefaces have been chosen for the new identity. Caslon’s Egyptian Regular is used for headlines and the logotype while Caslon Doric is used for body copy. The former is an updated version of Two Lines English Egyptian. Caslon Doric is Commercial Type’s “modern take” on the Caslon typeface, which was originally created by 18th century designer, William Caslon.

Lippa says that the team carried out a “type investigation”, looking at “what would have been contemporaneous to Austen’s time and how she’s been presented typographically in the past – and how we could react against this”. Caslon – the first commercially available sans-serif typeface – was released a year before Austen herself died, and fit with the team’s vision. “We were keen to use something British and the fact that it was a ‘first’ resonated with our idea of Austen as a trailblazer,” he adds. 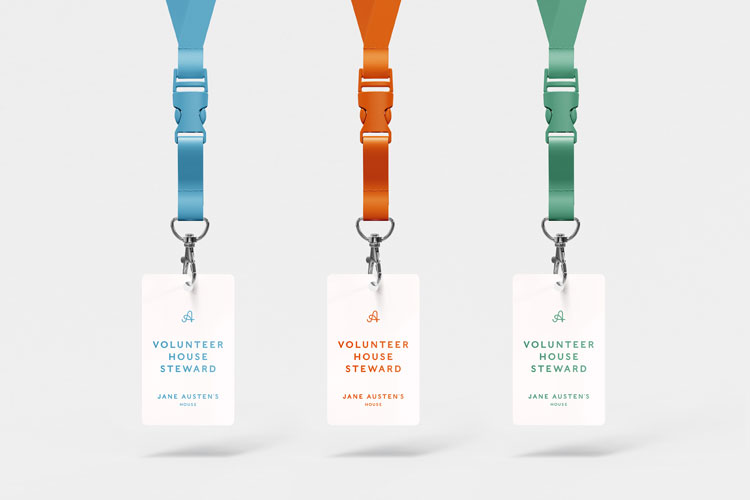