When the father of one of Bas Timmer’s friends died from hypothermia on the streets of Enschede in the Netherlands it jolted the young fashion designer into taking action by using his skills to design an adaptable product which could provide clothing and shelter for homeless people.

Timmer’s immediate reaction was to give away a hoodie he had already designed for the general market, which incorporated a scarf, but he knew it wasn’t fit for purpose so decided to innovate. What he created was an insulated waterproof jacket with a detachable bottom that when worn together gave full body coverage and protection against the elements when sleeping at night.

“When my friend’s father died it was a complete shock. I had thought about helping him before but I never did. Afterwards I thought there must be other people I can help in the Netherlands and in Copenhagen, Denmark, where I was working on an internship.”

The first part of the design process was adapting the hoodie pattern. “I made it bigger and turned it into a jacket using waterproof material and the inner lining from a sleeping bag,” says Timmer.

As well as being a purpose-driven designer it’s clear that he has a fierce entrepreneurial spirit and the will to channel it into benevolent causes.

Although the product was a prototype at this stage Timmer managed to partner with Nomad, a high-end Dutch sleeping bad company known for its hollow fibre lining, which provides extra warmth. Nomad donated off-cut materials and Timmer incorporated these into his design with zippers. This allowed for quick release, giving the wearer freedom to move if they needed to release the bottom half quickly.

Testing: “I sat in a fridge for hours”

The first one was given away with Timmer not really knowing if it would work and it turned out to be a hit. “I had tested it,” he says. “I made sure it was fully waterproof and safe to wear outside in the cold by sitting in a walk-in fridge for hours.”

Next he went to a local shelter, approaching social workers, asking them who he could give the suit to. “They pointed me in the direction of Peter, who was very standoffish at first but when I showed him the suit and told him I made it for him, he opened up and was very thankful and he even offered to take a selfie with me.” 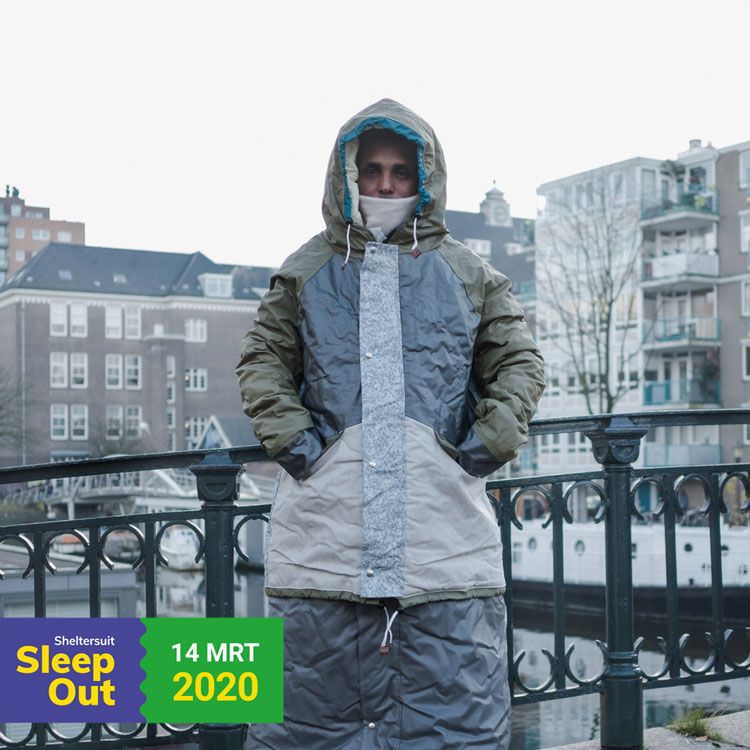 The relationship with Nomad developed with 800 sleeping bags soon being donated. All of them had faults like broken zippers but Timmer just needed the material. As he scaled things up he went to similar companies like TenCate, a specialist in everything from waterproof tent textiles to military grade fabrics. The company agreed to provide large volumes of unwanted waterproof materials, meaning that he now has almost 100 types of patterns and textiles to work with, making every finished item unique.

It was the first of several steps which showed that Sheltersuit could integrate itself into the circular economy, an approach which proved to be critical to its growth.

Having an inkling that there was a huge amount of waste from discarded sleeping bags at music festivals Timmer invited a film crew with him to Lowlands. “That was the first time you saw on Dutch television how bad the waste problem was. It was a huge shock to many people.” Around 1000 sleeping bags were acquired that day and 5000 soon followed as he contacted more festivals and made arrangements with them.

“It’s estimated that we’ll get 20,000 sleeping bags from just one festival this summer,” he adds. He has 8000 sleeping bags piled up ready to be used at the factory in Enschede, a space which was initially provided by the Netherlands government, but now he pays for.

Up until that point Timmer had one design for cold weather climates, which the Sheltersuit business has been built around. This meant turning it into a non-profit foundation targeting homeless people in Europe and North America. Soon though, alongside individuals on the streets, refugee camps in places like Lesbos and Samos in Greece were identified and outreach programmes established there.

Another strand to the business, linking up all of these elements is the Sheltersuit workforce. “Many of them were homeless for a while so they know what it’s like.” Now there are 14 employees on pay roll with a salary, but initially Timmer was paying them €100 on top of their welfare just to make it all work.

“That was a bit blackmarket so we went to a non-profit, told them what we were doing and got some proper backing, so they workers could have a real salary.” Now he has €45,000 (£39,000) going out of the business per month, everyone is paid at least minimum wage and as well as machinists there is also a sales person and someone dealing with finance.

“We have a mix of Dutch citizens and refugees. Our office staff are mostly Dutch, while some internationals and the production staff like our head tailor and all our other tailors are refugees,” he says. All of these refugees and their families are offered Dutch lessons to help them assimilate.

Funding is becoming increasingly important for the business and Timmer has looked at several streams to make it work. The not-for-profit Start Foundation was the first to back Sheltersuit and others soon followed. The Lottery Foundation of the Netherlands has got involved and as momentum has built, donations from companies have come in, while individuals also make a significant contribution. “One woman donates 1000 euros a month. 100 other people do less but still regularly,” Timmer says. The Lottery donation was pivotal as it led to Sheltersuit’s first large campaign in a huge refugee camp in Greece.

The astounding thing about Timmer is that as well as identifying a need for a life-saving product, he designed a solution and then set about turning it into a scaleable business, employing the very people Sheltersuit was designed for before adapting the product design to suit different climates.

Building a “bridge of trust”

Rather than bulldozing in, he worked with stakeholders and organisations as he was going and ended up creating a highly adaptable service.

In the process of doing this, Timmer found that often the people he was helping weren’t always able to be reached by services – social services or outreach charities for instance – but the Sheltersuit provided a communication channel.

Timmer works with social services so they can integrate the Sheltersuit into their outreach programme, helping him with the distribution, and more importantly, making the service available and visible as a point of contact. 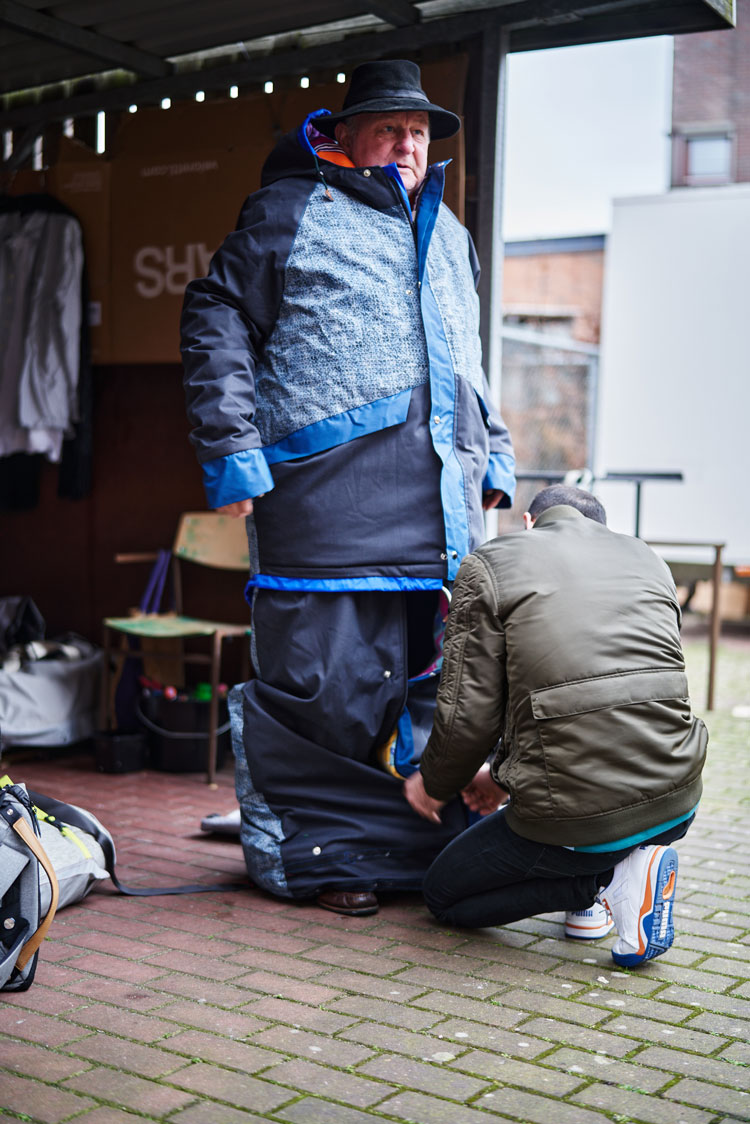 “When you distribute a Sheltersuit you are basically giving that client — homeless person — the freedom to choose where they want to sleep, allowing them to make their own empowered decisions while knowing they will still be warm and protected against the natural elements,” says Timmer.

It is this “bridge of trust” which gives the relationship between social worker and homeless person a different dynamic as “they’re not being forced to sleep in the shelter or take other services,” he adds.

One of these bridges is formed when the homeless people come to shelters to wash their Sheltersuits, which gives social workers an opportunity to check in with them and “continue building a relationship,” Timmer says. “The most important thing to create is trust.”

“I’m not the person to solve” homelessness

While stopping, or solving homelessness is a question for Governments, Sheltersuit provides a lifeline to those who need it in an immediate way and operates in a space where those same governments and agencies have not always been able to reach people.

“I want to keep them warm for as long as they’re forced to sleep outside. I would love to inspire help to solve homelessness, but I’m not the person to solve it,” says Timmer.

Design Week was in Cape Town, South Africa at design conference Design Indaba, where Timmer unveiled the next stage of the project, Shelterbag – a new Sheltersuit product tailored to homeless people in South Africa.

Rather than keeping them warm in extreme cold, this design provides shelter and transforms from a wearable garment to a sleeping chamber with an inbuilt sleeping mat. The whole thing rolls up into a bag with room for further storage.

Again supply chains are being organised, which sees textiles being reused, while local homeless people are being employed and a factory set up in Cape Town.

Design Indaba backed Timmer, helping him produce 250 Shelterbags when he announced them on 26 February. In the days that followed he rode a wave of momentum that saw backers help fund a further 1350 units.

So what’s next? “More designs,” says Timmer. “But first I need to go to more places so I can design products which can adapt to their environment. I know there’s a real need in India for instance. Everybody needs something different.”

Clearly Timmer is not someone lacking ambition so it’s no great surprise he wants Sheltersuit to be “worldwide” in the sense that there is “a factory on each continent” serving “anywhere there are homeless people and refugees who need work”. The surprising part of this story is that Timmer has achieved all of this by the age of 29.

At the time of publishing though Timmer is back in The Netherlands where he says there has been a noticeable spike in homelessness as a result of the coronavirus pandemic. He is trying to reach them though Sheltersuit, help protect them from the elements and forge important connections.

Medopad rebrands as Huma in bid to “humanise healthcare”