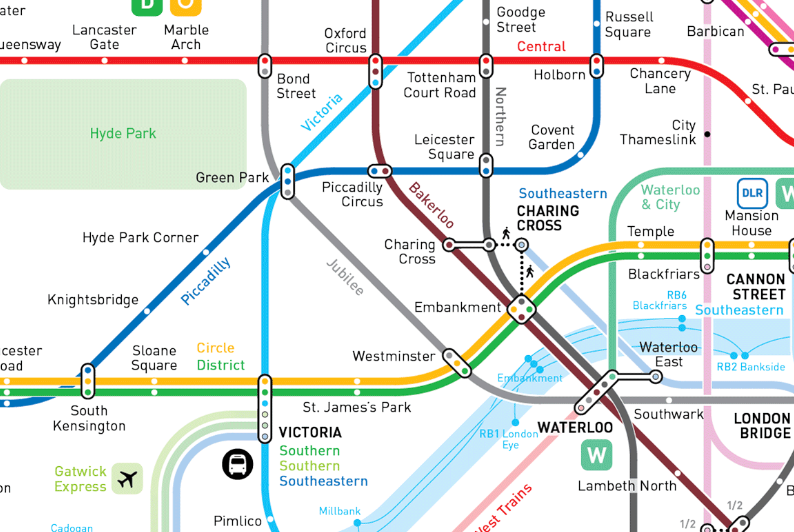 France-based designer Jug Cerovic has unveiled a design proposal for the London Tube map as part of his INAT project, which aims to standardise metro maps around the world.

Cerovic’s Tube map proposals uses bright shades to highlight high-frequency services (such as the London Underground and Docklands Light Railway) and lighter tones to show other services such as Overground and Rail.

It features London parks to help with orientation and, says Cerovic “inside the Circle loop, where the Underground network scale and the walking distances are related, the schematic map is close to geography”. 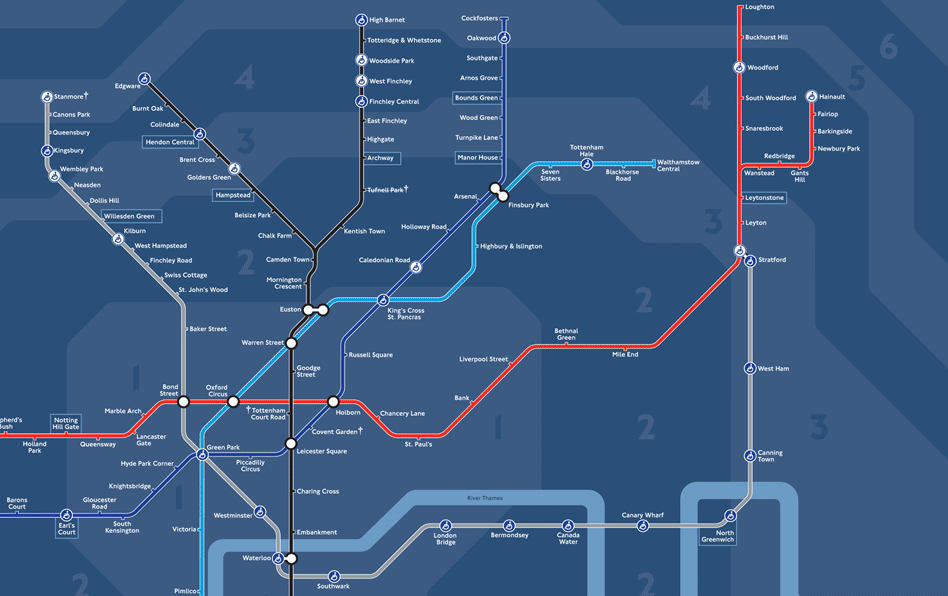 The Night Tube – a plan by Transport for London to introduce a 24-hour service on certain lines – was set to start in September 2015 but has been delayed following strike action.

Although a new date for the Night Tube is yet to be announced, TfL has released a Night Tube Map, which shows the services across different lines that it is planning to run 24 hours.

The Night Tube map uses the standardised Tube map system but is coloured a fittingly nocturnal blue and also features a “night-owl” icon.

You can see the map in full at tfl.gov.uk. 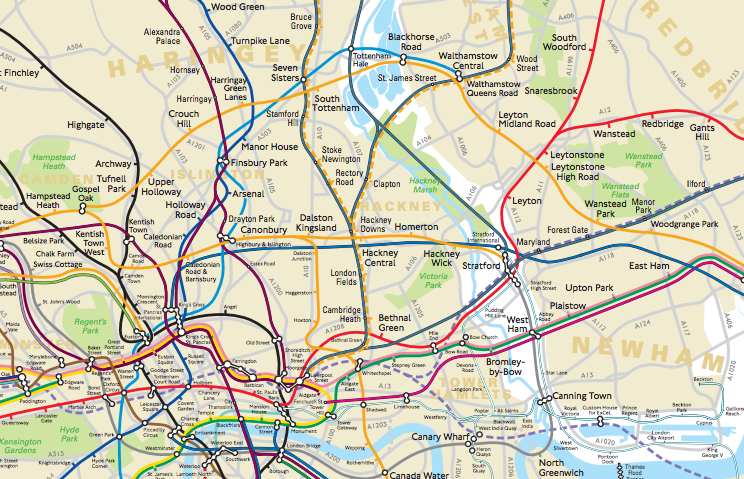 One of the most common proposals for redesigning the Tube map is to create a more geographically accurate map.

When Harry Beck created his Tube map design in 1933, he purposely rejected any form of geographical or distance accuracy. Instead, he stripped the network back to a diagram of coloured criss-crossing lines.

There have been various attempts since then to introduce a geographically accurate map – and earlier this year it was revealed that TfL itself actually holds and updates its own geographic Tube map.

You can see TfL’s geographically accurate Tube map at www.whatdotheyknow.com. 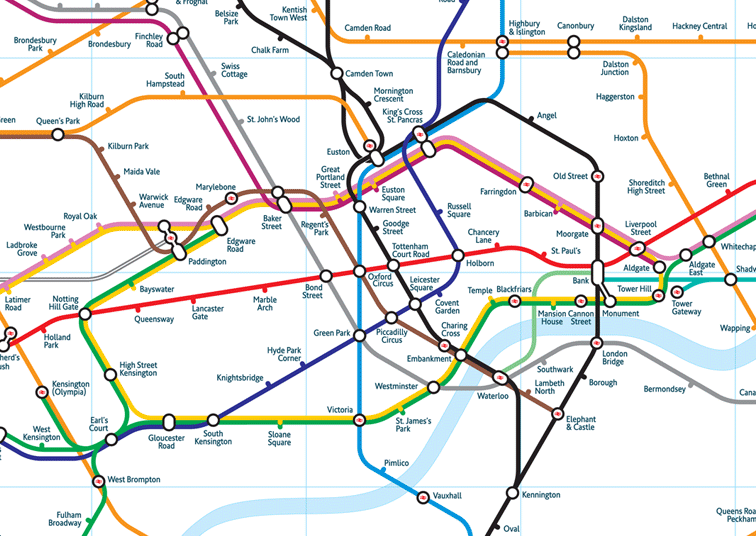 Mark Noad’s 2011 update of the Tube map starts with the idea of creating a more geographically-accurate map.

The map also uses a series of filters, so that a viewer looking at it online can choose to see, for example, fare zones or stations with step-free access.

Noad says: “Harry Beck’s original is one of the greatest designs of the twentieth century but, although the current diagram still follows the same principles, they have not been applied with any great care. As a result, I do not believe Beck would have been happy to put his name to the current version.” 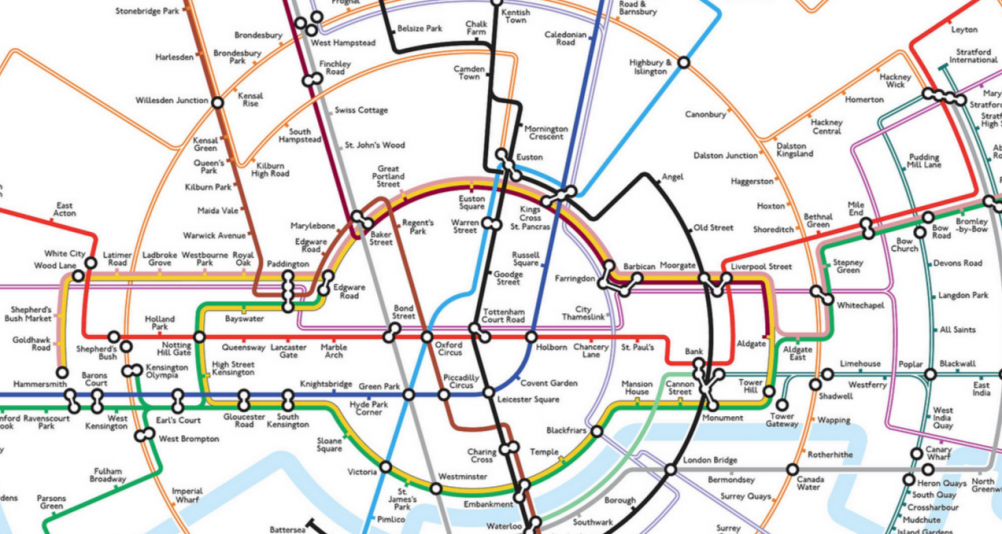 In 2013, Dr Max Roberts proposed a Tube map redesigned based on the concept of concentric circles. Writing on the Going Underground blog he said: “Grounding a map in familiar shapes such as circles can make it easy to comprehend.”

The map starts with the Overground line as a circular shape and aims to fit the other lines into the same system.

Roberts says the concept was “fun to make” but adds: “Overall though, I don’t think I will be sending this one to TfL for comments.”

You can see Roberts’ Circles map proposal at www.flickr.com.

TfL’s current Tube map is based on Harry Beck’s original 1933 design but, as Noad points out, these have changed reasonably significantly in the past decades.

As well as having to add in new lines (such as the Jubilee and Victoria) TfL’s designers have also experimented with different design concepts, including briefly removing the River Thames from the map in 2010.

The current TfL map is now available in several different official versions. As well as the Standard Tube Map there are also maps showing step-free stations, toilets, lines on which you can carry your bicycles and an online real-time disruption map.

See all the official TfL Tube maps at tfl.gov.uk.