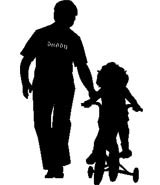 They’re everywhere. The Che Guevara, the FCUK, the Anti-Corporate and the F**k Me. Slogan T-shirts have become an all-season, any-occasion fashion staple. And, to a number of graphic designers, they’re a calling card, a money-spinner when work is hard to come by and a creative outlet between annual reports.

Among countless others, Nobody founder Jaz Ghotora has just collaborated with illustrator Jason Stavrou on a T-shirt range, Hry (Feature, DW 24 July), and Form art director Paul West has launched Doodle, T-shirts based on his phone pad scribbles. And then there’s Daddy.

Daddy T-shirts, the brainchild of graphic designers Nin Bose and Nathan Collins, are taking the form to even greater heights. Originally a one-off sideline because the pair could not afford a corporate brochure, the range has been so successful – David Beckham, the ultimate Daddy, has one and Brad Pitt apparently ‘never takes his off’ – that Bose and Collins are launching a men’s clothing collection, based on their own scruffy wardrobe staples that incorporate Daddy graphics.

The standard Daddy T-shirt features the word in lower-case gothic script. These were joined by swirly Arts-and-Crafts-meets-the-1960s-style sirens, modelled on the likes of Kate Moss and Brigitte Bardot. The menswear collection, unveiled last month and on sale next January, introduces further slogans to T-shirts, shirts and embossed on jackets, including a distressed Winnebago graphic with the words ‘MotÃ¶rhome: Born to Be Mild’.

With its tongue wedged firmly in cheek, Daddy’s timing couldn’t be better. Celebrity dads such as Beckham, Jamie Oliver and Jude Law are making fatherhood hip, and Daddy’s graphics tap into the current vogue for a decorative style and deconstructed typography.

Bose and Collins left Middlesex University nine years ago, where they met on day one of a visual communication design degree, to form Daddy, a two-man graphics group. Forward to 2001, and they decided it was time for some self-promotion. A batch of T-shirts was duly dispatched to potential clients and, in Collins’ words, positive feedback came ‘thick and fast’.

The following summer, they developed a 16-strong range, exhibited at underground fashion trade show TBC, and Harvey Nichols snapped up further designs to stock exclusively. The full collection, from trousers to tailored jackets, has grown from a collaboration with former Fake London people Miles Chin and Betty Arnold.

‘Daddy has the potential to be huge,’ says Collins, the more excitably verbose of the two. ‘Its popularity stems partly from the name. Everyone can relate to it,’ he says. ‘And for us, it’s an outlet for our creativity.’

Collins is now designing non-stop for next year’s spring/ summer collection with a deadline looming, while Bose is taking on more of a ‘salesman’ role. Daddy, says Collins, has forced him to take a different approach to the creative process. When designing a fashion collection, albeit one that is ‘graphics-led’, you need to forecast trends to a much greater degree, he believes.

For example, the menswear range follows a pirate theme, inspired in part by topical films such Pirates of the Caribbean. I suggest next year might be a good time to launch a Greek God collection alongside a slew of planned Troy epics, including Brad Pitt’s, and Collins nods enthusiastically. This fashion design lark’s easy.

Daddy is still a sideline. A few months ago, with the 30-piece men’s collection on the horizon, the pair decided to rename their graphics consultancy Bose Collins, leaving Daddy as the fashion label. It has worked with various clients, including Britannia Row, where Bose Collins is based, Proctor & Gamble, London property agency Greene & Co, Virgin and Exclusive Hotels among others. Daddy will run ‘itself’, though for now is ‘a child needing attention’.

‘It helps that we can say we’re a design consultancy when we’re selling into buyers,’ he says. ‘It gives us more credibility.’ And vice versa. Bose Collins is working with a range of clients, and currently applying its Daddy thinking to an on-line sex shop. ‘Daddy is essentially an off-shoot, something that started small and grew,’ Collins says. ‘And that type of approach can be applied anywhere.’

Bose Collins is now spinning off a raunchy version of Twister, Twisted!, for the on-line retailer, which started life as a simple promotional tool. The pair and the client saw the game’s potential and nurtured it. We could all be playing it by Christmas. And that’s all it takes, says Collins. That and a good idea.

Bonmarché brand dresses up for its youthful market