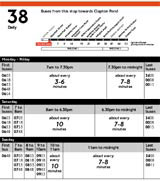 Fitch London is revamping all bus stop timetables across Transport for London’s 7000 bus routes. They are scheduled to be implemented from the end of March.

Bus users accept that if a timetable explains that a certain route has a ten to 15 minute frequency, they do not want any more detailed information. Longer than that and they want a breakdown of various stops en route, he adds.

Around 64 000 bus timetables will be rolled out across London over the next two years. The project is being lead by Fitch associate director Graham Rhodda.

The timetable redesign follows the creation by Fitch of route ‘spider’ maps, which borrow the design of the London Underground map.

The maps are designed to show buses’ routes more clearly and have been rolling out since last summer.