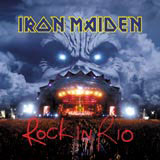 Rock In Rio, heavy metal group Iron Maiden’s latest album, is released on 25 March with a sleeve created by Peacock Design. The live album, recorded last year in the Brazilian capital, features a shot of the stage representing the mouth of the band’s skeletal mascot, Eddie. The album will be available on CD, vinyl and cassette and a limited edition hologram version of the cover will be available as a CD slipcase. The hologram reveals a darkened stage in the sunset. Peacock produced several different ideas to reflect the band playing live, says creative director Stuart Crouch. Rock In Rio is released on EMI Records.