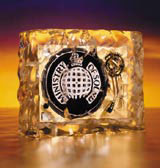 Attik Sydney has created heat-sensitive packaging and a ‘hot’ summer ad campaign for the Australian launch of the Ministry of Sound’s CD, The Annual.

The focal point of the creative work, which includes posters, print advertising, inserts and two 15-second TV commercials, is the CD cover designed by Attik Sydney designer Steve Johnson. Initially black with the Ministry of Sound logo rendered in gold foil, its heat-sensitive ink turns clear when warmed by sunlight to reveal a white background and a number of printed ‘DJ messages’.

The target audience is young Australian clubbers, partying on the beach or elsewhere outdoors. According to Attik Sydney managing director Dave Taylor, imported brands from the US and the UK seldom tailor their products to the Australian market, but Ministry of Sound moved away from ‘simply localising UK ads’ last year with significant results.

Having worked on The Annual last year, Attik Sydney pitched against unknown groups for the 2002 project several months ago.

Johnson tops it off with a colour co-ordinated look