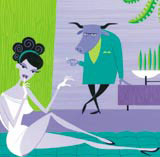 Shag was a commercial artist for the record industry in the 1980s, but started painting after he sold an original artwork that someone saw hanging in a Santa Monica coffee house. Now, save for a few clients such as Time magazine, he rarely touches commercial illustration. What first sparked his love of 1950s and 1960s graphics were those decades’ lavishly produced record covers. His paintings have subsequently become popular and he now exhibits worldwide. His two upcoming shows, in London and Paris, have been instigated by Tim Solnick, partner of cutting-edge London art stationer Roger La Borde, which has published work by Shag since 2000.

Shag’s libertarian subject matter originally appealed because it chimed with the ironic 1990s easy listening craze. ‘People were rediscovering the unapologetic Modernism of the late 1950s and early 1960s – the love of all things modern. They were tired of the political correctness that said drinking was bad,’ he says.

Shag isn’t the most articulate or politically correct spokesman for his work. He says it is a celebration of consumerism, which he considers to be a universal cure for political unrest. ‘I think introducing Kentucky Fried Chicken to the Middle East would end the instability there,’ he says. You hope he’s being facetious, but he’s not. He seems nostalgic, too, for a pre-feminist society, judging by his fetish for nubile nymphets. Yet this is mitigated somewhat by the fact that his male figures – from bespectacled nerds to comically unsexy Minotaurs – are emasculated. His passion for old-school hedonism is endearing, but don’t read too much into it.