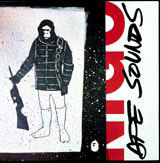 Known to most as the design and art direction brains behind James Lavelle’s Mo’ Wax label, Ben Drury now runs his freelance business from his house in Balham, south west London. Apart from his notable cover creations for Mo’ Wax Recordings such as the recent Ape Sounds by Nigo, founder of the Bathing Ape fashion label, and illustrated by Futura 2000, Drury has begun to diversify in his collaborations. He now employs two assistants and is looking for premises close to home, from where his studio will take its next steps.

One of his latest projects has been to design the identity and sleeve designs for Parlophone’s new House music label, Credence. This he was keen to do for its stark contrast to the very stylised Mo’ Wax work he is best known for. But to diversify, Drury wants to work with bigger labels, too.

“Credence is quite anonymous-looking. It’s a very different brief, which is why I was keen to do it. People come to me all the time looking for special work, but I don’t want to be pigeon-holed as a specialist designer within a specialist field. I don’t want to change my style, but do more art directing rather than just hands-on design,” says Drury. ©

Branson takes one trip too many in his tardis