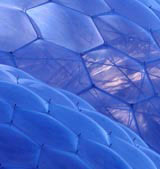 Day Out: Service & Monument will exhibit until 8 October. Postgraduates from the Royal College of Art’s Design Products course, headed up by Ron Arad, were briefed to design street furniture for London’s South Bank.

An exhibition to coincide with the publication of the book Equilibrium by Hugh Pearman, the third monograph from Nicholas Grimshaw & Partners, shows from 15 September until 8 October.

Woody, from 15 September until 31 October, exhibits the work of new furniture designers chosen by Michael Marriott.

The Art of Barbie exhibition moves to Barnsley from 15 September until 29 October. Over 50 artists and fashion designers have contributed, with creations by Alexander McQueen, Jean Paul Gaultier and David Bailey.

Outside Influences: Stephen Pigott is a series of paintings showing from 18-23 September concentrating on spirituality.

Path leads the way for Giant