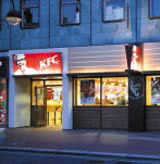 Things are hotting up in the fast food kitchens of Britain. Formica is finished, burgers are being bumped off the menu. In response to tougher legislation and changing consumer tastes, fast food chains have been busy introducing healthy meal options to their menus and revamping their restaurants with design-led innovations.

Not only is McDonald’s selling salads, it has introduced photography to its packaging under the guidance of Boxer Design and revamped the Happy Meal. Meanwhile, KFC has begun a review of the Colonel’s finest with retail specialist Checkland Kindleysides.

But will the customer buy it – both literally and symbolically? As Start Creative managing director Mike Curtis points out, ‘despite the fact that McDonald’s has scrapped its extra large varieties, it’s easy to argue that the brand still suffers from a large helping of consumer cynicism’.

So what can fast food behemoths do to move their brand positioning forward? Curtis says they need to ’embrace change and listen to a new breed of customer’. To do that ‘they must focus on the brand and communicate and present it properly’, he says.

‘Consumers aren’t just interested in the product, though that is important. They are more turned on by the aspirational mindset and credibility of the brand,’ he adds.

Curtis believes it is important to get the ‘brand in the hand’ – encouraging people to show their loyalty to it. Consumers are more likely to advocate smaller brands, where association implies being in-the-know, but he believes it can also be managed by big multinationals, and cites the success of Krispy Kreme donuts.

The brand is associated with a number of celebrities in the US and, despite being relatively unhealthy, is successfully expanding into the UK.

‘Customers want a health-conscious diet, but there will always be the desire for novelty twists and naughtiness,’ says Curtis.

He also believes fast food brands must ’embody variety’. ‘It’s no longer enough to focus on one motivator alone – flexibility is key in appealing to the different needs each customer has at different times of the day,’ he maintains.

Interbrand chief executive Jez Frampton agrees that fast food brands are ‘on the back foot’, but he counsels against diversity and calls for a focus on what he terms ‘the centre of gravity’.

‘These brands are making subtle attempts to change, but until such time as they attend to their centre of gravity, brand [dissonance] will be an on-going issue,’ he says.

He cites Burger King and McDonald’s as an example. ‘The centre of gravity of these brands is burgers and chips, there is no getting around that. They need to target that and refresh the way people see burgers.’

Frampton believes that in updating these brands for the 21st century, ‘the notion of the way they promote and position the product has to change’.

‘The solution isn’t in delivering salad, it’s more about reducing the salt in the chips,’ he asserts.

Frampton also advocates focusing on the ‘fun’ elements of fast food. ‘Brands like McDonald’s are very good at making food fun,’ he says. ‘The solution lies in making that fun healthy, but within the context that people love burgers.’

Freddie Baveystock, strategy and communications director at The Nest, agrees. ‘No-one associates McDonald’s with salads. [The brand] is in danger of alienating its core customers and making them feel bad about burgers,’ he says.

Rather than focus on product extensions that are not a natural fit with the brand, Baveystock agrees with Frampton that the solution lies in ‘creating a healthier burger’, and, he believes, the core offer should also be retained.

‘Burger King should still sell the Whopper but position it as an indulgence, for the “what the hell” times,’ he explains. ‘We all eat ice cream and feel good about it and it’s not a healthy option. That’s because it’s positioned as an indulgence, properly and with conviction.’

Baveystock believes fast food companies must create sub-brands if they are to target effectively, and take market share, in the healthy convenience food sector.

He maintains they are well placed to test new options because of the large number of restaurants they run. It would be ‘relatively simple’, he says, to ‘transform a small number of sites and take one or two elements of the core brand – low cost, comfort food with family – and recombine [them] under different brands’.

‘That would enable them to capitalise on the strengths of the core brand without the inherent tension that exists between fast food and healthy eating,’ he adds.

And, Baveystock believes the core brand would benefit too. ‘A sub-brand would liberate them to have more fun with the core offer and celebrate what it sells more heartily,’ he says.

And while all agree that fast food is not in trouble – the sector continues to grow – there is no doubt that a challenging time lies ahead for these brands.

Boxer managing director David Poole works with McDonald’s on a brief across packaging and point-of-sale material. The Birmingham consultancy helped to relaunch the fast food giant’s packaging globally at the end of last year (DW 18 December 2003).

Poole agrees there is a need to protect the core offer, but he also highlights the size of the challenges that lie ahead for these global brands.

‘These are not niche brands, they are immensely broad – both geographically and in terms of the age of their customers, ‘ he says.

Poole believes that not alienating the core audience while attracting a new one will be a key challenge, and says the solution lies in ‘finding universal truths and universal contact points’.