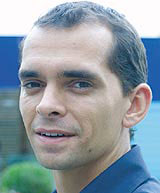 The Carphone Warehouse is to open its flagship Oxford Street store in London later this month, with a format designed by Rodney Fitch & Co.

The 372m2 site, which the company bills as the biggest mobile phone store in Europe, will be the first to trial the Rodney Fitch concept.

The company plans to roll out the concept to a series of new stores throughout the UK and to refurbishments of existing stores, says The Carphone Warehouse visual merchandising manager Paul Lester.

‘Other stores won’t be the same size and scale, but we’ll be taking elements across [the estate],’ he says.

Lester says the store is designed to offer consumers a ‘brand experience’ and simplify what can be a complicated shopping environment.

‘It’s a complicated offer already and new technologies such as 3G and picture messaging will add to that. We want customers to be able to see and feel the technology [in the new store],’ says Lester.

‘The mobile phone industry is changing from a commodity-driven market to a trend-driven one. New technology is aspirational and we want to communicate that and reflect it in the shops,’ he adds.

Rodney Fitch & Co was appointed a year ago to work with The Carphone Warehouse on a variety of projects.