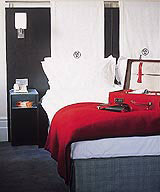 Boutique, or design-led, hotels are still only a small part of the hospitality sector. The launch of MyHotel, a boutique that competes with the successful Malmaison chain, and the planned launch of The Nest, a design-led youth hostel, are the tip of a growing and successful section of the industry.

But can these sector mavericks take on the big hotel chains? Is the focus on design within the sector spreading to the big chains, making patterned carpets and the ubiquitous Corby trouser press a thing of the past for travellers, or will tight margins squeeze design out of the equation?

But he says the tight margins of the hotel business and recent difficult market conditions mean it’s unlikely hotel chains will ever be able to take a fully design-led approach and the design element has to be weighed against cost considerations.

As a result many of TFL’s design considerations are practically based, such as improving the lighting so women business travellers are able to do their make-up easily. There is also a focus on delivering design that offers cost effective maintenance.

‘For example [clients] like the idea of plain carpets, but everyone knows they get dirty quickly. So we include a fleck which has a plain feel, but is easier to keep clean,’ explains Chalker.

Boutique hotels are usually aimed at attracting business guests aged 30 to 40, according to MyHotels director of developments Ian Oram.

But there is also a generation of design conscious travellers who cannot yet afford a room at a boutique hotel, or would rather save their limited budget for other things and don’t want to be stuck in a ‘grotty youth hostel’, says Captive Enterprises director Jonathan Dalton. This is the kind of traveller Captive Enterprises hopes to attract with its designer hostel The Nest, which is planned to open in east London later this year.

Although a bed for the night will only cost £15, the company plans to include a private sleeping pod by Olivia Walduck, lounge areas featuring Arne Jacobsen’s Egg chair, office space with workstations and a New York-style grunge bar in a converted warehouse.

‘The budget is only £500 000 for the refit, and it was very difficult to get it down to that level, so we are relying heavily on modular prefab pods,’ Dalton says.

With both chain hotels and the lower end of the market making inroads with well designed offers, the boutique hotels are being forced to continue reinventing themselves in order to compete.

Some are moving away from adherence to the minimalist look and trying to give people something unexpected, says Conran & Partners architect Robert Malcolm.

‘People are looking to break down pre-conceived ideas about what hotels should be like. For example, you might expect MyHotel Chelsea to be modern and chic, but it has modelled itself on a version of a country house,’ he says.

Jestico & Whiles senior designer Michelle Le Masurier says the consultancy takes inspiration from the location and the architecture of buildings to keep each hotel looking fresh when designing interiors for Malmaison.

The consutancy also includes some rooms that are radically different from the others. Le Masurier cites corner rooms designed for Malmasion Edinburgh, as an example.

‘[The rooms] have been given more dramatic colours, rich red and cream, and the upholstery and soft furnishings are a bit more theatrical,’ she says.

It seems design is assuming a more important role across the hospitality sector. But Melvin Gold, who heads up the hotel arm of accountants and consultants PKF, is sceptical the industry can truly change its spots. He thinks there will be a step change, rather than a dynamic one.

And there is nothing that separates the boutiques from the big chains more than their attitude to the bottom line, which is summed up by TFL International chairman Bradley Cox.

‘You can have a horribly designed hotel, but if it makes money for the owner, he is happy,’ Cox says.

According to Oram this contrasts with the attitude of the owners of boutiques who all have a personal interest in design and the design brief.

And perhaps this is the nub of the issue. Keeping costs to a minimum is an issue for hotels across the spectrum of the industry, but the real challenge designers face is moving a design ethos up the agenda at the larger hotel groups.