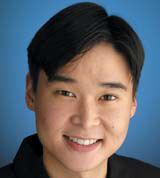 Although the phenomenal success of Google is mostly down to its functionality, its inspired and eclectic branding plays a part too. John Stones meets the man behind the doodles.

Google is one of the few brands to transcend the dotcom bubble to true ubiquity. With an awesome stock market valuation, it, like Hoover, has the rare accolade of becoming a verb.

Behind this behemoth, there is a single ‘master doodler’, the quietly-spoken and self- effacing 27-year-old Dennis Hwang (pictured), who, for the past five years, has been responsible for the ‘doodles’ on its homepage logo, Google’s face to the millions who use the search engine every day. It’s him you can thank for the various delightful and whimsical variations, which celebrate festivals and commemorate important dates every now and then – basically, whenever someone within the company has a bright idea about when to do it. The first doodle originates from the early days when Google founders Larry Page and Sergey Brin decided to go to the Burning Man Festival in Nevada, and put up a burning logo to show that they had gone and left things un-manned.

When Hwang joined Google, it was a much smaller company than it is now. He was just the kid on placement from Stanford University in California, where he was studying art and computer science. ‘Larry and Sergey asked me if I wanted to stay,’ Hwang

recalls, imbuing his retelling with a touch of dotcom mythology, which brings with it a whiff of a different age. It’s all a bit like Page and Brin starting Google in a dorm room (also at Stanford) and then progressing from computers in garages to where they are now. Naturally, Hwang said yes, returning to finish his final year of studies, while continuing to work full-time. ‘Something I wouldn’t recommend to anyone,’ he says.

Alongside his position as master doodler, Hwang admits to a ‘menial day job’ as webmaster, which takes up some 80 per cent of his time. But, when the call comes, he often has to have lightening reflexes – a new graphic can sometimes be on-line within two hours. On average, Google plays about with its home page about once a week, preferring to keep the tactic as a surprise rather than an expectation. But, as it acknowledges local festivals from around the world, this is becoming more frequent. And, like Apple Computer’s ‘Made in California’ ruse, it combats the perception that the company is too Uncle Sam.

Hwang is keen to dispel the suggestion that the doodles are a marketing gimmick, but he happily explains that the doodles co-exist subliminally with the act of searching. The subjects chosen, such as festivals or dates from the lives of artists and scientists, work at convincing Internet users that Google acknowledges their culture, or has the attributes of the great and the famous.

Some of the transformations of the home page logo are quite drastic, but Hwang denies that this poses a risk to Google’s identity. ‘We’re not concerned, even though the prevailing thought in the branding world is that [identity and logo] has to be fixed, and that it is corporate suicide to alter or play with it. A lot of people within the company also objected at the time,’ he says. But, of course, it has proven to be a very successful tactic for the company, and Hwang feels vindicated by the amount of branding that now takes a similarly flexible approach.

Google’s supple, but overwhelming appreciation of branding is apparent from the Googleplex – glam new offices in London’s Victoria, with interior design (by DEGW) that none-too-subtly reinforces the Google message, through an eclectic and seemingly random assemblage of furniture, that is then reunited by the primary colours of its logo. Hwang was in town to present a prize to 11-year-old London schoolgirl Lisa Wainaina, whose pretty design won its schools’ art competition and was adopted as Google’s home page in the UK for one day last month.

The occasional guest appearance is allowed – Hwang invited his art tutor once – but generally the work is his own. Hwang’s personal favourites are the home page variations given over to artists, especially one in which the Google logo is floated in the style of Monet’s water lilies. But, perhaps the greatest creativity is on the branding rather than the artistic front.