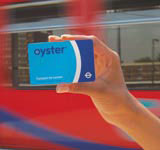 Transport for London is considering implementing a separate identity for Oyster smart card as it evolves into an ‘e-purse’ next year.

TfL will most likely select a consultancy from its design roster to create the identity, while branding collateral will be developed by the organisation’s advertising agency.

‘The logo would act as an indicator of the facility, but at the moment we are still looking at developing the technology. Nothing has properly been designed yet. In many ways, creating the logo is the easiest of tasks, the bigger challenge is making the system work,’ says Innes Ferguson, head of design at TfL.

The Oyster smart card – which is already used by 2.5m commuters – will allow individuals to pay for small purchases at newsagents, pubs and cafés.

The service is expected to launch at the end of next year and will operate like a pre-paid top-up card, where funds are subtracted when a chip is held over a reading device in doors, turnstiles and countertops. The chip will not necessarily need to be embedded in a wallet format – like current Oyster smart cards – but could potentially be stored in electronic devices such as mobile phones, MP3 players or a watch.

Currently, a consortium of partners to support the scheme is still being negotiated. It has been reported that several high street banks and credit card companies, including Alliance & Leicester, Barclays, HSBC, Visa and American Express, have expressed interest, as have businesses such as Marks & Spencer, Ericsson and Starbucks.

The Oyster card was developed by Transys and launched in 2003. It is currently used on buses, the Tube, Docklands Light Railway, trams and trains in London.

Rise of the machines