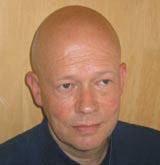 Backstage at the London Coliseum, Ultz is putting the finishing touches to his designs for The Bitter Tears of Petra Von Kant, an operatic version of Rainer Werner Fassbinder’s classic 1974 film (and before that, a play) about the romantic entanglements of a group of lesbian fashionistas in 1970s Munich.

Shaven-headed and inescapably English, Ultz is a vision in brown – shirt, trousers, sandals and bag. Style from the 1970s has clearly taken hold. He leads me through a backstage warren to the 20m stage of the Coliseum. There the fixed set reveals a fashionable Munich apartment, furnished in a style befitting the mid-1970s. The colours are predominantly orange, yellow and brown. For anyone who personally experienced the whole 1970s design experience, it is horribly convincing.

Ultz and director Richard Jones considered updating the action to the present day. ‘We thought it might be amusing to satirise our contemporaries in the fashion world,’ he says. But they settled for the 1970s, partly because there were rich pickings from a design perspective and partly because metropolitan lesbian culture has changed significantly in 30 years.

‘We had to find a stage equivalent for the oppressiveness and claustrophobia of the film,’ Ultz says, the rehearsal progressing vigorously in the background. ‘Petra is the sort of person who thinks “I’m a designer, I do things with style,” so it makes perfect sense for her to have a totally orange bathroom, including towels, toilet and toilet paper – every little detail. I don’t have any interest in good or bad taste when I’m working. I work according to the character of the piece,’ he adds.

One design detail he points out – the bedroom wallpaper – has a curious provenance. Ultz and Jones were on a field trip in Lithuania when Jones emerged from a restaurant toilet in a state of excitement. ‘He said to me, “You must go and look at the tiles in the loo, they’re perfect for Petra’s bedroom,” so we had the pattern copied and hand painted as wallpaper.’

Ultz is one of those figures known by a single moniker (which came to him in a dream), and only his mother uses his Christian name – David. He’s something of a theatrical polymath, having started out as an actor and drama teacher, and frequently turning his hand to directing, as well as designing. ‘I think like a director, and I know a lot of directors who think like designers. The important thing is, whatever power structure you agree to in the first place, you have to stick to it.’

Ultz appears to dive effortlessly between opera and hip hop, classics and cutting edge drama. Two years ago he devised, designed and directed Da Boyz, a hip hop version of the comedy The Boys From Syracuse (based on Shakespeare’s The Comedy of Errors), and he will return to Stratford East early next year to work on another hip hop show, with Kenric Sandy of Boy Blue. He also worked with Ian Rickson, artistic director of the Royal Court, on Roy Williams’ hard-hitting play Fallout last year, creating an urban hellhole slap bang in the middle of the auditorium.

‘I get a real buzz from understanding other cultures and other languages. Earlier this year I worked on The Gods Are Not to Blame at the Arcola, so I had to get to grips with 15th century Nigerian costume and culture. It was a steep learning curve and I enjoyed every minute of it,’ he says.

He also worked on the West End adaptation of the Hollywood movie When Harry Met Sally. The difficulty of evoking modern Manhattan in the ultra-ornate Theatre Royal Haymarket was solved by paring everything down to muted off-white minimalism. ‘The film was just a series of meetings between two people, so we had to reduce the film’s 80-odd scenes to 20. I think it worked OK,’ he says.

Like all the best creatives, Ultz is rarely satisfied with a job, but he says that when everything comes together – design, direction and performance – there is no better feeling. Soon enough audiences will see if The Bitter Tears successfully makes the leap from celluloid to the operatic stage.

Going up a gear to London pace