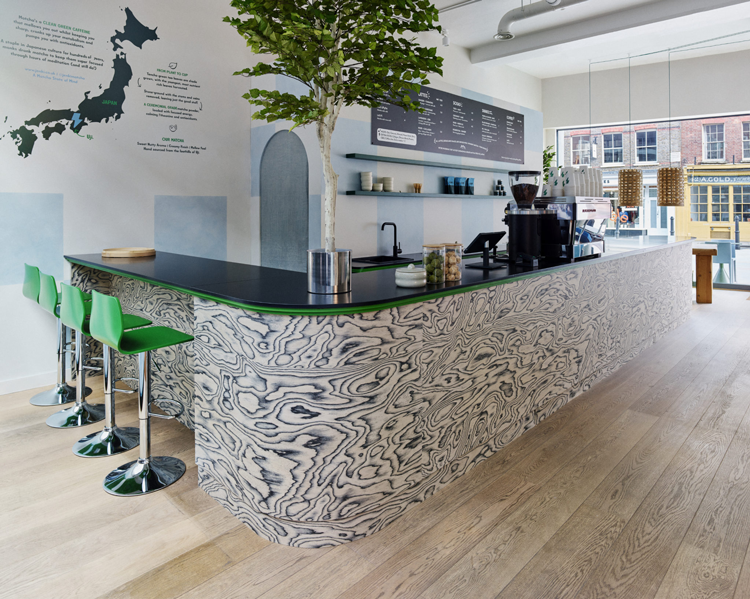 New York native Ruby Kean has designed a space for Jenki, one of London’s first-ever dedicated matcha bars. The café, situated in the capital’s Spitalfields market, was an exercise in blending “ancient and modern sensibilities” she says, achieved through different layering techniques.

Seating from Japan sits alongside bespoke geometric shelving; meanwhile a bold centrepiece bar designed by wood surface designers Alpi Wood is combined with a colour palette of rich greens and bright blues. While not overtly nature inspired, Kean says this is a nod to the “environmental undertones that the matcha tea plant stands for”.

The overall look is intended to be an extension of Jenki’s existing branding, Kean says, which uses the same blue and green colour palette. Combined together with the traditional Japanese seating, the hope is that Jenki can provide a communal space for patrons to enjoy the drink.

Khai Khai restaurant, by Run for the Hills 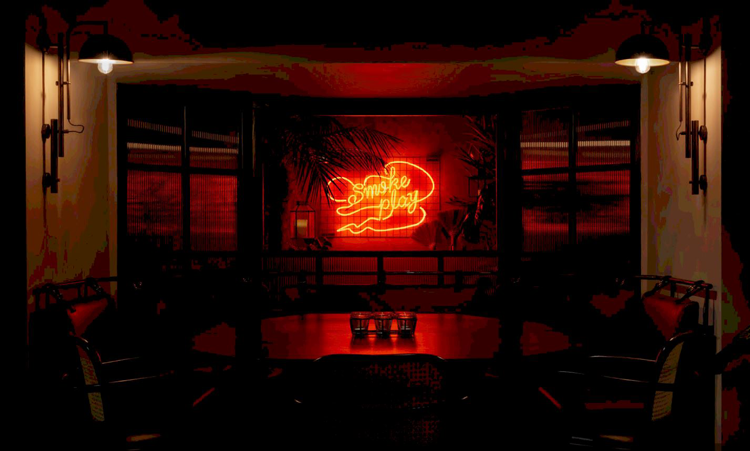 By day, Run for the Hills describes its latest project, Newcastle restaurant Khai Khai, as a “dramatically fresh and airy space”. At night, the studio says it transforms into a “warm, dark and moody” place, reminiscent of “fireside gatherings”. Lighting is a key part of the experience in the Grade II listed building – the team worked with Elektra Lighting to develop a scheme that could replicate both freshness and warmth at different points of the day.

Set over two floors, the lower ground Parlour Room is where the restaurant expects to entertain private functions and dinner guests. The guest experience here is even moodier – a private bar for the area is wrapped in dark textured timber and dressed in vintage objects and Indian antiques. Candlelight is used alongside a bespoke neon sign to achieve a reddish glow to the space.

Planting is used throughout to create atmosphere and draw the eye. “Abundant kerbside planting” at the entrance of the restaurant aims to achieve a “lush” welcome. Meanwhile in the lower ground, palms are used to create different heights and highlight the restaurant’s unique underground passageway. 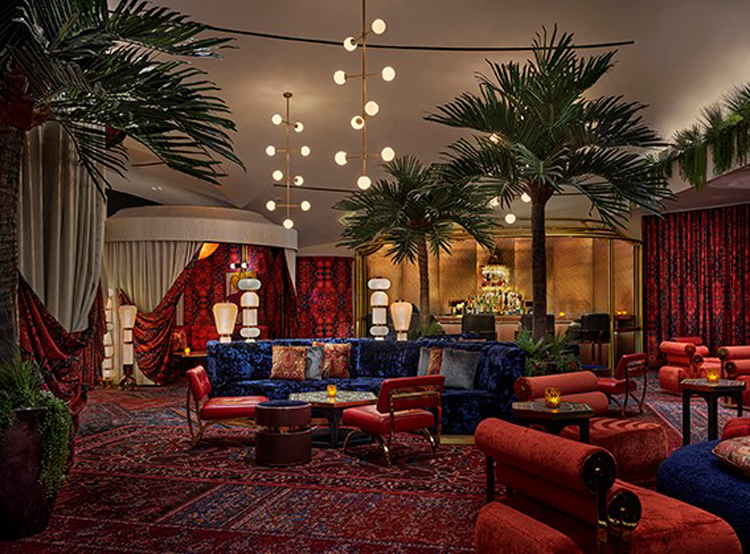 Situated in what was once Las Vegas’ Hard Rock Hotel, the Virgin Hotel sits a few miles away from the city’s iconic strip. This was a major inspiration point for Rockwell Group in the design of the new space, with the studio opting to accentuate the hotel’s connection to the Nevada deserts rather than the usual Vegas hubbub. The end result is something that “blurs the lines between indoors and out” the studio says, with the desert landscape informing much of the design work.

Throughout the interiors, elements have been added as a nod to the hotel’s surrounds. The red carpet used in the casino area mimics the curving tracks of sand dunes. Coloured glass used in the bar area is designed to look like rammed earth often found in ancient desert building techniques.

The Shag Room is one of the highlights of the project. The designers describe the space as a “casual yet sumptuous” bar, accessed via a speakeasy-style phonebooth entrance. Soft seating and banquettes have been introduced throughout, including in a sunken “conversation pit”. Towering indoor trees add contrasting height, while swooping Persian carpets add texture and privacy. 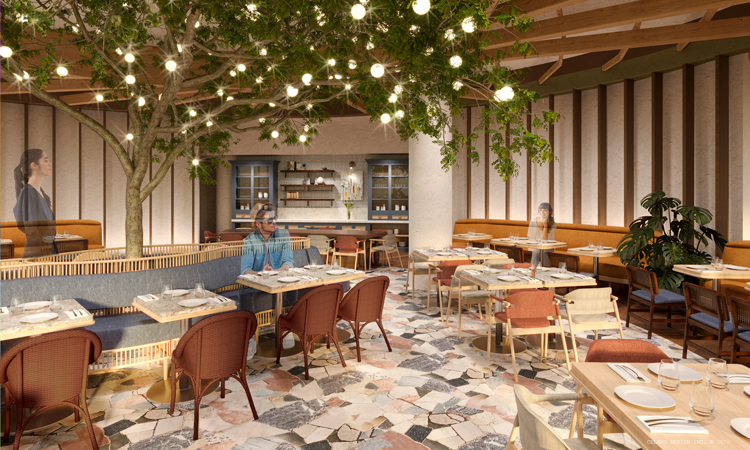 Wanting to pay homage to the rich agricultural history of the state, Celano Design Studio has focused on natural elements for the interiors of Carcara. Located within the Sheraton Phoenix Downtown Hotel – the largest in the state – the design studio says the visitor experience will be “lush with greenery”, as it looks to cotton fields and citrus groves for inspiration.

The space is 7,000 square foot, and offers a central bar and indoor lounge, as well as a main and private dining areas. Because the restaurant will be open for breakfast, lunch, dinner and drinks, the studio says the space needed to offer many things to many people. The focal point of the main are is a 14-foot-tall chestnut oak tree, which acts as an indoor canopy under which guests are seated.

“Honest” materials have been used throughout, Celano says, including wood, woven installations and cotton fabrics. The result is an “approachable yet elegant space” which has the atmosphere of “a secret garden or patio”, the studio adds. 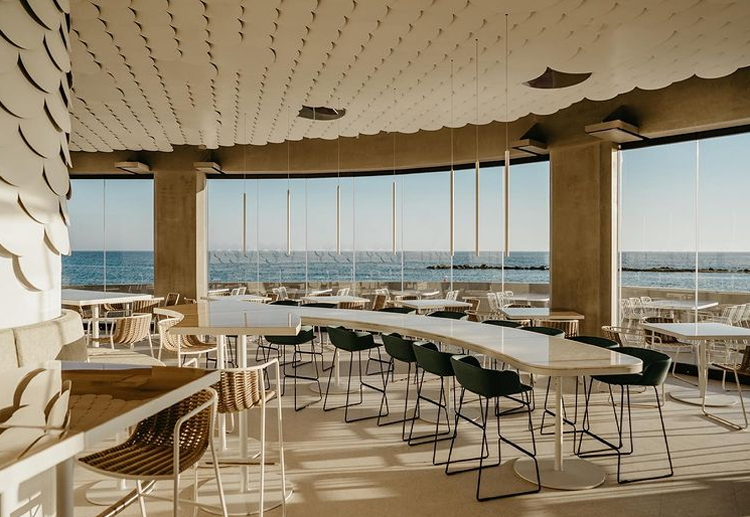 Set on the idyllic Sodap beach in Paphos, Cyprus, interior architects at Baranowitz + Kronenberg (B+K) say the studio’s recent Antasia Beach Club project was born of two premises: nature’s beauty and simple pleasures. The studio says the restaurant aims to serve as a backdrop the views of the beach and Mediterranean sea, which sit just beyond its walls.

The indoor seating arrangement has been “carefully considered” according to the studio, to make the most of the sea view. The result is an amphitheatre-like space, which descends from east to west.

The most eye-catching element of the space is the scalloped white scales which adorn the restaurant walls – a nod to the sea life close by. B+K says the tiles are a “playful interpretation of natural geometry”. These are complimented with a white terrazzo floor, which the studio says echoes the sea foam hitting the shore.