Like most creative sectors, the design industry is mostly made up of those from affluent households or backgrounds. This is down to all sorts of reasons – the competitiveness of the sector, the fact that creative subjects have been neglected in state education in recent years, the common requirement for graduates to do unpaid internships, which are often based in London. All this means the industry favours those with higher-level qualifications and who are financially comfortable or wealthy.

According to the Design Council’s recent Design Economy report, 57% of those in the design workforce hold a university degree, compared to 34% of the UK workforce on a whole. In terms of ethnic diversity, only 12% of all design managers and business owners are from BAME (black, Asian and minority ethnic) groups.

What about those who don’t go to university?

For many design studios, recruitment teams and creative directors will be looking for those who have a university degree or diploma equivalent when hiring new staff. While perhaps not essential in ensuring someone has the right skills for the job, like in many other professions, it will often be a compulsory prerequisite. But what about those people who cannot afford university, or whose natural path has not led them there?

D&AD Shift is one scheme designed specifically for those who do not have BA (bachelor) degrees, to help give them a leg up in the industry.

Organised by Design and Art Direction (D&AD), best known for its pencil award scheme and student award equivalent New Blood, Shift is a four-month, free programme that aims to give budding designers a portfolio of work to help them land their first job.

For those 18 and over without a degree

The programme, which has been running since 2016, takes place in evenings allowing people to do a day-job if necessary, with a few full-day workshops at weekends. Sessions take place at design studios across London, as well as the D&AD headquarters in East London.

The only criteria for applying are that students are over 18, do not have a university degree of any sort and are able to get to sessions in London – alongside demonstrating that they have a “creative spark”. Applicants must submit three pieces of creative work, which could be anything, including a piece of graphic design, a campaign concept, a piece of fine art, a video, photography, lyrics or a story.

Following applications, 15-20 students are chosen to take part in Shift. They then spend four months tackling at least three briefs, giving them completed project work to show at the end of it.

During their time on the course, students also have a mentor from the design industry, who can offer advice and help guide their creative processes.

According to Hilary Chittenden, senior foundation manager at D&AD, the aims of Shift are two-fold; to offer an alternative route into design for those who have not been given the opportunity, and to encourage studios to employ a more varied mix of people, with a look to build a future industry filled with diverse viewpoints.

“We’ve been running our student award New Blood for almost 40 years, and were aware that rising tuition fees and the ever-increasing costs of living in our major cities means that many people are not able to access traditional routes into the creative industries,” she says.

“At the same time, we were being told by people in the industry that they were desperate for ‘different’ creative thinkers – those who have had difference experiences, different bodies of work and different reference points.”

“Not being accredited gives us freedom”

There is no degree or diploma given at the end of the course, which is an active decision made by Chittenden to keep the programme free from academic constraints.

“Not being accredited means we can keep the content and structure agile, reacting and responding to changes in the industry, and aren’t restricted by academic structures,” she says.

Part of the challenge is attracting a diverse range of people to the programme – the programme is by no means limited to young people says Chittenden, and the initiative is being promoted across London to attract those from different ethnic and social backgrounds.

This includes partnering with employment agency Create Jobs, which promotes Shift to schools, colleges and outreach charities, as well as Shift’s own marketing campaign, which has been designed by those on last year’s Shift programme and has been promoted across London in print and digital.

How to provide opportunities outside of London

The programme is also looking to expand. The scheme was run in New York last year for the first time, with plans to extend it to other cities across the world.

But as far as the UK goes, it is currently only running in London, which means that it is mostly only available to those who have the means to travel to and stay in the capital.

Some places on the course have been offered to attendees from outside of London in previous years, such as from Ireland, Hull and Birmingham, with travel and accommodation support provided. But at only 20 places available per year, while schemes like Shift are helping to diversify the design workforce, it only goes a small way in providing opportunities.

“Shift is still in its infancy,” says Chittenden. “We hope to expand it to other cities, in the UK and globally, but we need industry support and funding to make this happen.” 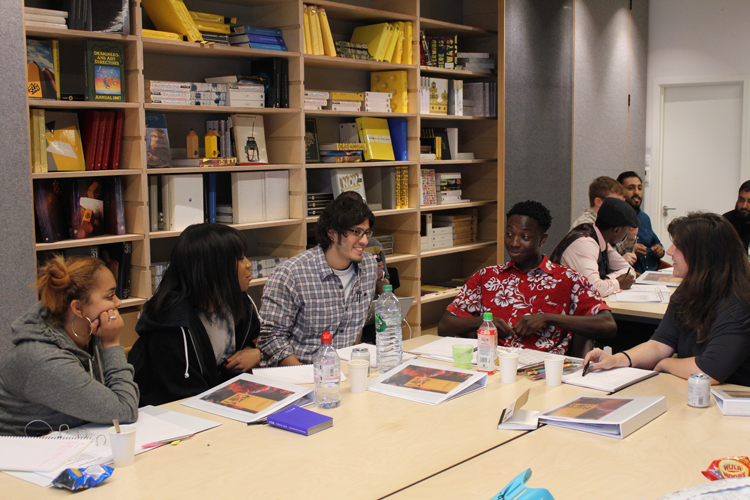 Creating more schemes like this all over the UK is an obvious first step, but there are also ways that those already working in design studios across the nation can help, says Chittenden.

“Advertise your jobs and pay your interns”

“Make sure you’re advertising jobs and internships, not just going to the university you graduated from,” she says. “You can also use one of many job platforms aimed specifically at underrepresented groups such as SocialFixt.

“It’s also important to get into your local secondary school or further education college and tell them about your job – what you do every day, what skills you use, and why you love it. You should support schemes like Shift, and get involved to teach, mentor, and ultimately hire the creatives coming through them. And it sounds obvious, but make sure you’re paying your interns – London living wage.”

She adds that it’s not just seeking diverse employees that is crucial, but also considering the culture of your company and whether it is welcoming to those from different backgrounds.

“Challenge the norms and assumptions in your workplace,” she says. “For example, will everyone be comfortable with that Friday drinks trolley?”

The majority of last year’s students now in a job

As far as Shift goes, despite not equipping people with a university degree, 84% of those on the scheme last year have gone into a paid creative job within a year. While still small-scale with a maximum of 20 students per year, the relative success of the scheme suggests programmes like this could shake up the expectations of employers, and offer alternative routes into design.

“While Shifters don’t get letters after their name or an accredited qualification, they will get a portfolio of work, a one-to-one mentor and a tonne of training that will hopefully land them a paid placement or a route into paid employment at the end of it,” says Chittenden. “It feels like we’re doing something right.”

Applications for this year’s Shift programme are open until 1 August, for anyone aged 18 and over who does not hold a university degree. The four-month programme starts in September and is free. For details on how to apply, head here.