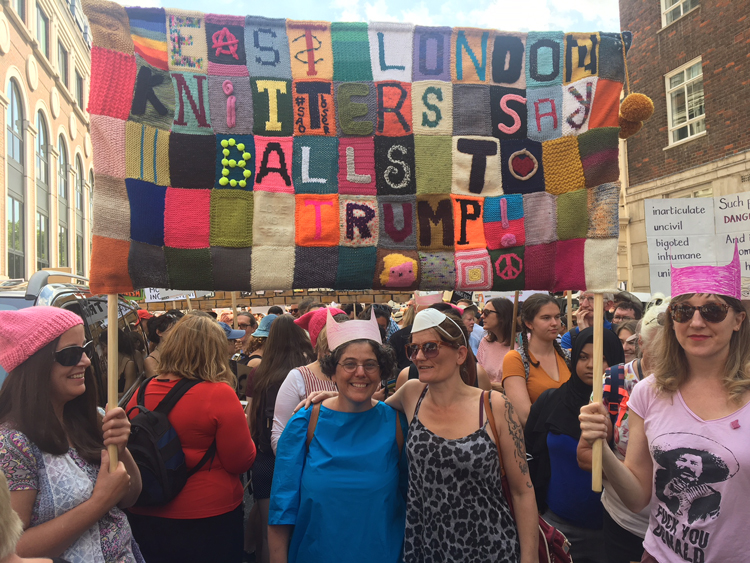 I’m protesting today to say that it’s not okay. It’s not okay to lock children in cages, to repost videos from Britain First, to spread sexism and hatred, to build walls – so much of it is not okay. There are a lot of people out here who want their voices to be heard in saying that.

The banner came out of an idea at knit night – an event I hold once a month in my shop in Hackney, East London, where we bring together knitters to hang out. We talked about how we wanted to have a banner, worked out what it would say, and decided on ‘East London knitters say balls to Trump’.

Then we made a sketch to work out how big each letter needed to be. We posted the sketch online on our Facebook page, and invited anyone out there to contribute. Over the next three weeks, rectangles came in to us from all around the world, and we kept people informed on the progress of the project through #sayballstotrump. We received a mixture of knitted, crocheted, hand-dyed, wool and cotton rectangles – everyone knew they were contributing to the slogan.

The Pussy Hat project was a massive inspiration. That was a really galvanising force for knitting, and we were ready to be mobilised anyway! There’s a total activist ethic going on among knitters at the moment.

There are banners all around us that people have created themselves. The squares came from all over the world, from people who speak different languages – our craft is our common language. Knitting is a universal form of free expression.” 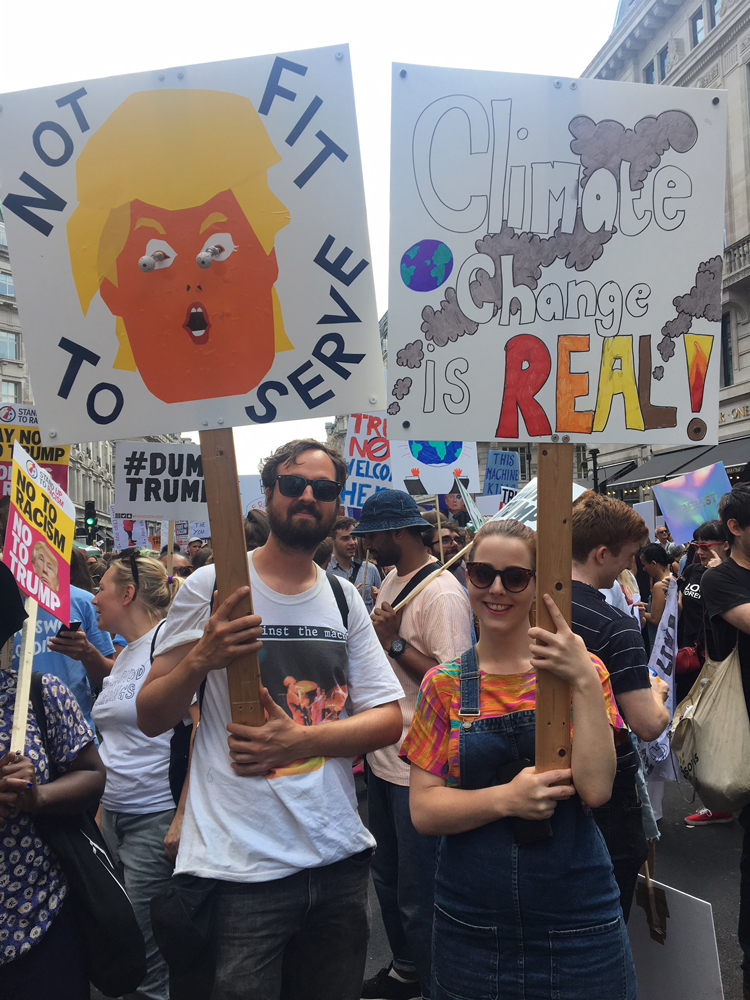 “I’ve never really been on a protest before and I felt like the time had come. The thing that really made me come down was the US embassy move to Jerusalem. I wanted to do something, and by making my own placard, I thought I’d make my point and voice clearer.

I work in a creative studio so I just used what we had lying around at work. We’ve got loads of vinyl, so I went for bright orange, which was an obvious choice really. It’s just crudely cut out and stuck on. We had a few Christmas baubles at work too, so I painted those up and turned them into googly eyes – because he’s a bit unhinged, and it’s quite eye-catching. It’s just something bright and bold for the ‘carnival of resistance’. I went for the slogan as, quite simply, I don’t think he’s fit to serve.”

“My placard is about climate change because Trump has famously said climate change is a ‘hoax’, so I’m here to say that it’s not. He’s turned a blind eye to climate change but it’s becoming a bigger and more important thing which all other countries are getting involved in. People need to stand up and pay attention that it needs to be addressed.

For me, this is all about coming together in creativity to say something loud to guide the dialogue Trump has today with Theresa May and hope that he pays attention to some of these messages. I just used coloured sharpies on vinyl – I’ve gone a bit old school with this one.” 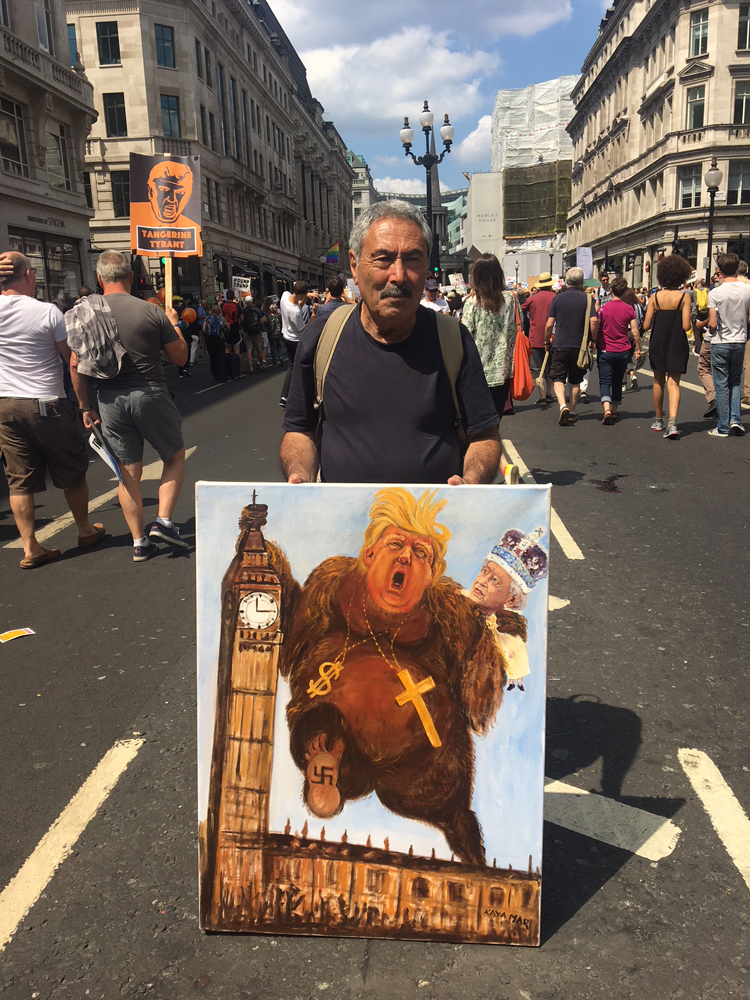 “This ‘great’ man is visiting many countries, and I feel he has hijacked Government, internal and external politics, and now her Majesty the Queen. He’s making a lot of mess and we must clear up the wreckage.

I’ve used oil paints to depict Trump as King Kong, as he hijacks the Queen and tries to wreck parliament. It’s all a metaphor about how he is trying to interfere in parliamentary systems and internal politics.

I’m a political painter nationally and internationally, for newspapers and television. I always do my own thing, because my concepts are harsh, not goodie-goodie like the posters they give out at protests. I go right to the throat, and depict politicians as who they are. First you must make people smile, then they will think. That’s what you try to achieve to get your point across and show who someone really is.” 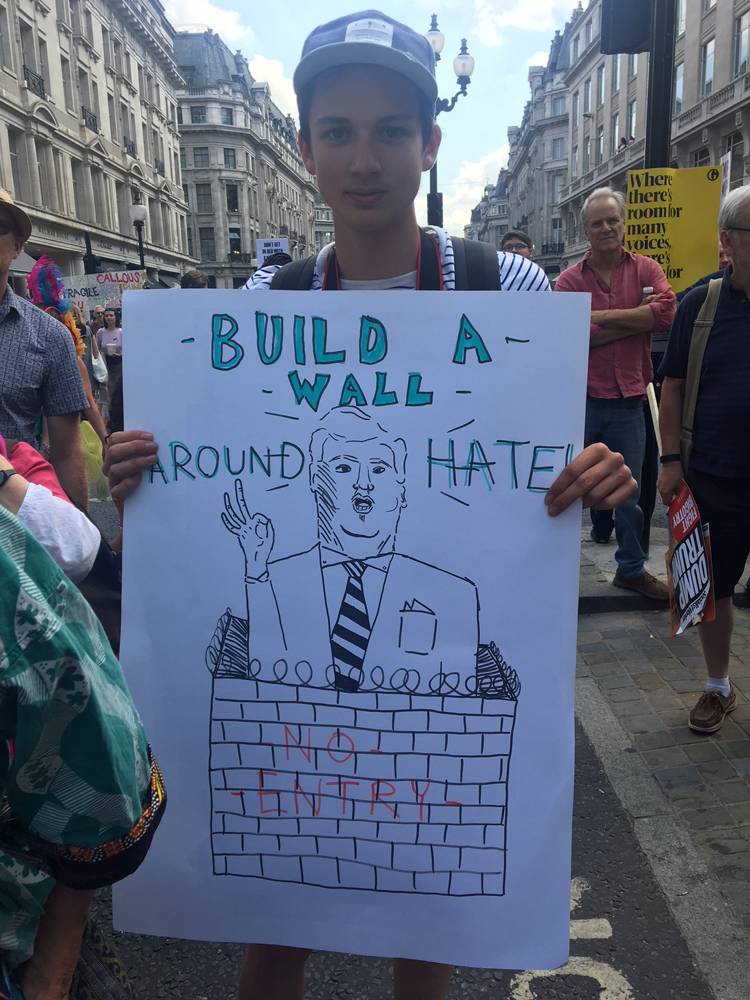 “I’m here because I want to fight racism and fight for equality. There’s a lot of anger that [Trump] thinks he’s welcome in our country when the public hasn’t said that he is. I love being creative, I’m studying art, so I wanted to show my passion for the subject through my own work. The concept is quite straightforward – he’s proposed to build a wall to shut off the US border to Mexico, so I’m saying we should build a wall around Trump. I like illustration, and I think a caricature-style was a good way of showing it because he’s quite a comical character. I just used pen, paper and cardboard.” 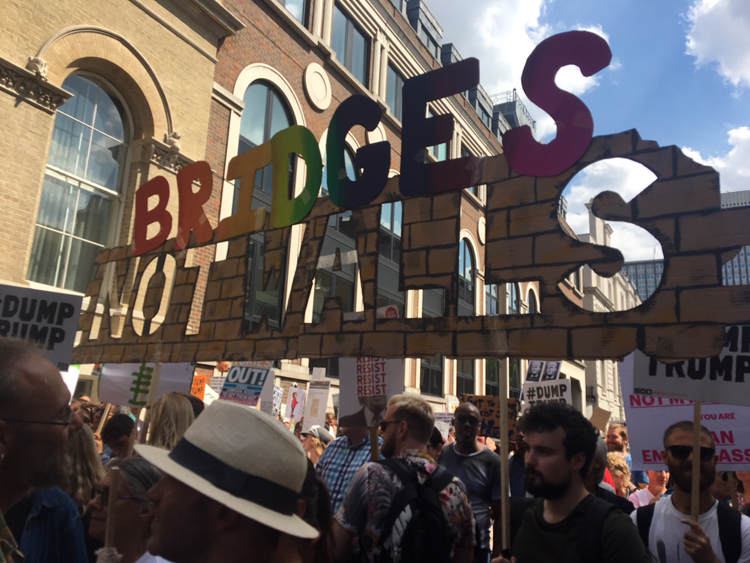 “I came along today to make it clear that Trump’s not welcome and to stand in solidarity with oppressed people around the world who are affected by his policies.

My placard is made of a large cardboard box for a bicycle, which I cut into pieces, then used a long ruler to draw lots of lines to create the pattern of brickwork. I then cut out the letters for the bottom ‘Not Walls’ bit and used a few different household paints to paint in-between the brick lines, before gluing it all onto a wooden frame.

The ‘Bridges’ lettering above is cut out of cardboard boxes and painted with household paint too, which I blended together to make a rainbow colour spectrum from one side to the other. You do this by putting one brush with paint on the area, add another colour, then mix them together with the brush. I used tape to bind it all together. It all took me about a day.

I work in the creative industries and have been making things my whole life, since I was eight years old. There’s a lot of negativity in today and I wanted to bring a more positive message about the kind of world I’d like to see rather than just shouting at Trump. It’s all very well telling him to ‘eff off, but I wanted to say, here’s what you should do instead – build bridges instead of dividing people.”

See below for a selection of some other inventive, poignant, witty and downright rude acts of protest from the march. 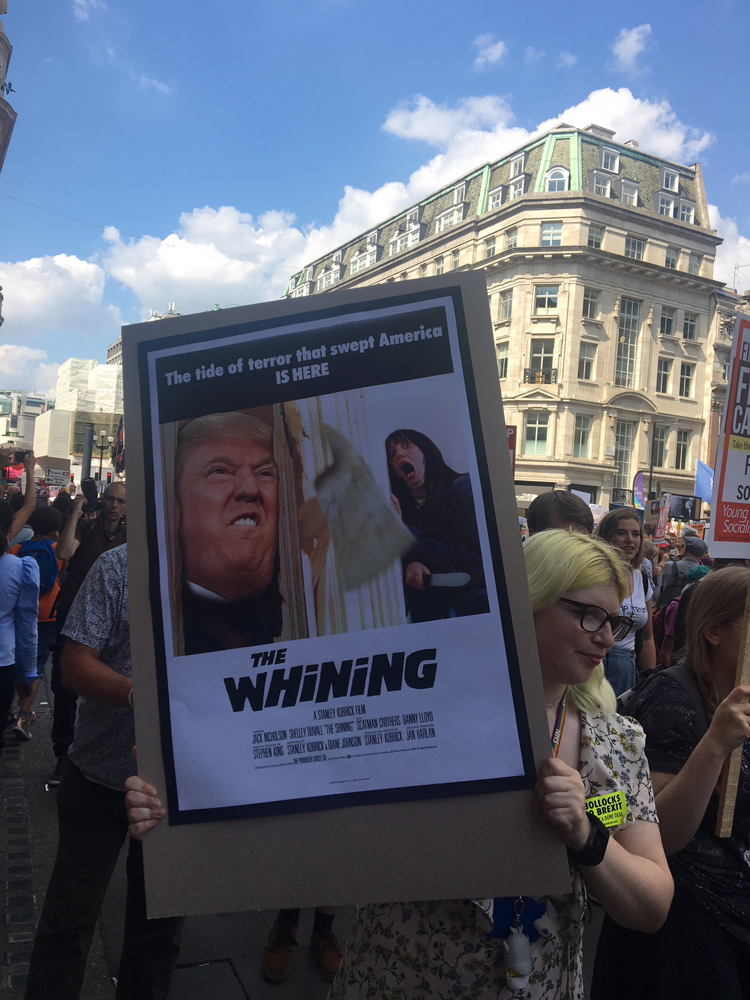 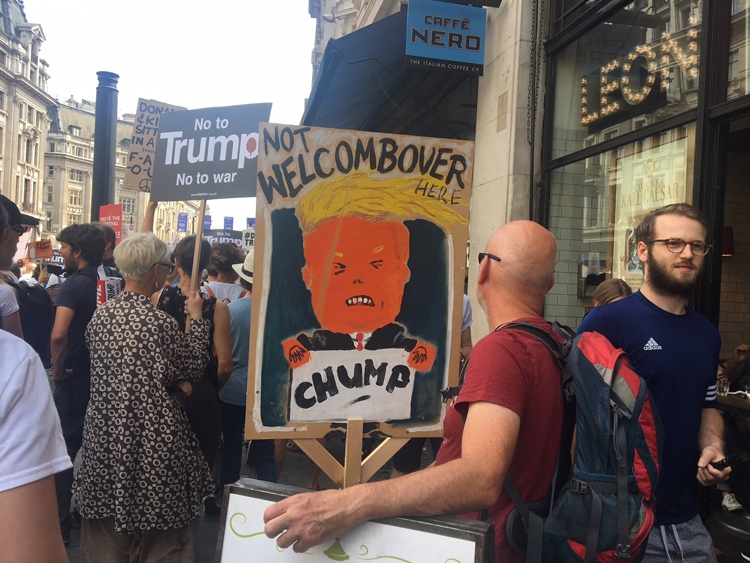 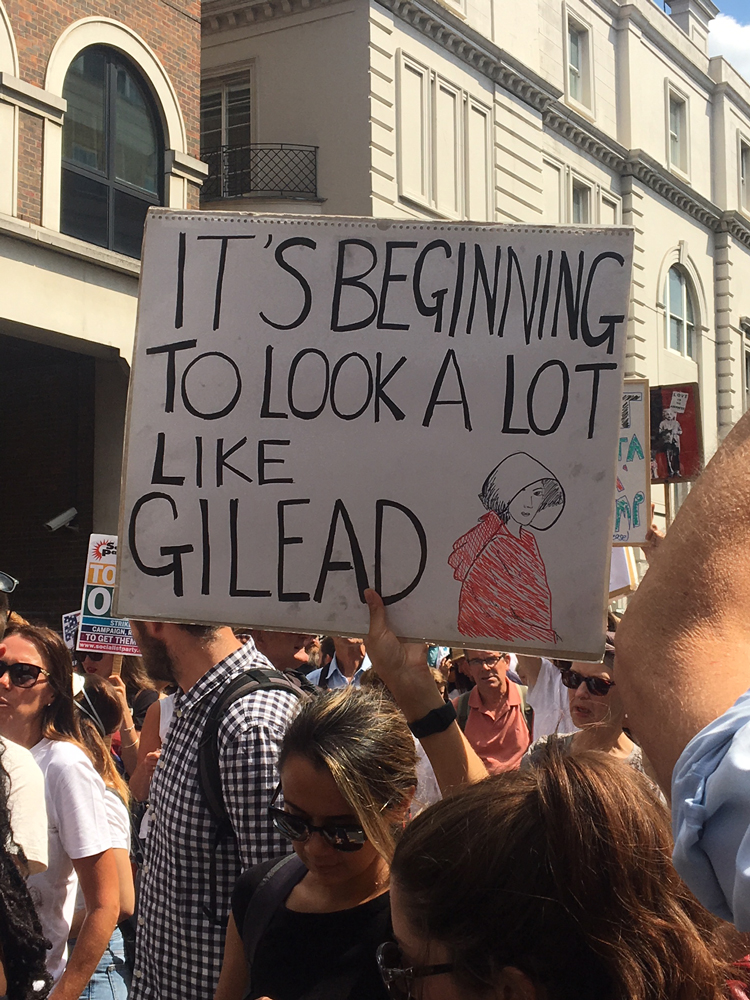 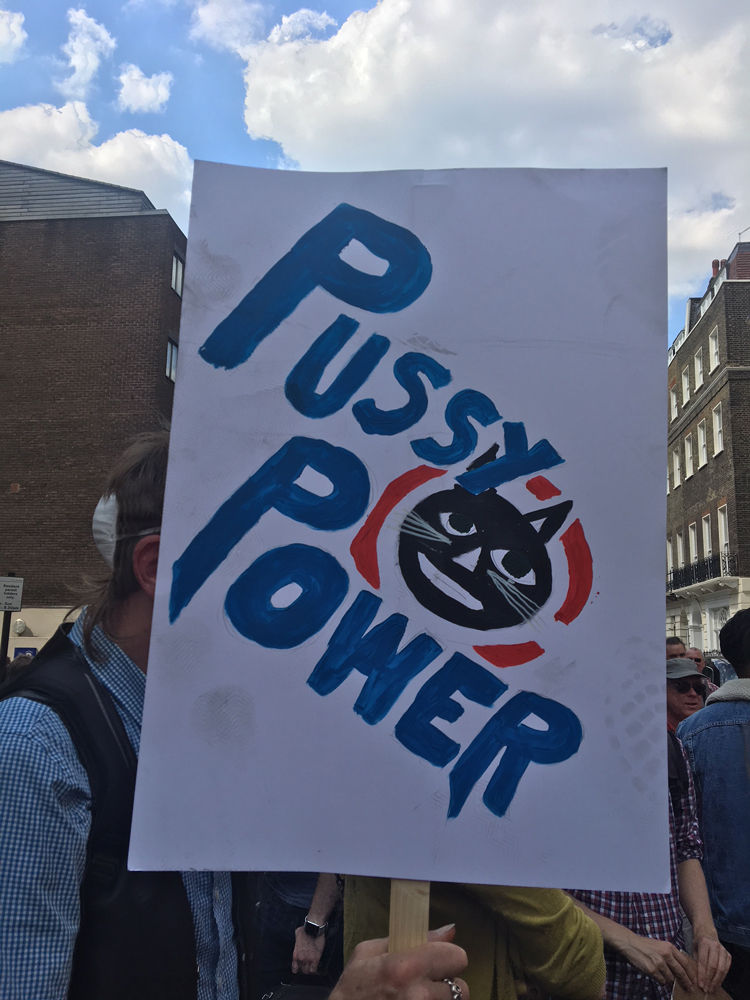 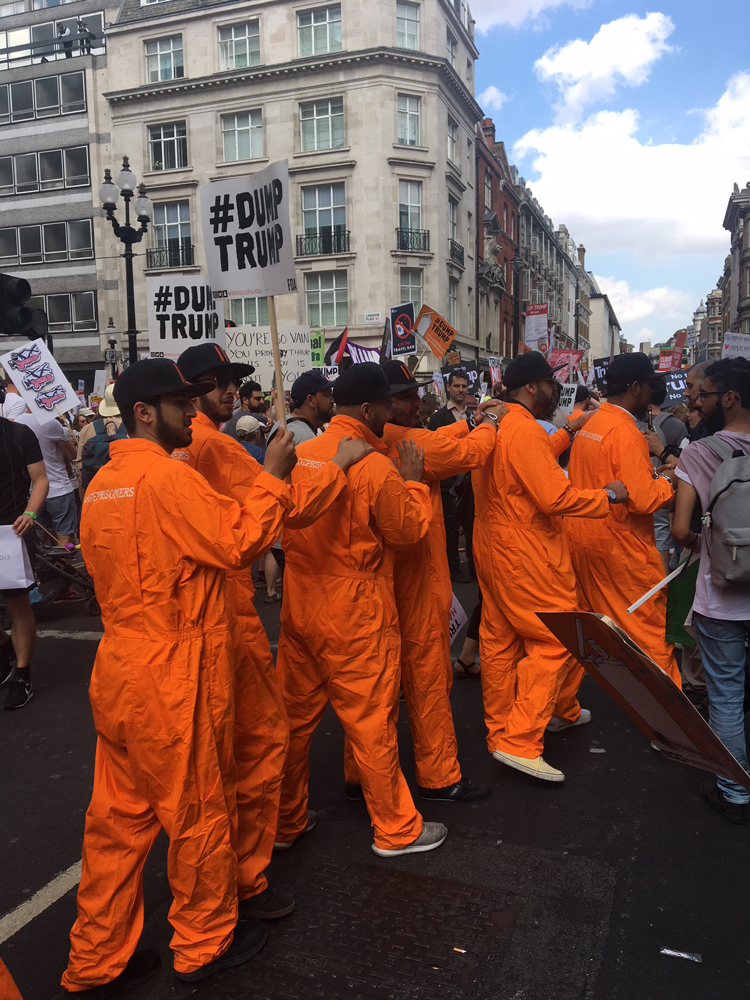 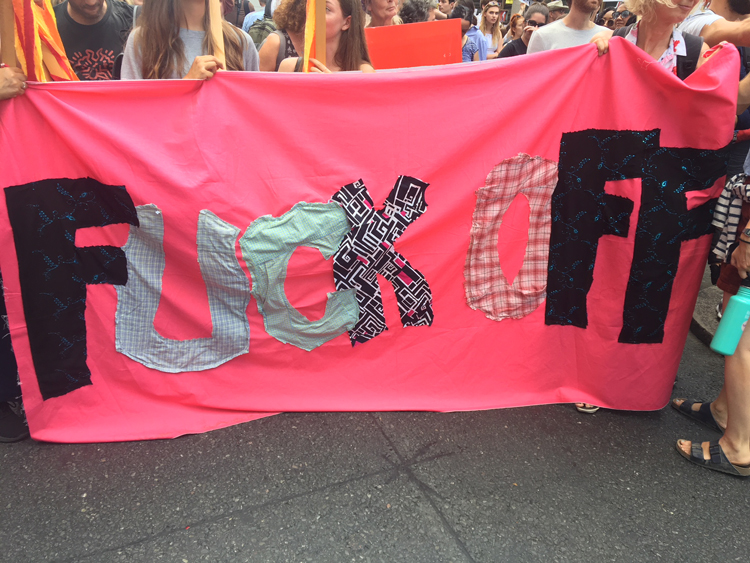 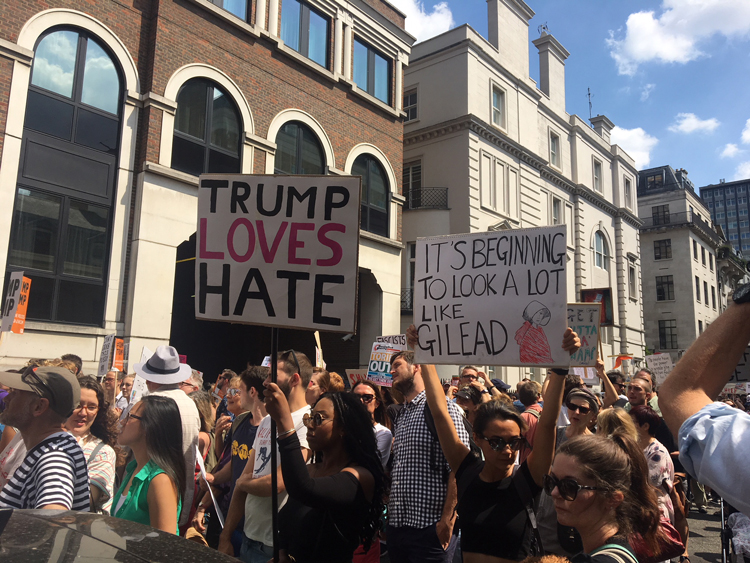 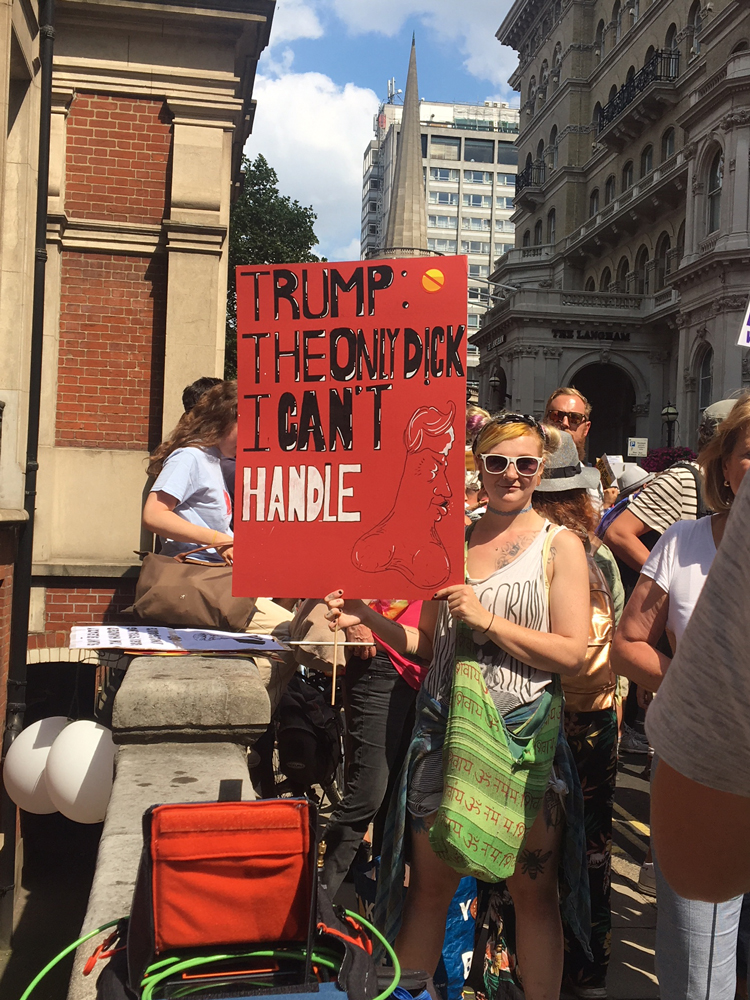 Did you make a protest banner or placard for an anti-Trump march? Let us know in the comments below, or email sarah.dawood@centaurmedia.com.