The National Library of Norway’s new permanent exhibition, Opplyst, has been designed by Nissen Richards Studio.

The London-based studio was responsible for the exhibition’s branding and graphics, while lighting design has been created by Studio ZNA, also located in London. 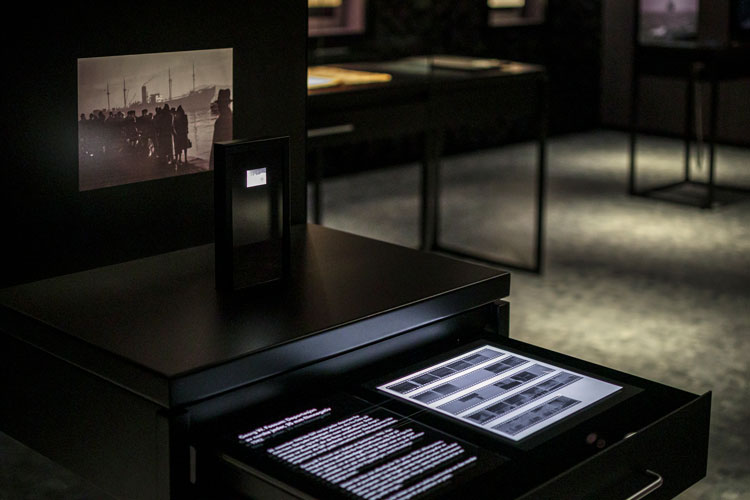 Opplyst translates to Enlightened and relates to the exhibition’s theme; 30 objects from the Norway’s history that shaped the Scandinavian nation.

Among some of this eclectic collection are a 12th century psalter (the oldest book made in Norway) and the Norwegian equivalent of the Magna Carta, the Magnus Lagabotes Landslov. There is also an early example of a chain letter – known as a ‘letter from heaven’ – as well as a letter from South Pole explorer Roald Amundsen. There are darker moments too, including a photo negative depicting the deportation of Norwegian Jews to Auschwitz in 1942.

The National Library of Norway was opened in 1989, and refurbished in 2005. As well as aiming to be one of the most “exciting” libraries in Europe, it hopes to “mediate” cultural heritage.

Pippa Nissen, the studio’s director, says that the aim for the display was for these objects to appear like they were floating, as a way to mirror the exhibition’s concept of light and darkness. The concept of “knowledge arising like light out of darkness” also became “structuring devices” for the exhibit.

Sustainability was also a focus, as the exhibition is permanent. Nissen says: “We set out to make something of lasting quality, with a materiality that spoke clearly of the ideas surrounding the project.” 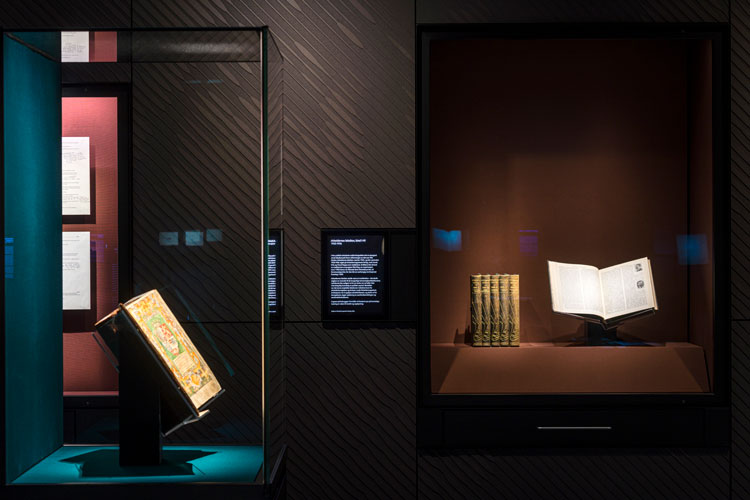 Another inspiration came from the library’s object collection, which is idiosyncratically collected. It is stored in a mountain and accessed via a mechanised system where a robot brings out objects on demand.

This unusual archive directed the studio’s design thinking, Nissen says. “The backwall of the new space is effectively an abstracted version of the drawers that hold the full set of historical objects,” she adds.

The wall has been constructed with timber blocks to form a “surface of varying three-dimensional depth”. “We liked the idea of creating a room that gradually shifts over time – a darkness that the objects sit within that is an ‘active darkness’, full of content and textures,” Nissen says.

The timber is also a nod to the forests that cover much of Norway. The material is also integrated into the floor, which has been sanded, oiled and stained with black and white pigments as a way to create charcoal-grey tones. The raised floor has another practical use: it hides all the cables that run up the legs of the showcases. 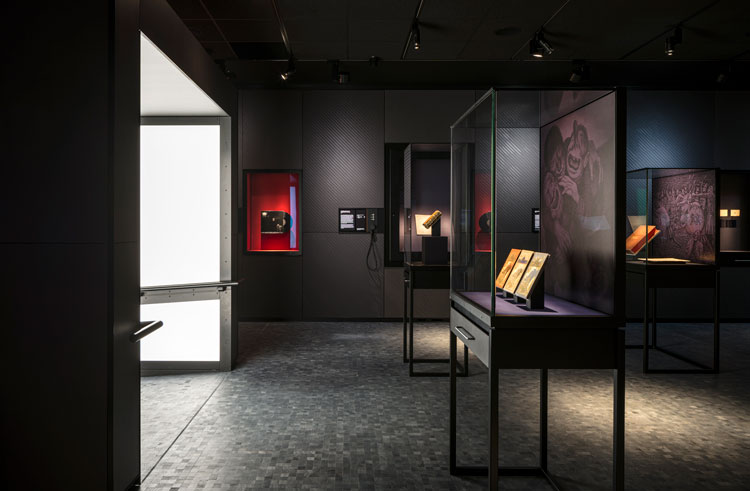 One of the requirements for the exhibition was equality; the library didn’t want to order the objects into a hierarchy. This sentiment is echoed in the three-dimensional backwall – “representations of infinite drawers” and in the actual drawers in the exhibition.

“You could open any drawer within the exhibition and find a surprise,” Nissen says. “Any moment from Norway’s history that has been catalogued by the library could be displayed here, each as interesting as the other.”

The drawers work as a kind of guide for visitors who want more information. They contain a lot of the interpretation for the objects, so visitors can choose whether or not to learn more about the objects. This means that visitors can find their own paths through the exhibition, “discovering connective threads” that are “entirely dependent on an individual’s mindset”.

If visitors do open the drawers, they will find additional objects, drawings and details from books. Nissen says that one example of linking subject matter is a latter from Charles Darwin (which is on display) and its accompanying draw that sheds more like on the work of Norwegian zoologist Georg Ossian Sars, whose drawings are displayed within the neighbouring showcase.

According to Nissen, the idea of equality “permeates Norwegian society” as well: “every thing and every person is as important as the next.”

While there is a focus on equality in the exhibition, a sense of “drama” has been created by contrasting some of these objects. Nissen says the exhibition’s “flexibility” creates some “extraordinary juxtapositions” such as the 12th century psalter and the layout of an album by Karpe Diem, a contemporary hip-hop duo. While the library chose the objects from its archive, the studio was involved in the final stages of selection as well as where objects were located within the space. 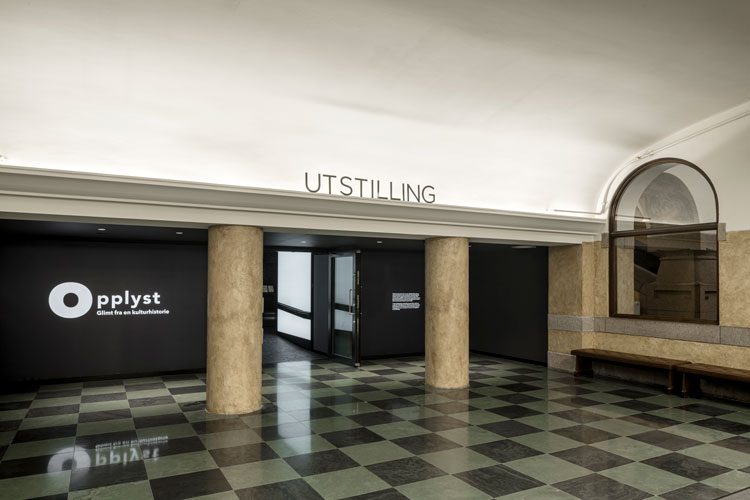 Studio ZNA has designed the lighting system so that there is a “slow light wash” through the space. According to Nissen Studio, the lighting moves from “cool to warm and adds a gentle dynamism to the display”.
Lightboxes are positioned either side of the exhibition entrance and there are is a “portal of light” that follows the ramp up to the raised floor.

The ‘O’ of Opplyst has also been illuminated to look like a halo.

Opplyst is open now at the National Library of Norway, Henrik Ibsens Gate 110, 0255 Oslo. More information can be found on the library’s website.