Globalance World is an attempt to increase transparency in the investment world. While the driver behind investing has historically been profit, the digital world map created by Clever Franke is designed to highlight how environmental and societal causes can benefit from the right support.

Globalance Bank is a private Swiss bank that operates globally. The organisation approached Clever Franke in winter 2018 to build Globalance World as a solution to the problems it saw within the banking sector. 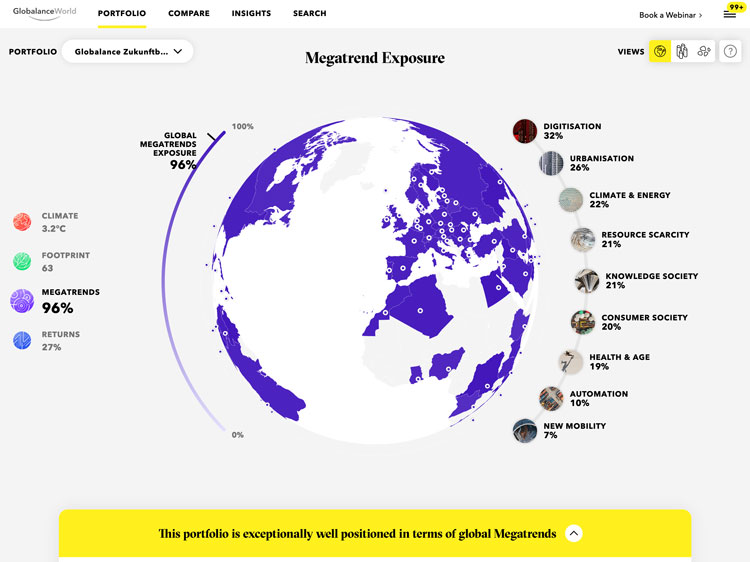 “A simple yet elegant idea”

The partnership between Clever Franke and Globalance Bank began with a three-month period in which the team defined the brief for the platform.

Although the idea from the bank to create an in-depth investment platform informed by data was there, a “concrete design brief and roadmap was missing”, Clever Franke co-founder and managing director Thomas Clever tells Design Week.

“Globalance had a simple yet elegant idea: to show how green a company really is and offset their financial performance against their impact on society the environment and other areas,” says Clever. “Their question to us was to turn this into an investment platform.”

As Clever adds, Globalance Bank had the data and means to distil insights, but the group needed a partner to turn the information into a product. With this in mind, the studio decided to focus on the “elegance and simplicity” of the bank’s idea.

“Very simple questions such as ‘what is the global warming potential of my portfolio’ or ‘on which country does my portfolio have a negative impact’ are at the heart of our platform,” says Clever. 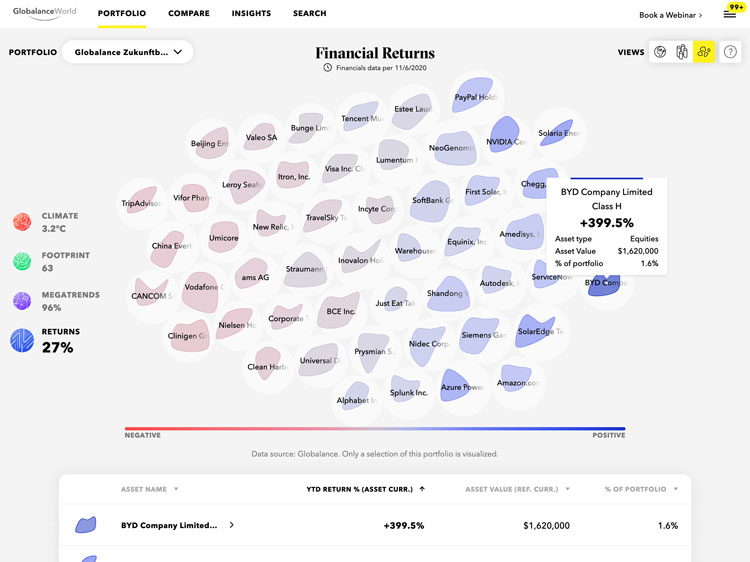 Designing an experience that was “intuitively accessible” was a top priority, Clever says.

“The financial industry is still relatively traditional when it comes to providing financial insights to their customers,” he says. “They are used to extensive spreadsheets and complex dashboards with all types of metrics and only an expert is able to read these.”

Rather than tackle the problem with the traditional means, then, Clever says the studio took the “opposite approach”, instead asking themselves: “How can we make all this information explorative for a layman?”

To make the experience accessible, it needed to be engaging. Clever Franke began the design process itself by developing a visual language for the platform which could act as a “signature”. Taking inspiration from Globalance Bank’s mission to encourage sustainable investments, the studio says it settled on an organic shape which has been named the “Pebble”.

This pebble is a data driven icon that changes according to the value of nine different criteria used to calculate the environmental, economic and societal impact of an investment and present it in a visual way. The criteria include health, labour, resources and water. Each investment will score differently on this nine-axis graph, so an unlimited number of pebble shapes can be made. 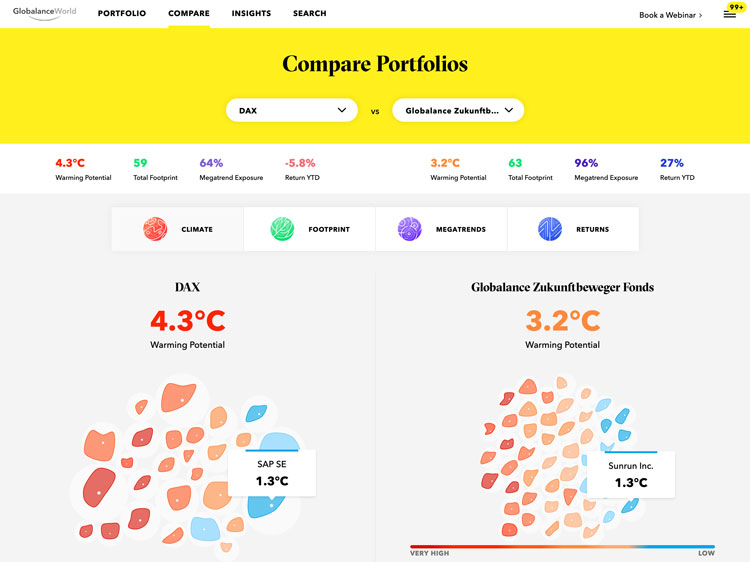 “A unique and recognisable focal point”

Since the point of the platform is to communicate how investments can impact the world on a global scale, the studio says the inclusion of an actual globe was an important part of the design.

Inspired by the “Blue Marble” picture taken of the Earth in 1972 by the Apollo crew, the interactive Globalance globe aims to create “a unique and recognisable focal point for the interface”, the studio says. Users can browse countries and learn about underlying data by spinning the globe.

“Representing portfolio data on the globe makes investments palpable and displays impact in a relatable way,” says the studio, adding that this was the biggest challenge of the project. “It is the first interface of its kind to combine a 3D interactive globe with 2D elements and a scrollable interface.

“After several iterations, we achieved high visual quality and a good level of performance, with several pieces of custom-developed logic.” 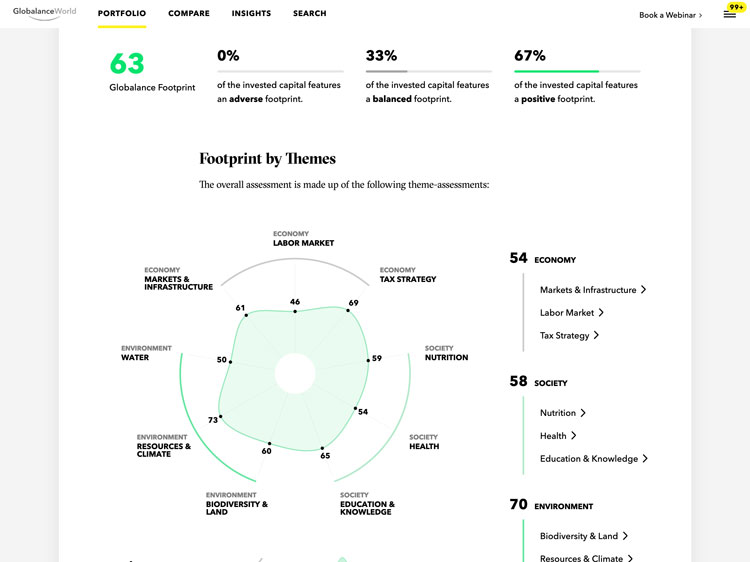 “Your money has a direct impact on people and planet”

The experience can be tailored based on a users’ local market too, with options to view the information relating the FTSE 100, Nasdaq 100 and more. Users can choose to view the data points using a “world view” or an “asset view”.

World view “gives wealth impact a tangible image”, the studio says, while the asset view allows the user to “dive into a portfolio asset by asset”. Both viewing options are supported by pages that give context to how a portfolio is doing and its impact on the world. Users can also access curated stories related to their area of investments.

“We wanted to investors to come back on a more regular basis and become more critical of their investments and whether these are contributing to a more sustainable future,” says Clever. “That’s why we approached this platform as an engaging content platform to design for more urgency and insights.”

“Why do we have full transparency on many things in life but when it comes to our investments and where and how wealth is invested, it’s an absolute fog? Our challenge ultimately was to make people conscious of the fact that your money has a direct impact on people and planet.”

St Bride Library at 125: is it time to go digital?