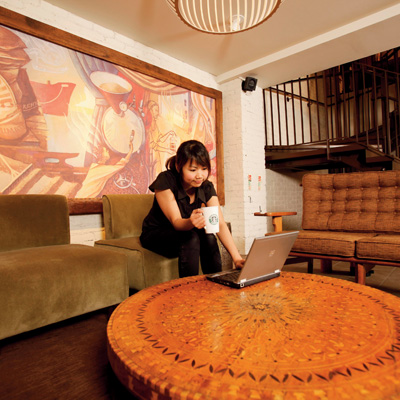 The store, designed by Pret’s in-house team, is the first branch to bring the kitchen front-of-house. It aims to be a ’warm, welcoming café’, marking a departure from Pret’s usual more clinical, steel-heavy ’grab and go’ feel.

Pret is among a number of chains that have worked to escape ’cookie cutter’ interiors and combat perceptions that British high streets are becoming homogenised.

Starbucks’ plans were exemplified in the opening of its London flagship on Conduit Street in November 2009, and Edinburgh’s Royal Mile Scotland flagship, which launched in July.

It says the Conduit Street store will inspire UK-wide new store designs and refurbishments, meaning that ’no two Starbucks will ever be entirely the same’.

Tim Pfeiffer, senior vice-president of global design at Starbucks, says, ’We’re the first retailer in our sector to adopt this approach to store design, which results in stores that look distinctively local and which fit within their neighbourhoods.’

In July, Costa launched a new-look ’metropolitan’ store format to cater specifically for urban customers, the first of which opened in London’s Great Portland Street.

The interiors were created by Stiff & Trevillion, and aim to create an individual look and feel using existing elements such as exposed brick walls.

Mike Stiff, director of Stiff & Trevillion, says, ’The challenge is that [Costa] survives by being a brand. People are much more sophisticated than they were five or ten years ago. There are more offers out there so it’s important that places look nice – [chains] have realised that design adds to the mix.’

Also in July, Coffee Republic appointed Conran & Partners to change its branding and interiors. The company wanted to overhaul its image to attract a wider audience, after being bought out of administration last year.

Nathan Zaver, senior designer at Conran & Partners, says, ’Coffee Republic’s look was left behind a little bit. All the black and red was a bit oppressive, so we wanted to bring something a bit fresher and more vibrant.’

Conran & Partners created a manual for the new identity to be rolled out across Coffee Republic’s branches, meaning differences between stores will be dictated by physicality rather than location or custom-made fittings.

Zaver sees the ’monochromatic’ browns often seen in chains, including Starbucks, as having been ’done to death’, and feels the future of interiors is in bold colours and vibrancy.

Pret uses a number of design consultancies for its interiors, including JHP, Cada and David Collins. For the most part, briefs for the interiors focus on functionality, increasing footfall and maximising ’dwell time’.

Paul Jones, director of retail design at JHP, feels that the trend for bespoke coffee shops is predominantly a metropolitan one, with regional outlets tailored to increasing customer footfall rather than creating a coffee ’experience’.

JHP created the retail concept for the ’test bed’ Pret in Kingston a year ago, which is to be ’tweaked and revamped’ for other stores outside of major cities.

Jones says, ’The design was efficient to get more people through, but customers weren’t responding to the look and feel during off-peak times. Pret wants to create a more relaxed experience than “grab and go”. We warmed it up, with less stainless steel, using softer finishes and more timber.’

Jones predicts coffee shops will steer towards Starbucks’ Conduit Street model – he describes it as ’the busiest meeting room in London’.

He adds, ’They’ll be more New York-style, more of a social event or a working space.’

In July, Cada founder David Anderson spoke at the Caffe Culture exhibition about the future of café design, where he agreed with Jones that environments will become more flexible in their function.

He adds that the bespoke, cosy model adopted by Starbucks is rapidly approaching its ’sell-by’ date.

’It’s ending,’ says Anderson. ’The interiors of tomorrow are coming out of the boutiquey, side street coffee shops. The scientific and the digital world will all change interiors.’

’New stuff’s coming from the back streets,’ he says. ’It’s going to be quite electric and dynamic with crisp colours and materials.’