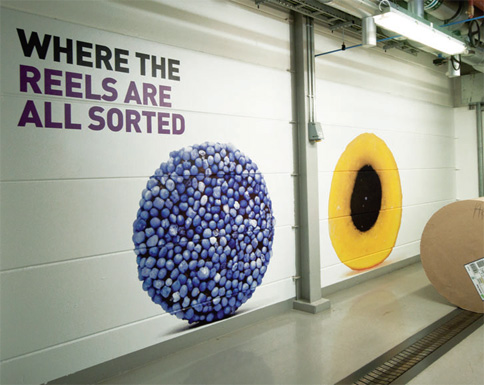 To The Point has created wall graphics for the Newsprinters plant in Broxbourne, Hertfordshire.

To The Point has been working on the project for about two years. The consultancy rebranded Newsprinters, which is owned by News International, three years ago following the company’s move from its Wapping site. It created a new identity, logo, external signage and way finding for the company’s three factories.

The consultancy was approached for the initial project when Newsprinters shortlisted it alongside about nine other consultancies. It pitched with a 12-page non-creative proposal, which focused heavily on engaging with staff. Simon Hutton, managing director at To The Point, says, ‘It’s a huge site – it’s very modern, but very grey, so as a working environment it’s not great. We created interior wayfinding by colour-coding areas to make it more appealing to the staff.’

Newsprinters commissioned the graphics to provide an ‘uplifting ambience’ for employees in their workplace, as well as bringing colour and visual stimulation to the plant to appeal to visitors.

Hutton describes the brief as a ‘blank canvas’. He says, ‘It became very much a two-way process – the client liked the ideas and was very up for doing some bits and pieces itself. One of the staff did one of the cartoons.’ The official unveiling to external visitors will be next month, and it is hoped the Broxbourne plant will act as a ‘test bed’ for the idea to be used in the company’s two other plants, in Knowsley and Motherwell.