Ahead of the Deutsche Börse Photography Prize announcement, all four of those shortlisted are set to show their work in an exhibition in London. John Stones takes a sneak preview

Looking at the shortlist for this year’s Deutsche Börse Photography Prize, you would be forgiven for blinking – not only because of the alternatively political and humorous nature of the work, but for names that include Phil Collins (work pictured left) and Robert Adams. In fact, Collins is no aging rocker, but an already much-lauded British photographer, whose work focuses on the comedy of interaction and follows the choreographing of his amateur subjects. Adams, meanwhile, is one of the grand masters of photography, and his elegiac documentation of the ecological damage inflicted upon the landscape of Oregon makes his body of work a fitting, but melancholy sequel to that of Ansel Adams. 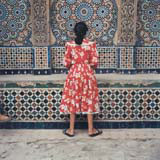 Also shortlisted are Morrocan Yto Barrada (work pictured right), who divides her time between Tangiers and Paris, producing photographs that acidly and ingeniously comment on the tensions between Europe and the Arab world; and Alec Soth, who has lyrically documented extensive travels down the Mississippi.

The work of the four photographers goes on show this week at The Photographers’ Gallery in London, ahead of the announcement of the winner of the £30 000 prize on 22 March. The description of the award as European is somewhat stretched by the inclusion of two Americans, but the selection criteria specifies a contribution to European photography, and both Yanks were shortlisted as a result of shows in Europe/ Soth for Sleeping by the Mississippi at the Open Eye Gallery in Liverpool and Adams for Turning Back at the Haus der Kunst in Munich.