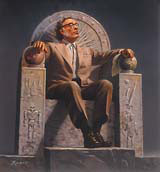 One of the main reasons I wanted to write about design, as a journalist, early in my career, was an obsession with reading science fiction as a teenager. All those lurid stories about future worlds, with gleaming monorails, disobedient robots, visiting aliens and vanishing rocket ships, kindled an interest in the possibilities of the man-made world that designers and architects address every day.

The more the stories were rooted in the commonplace – ordinary folk disturbed by a passing meteorite or human moral dilemmas applied to intelligent machines – the more I was hooked. By the time I reached university, I was starting to wean myself off ‘trashy’ science fiction and on to the classics, but not before I had worked my way through the great works of Isaac Asimov (1920-1992), author of I Robot and one of the finest minds of the genre.

Asimov (pictured) was simply a phenomenon, a genius of popular science and a very strange guy with it, as you might expect from a close friend of Star Trek founder Gene Roddenberry. Four years before he died, I met Asimov when he gave a keynote at the Industrial Designers’ Society of America conference in New York. He was every bit as weird as I had imagined, but seeing him talk closed the loop between my teenage passion for science fiction and my professional adult fascination with all forms of design.