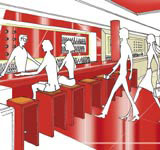 e consultancy has designed the main public spaces, including a 200-cover restaurant called City CafÃ©, the reception area, a 100-seat bar and Sky Lounge, which will offer exclusive dining for 30 people and views over London.

The £37m new-build hotel has been designed by architect Bennetts Associates and is City Inn’s fourth property.

According to Proof creative director David Morris, the chain is ‘plugging a hole in terms of both tariff and design experience between Travelodge and Forte mainstream packages on one hand and products like Malmaison and Radisson Edwardian on the other’.

City Inn has a ‘freethinking’ approach to design, says Morris, which is reflected in its preference for ‘good clean spaces’. It is spending in excess of £1m on interiors, but refused to disclose the design fee.

Morris adds, ‘Our brief was to evaluate the existing interiors brand and increase the level of sophistication. It was a good canvas, [but] we’ve taken it a bit further, increasing the quality of detailing and introducing a broader spread of design features.’

Morris and production director Will Hambling began the project while at Cobalt, now defunct. The pair founded Proof last summer.

City Inn Westminster is scheduled to open on 14 June this year and Morris says its design style will provide a ‘platform’ for future hotels. Plans are in the pipeline for a City Inn Manchester, adds the company’s head of development Adam Vickers.

Another feature of the Westminster project is a walkway called Art Street that will link the property with Tate Britain and feature works by the artist Susanna Heron.

Design’s in with a sporting chance

Design’s in with a sporting chance