Students and staff at the Design Against Crime Research Centre at Central St Martins College of Art and Design have developed a series of projects that aim to reduce incidences of crime at cash machines.

The designs have been worked up in collaboration with the Royal Bank of Scotland, the Dedicated Cheque and Plastic Crime Unit, technology company NCR and cash machine network Link. The work is going on show at the Design Against ATM Crime exhibition at Central St Martins which runs until 21 June.

A spokeswoman for DACRC says the centre has been working on cashpoint crime projects since 2010, when DACRC director Lorraine Gamman was approached by police in Hammersmith, west London, to tackle issues of street crime.

Gamman suggested using street art as opposed to yellow lines around the cashpoints. This led to DACRC working with RBS on a street-art project which is being trialled this summer in Camden and Westminster and elements of which are going on display at the college and NCR on the student project, which is set to go on display.

The 11 designs going on show include Saturu Kusakabe’s ATM Ball Mirrors, which give the cashpoint user a view of anyone standing behind them, and Judyta Wojciechowska’s ATM Magic Carpet (pictured) a decorative floor covering that guides users to private places to stand.

Graham Mott, head of planning and development schemes at Link, says, ’Art and cash machines are not an obvious marriage, and it is exciting to see these young people take a completely original and unexplored approach to ATM security.’ 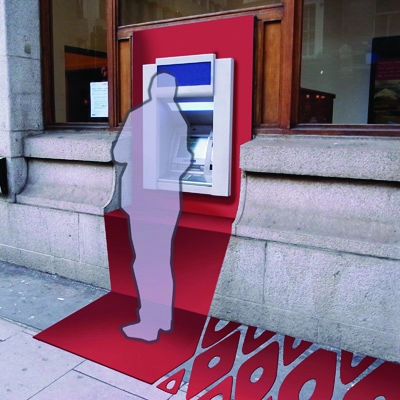 Spin turns on the light for Design Museum scheme