Salone del Mobile returns for its 59th year in April 2020. The annual festival, which takes place in Milan, showcases design from various sectors to an international audience.

This year, there’s a focus on the home – particularly kitchens and bathrooms – as a meeting point of craft, aesthetics and technology. At a conference previewing this year’s festival, the festival’s president, Claudio Luti (also Kartell’s CEO) said that the 2020 themes would look to the future, especially the arrival of “smart homes”. “What we inhabit influences the way we live,” he said.

Milan’s mayor, Giuseppe Sala also highlighted the city as the natural meeting point for these ideas; the 200,000 students mean that “Milan is a young city”. A fact mentioned more than once was that 600 of the designers at this year’s festival are below the age of 35. The youthfulness of the city, and its creative scene, energises the city, according to its organisers. “Milan needs Salone,” he said. “But Salone also needs Milan.”

It was what wasn’t included in the line-up that made one of the biggest impacts, however, due to the looming threat of Coronavirus. The deadly flu-like epidemic that originated from China’s Wuhan means that the country is on lock down, with most flights suspended in and out of mainline China.

At the press conference, videos of Chinese journalists, unable to travel to Italy, were broadcast. The journalists were all recording from home, appearing to be in self-quarantine. One of them, Beryl Hsu, editor in chief of IDEAT China, stressed how important design plays in everyday life, especially when “home becomes a shelter” as well as a “spiritual” retreat.

The absence of Chinese media was notable, and representatives of the festival frequently highlighted the strong relationship between Italy and China. President Luti stressed the closeness between Milan and Chinese communities. Not many details were made available, but he said that “digital connections” would be made if the Chinese couldn’t make the actual festival in April.

That relationship is important for business, of course. While percentages of audiences differ – 15% of furniture company B&B Italia’s business is from China – the Chinese market is clearly significant. The heritage of Italian brands is a big draw for Eastern customers who prize not only the brand identity but the quality of the furniture pieces. And in many cases, companies said that the Chinese market was a growing one. The epidemic means that they will likely experience some slow down in that area. Gabriele Del Torchio, the president of B&B Italia, said that sales in China “will be affected”.

The extent to which the outbreak of Coronavirus will impact the supply chain is not yet clear. Many of the Italian brands previewing their wares stressed how their goods were mostly, if not completely, made within Italy. But some industries might be vulnerable. B&B Italia owns lighting company Louis Poulson (as well as Scandinavian furniture company Flos) and Del Torchio said that their LED light bulbs are made in China. “The shortage of supply,” he said, “cannot be underestimated.”

Can sustainability be more than a “beautiful word”?

The festival laid out a ten-point manifesto with values ranging from youth, emotion and culture. Beauty had been added as an eleventh point. But the main word that cropped up among designers was sustainability. As mayor Sala asked, could sustainability be more than just a “beautiful word”?

Many of the designers are re-using previous years’ stands for this year’s festival, or else upcycling materials for the displays. Intriguingly Lago’s marketing manager, Alessandro Ceccon, spoke of a sharing economy for the company which provides materials and furniture items for homes, offices and hotels.

He said that the ownership model in Italy is “shifting” and that Lago is looking into a system that would allow customers to rent a product. While it’s a “work in progress” – profit margins would be harder to negotiate for dealers – he says it’s a move towards a more sustainable business model. Items would not be wasted as much, and could find life after one set of owners. A particular focus would be tables and beds, Ceccon added.

Home as offices, offices as home

The line between home and the workplace is increasingly “unclear”, according to IOC’s designer Rafaela Mangiarotti. IOC (which stands for International Office Concept) has been designing office furniture since 1992. Mangiarotti spoke of the changing place of work – which can now encompass the office, home or airport, for example. Her focus is on comfortable, functional designs – she says she does not view workers as employees but simple “people”. A recent partnership with Gensler’s North American brand suggests the power of Italian design abroad.

A new chaise longue, for example, which can be used for work and leisure blurs that boundary by allowing its user to sit upright and type emails but also back down to rest. It will be unveiled at this year’s festival. Its Monforte product – modular acoustic walls – means that offices can be rearranged easily for privacy or to create meeting spaces. Velasca is a futuristic-looking glass meeting pod that might look sci-fi but aims to break up office spaces into flexible areas where people can be alone or collaborate as they choose.

While there was frequent mention of office space, designers still looked to the outside for inspiration. Tuscany-based furniture company Edra is about to mark its 30th anniversary, and frequently looks to Florence (a city crucial to the Renaissance) as a source of inspiration. That might take the form of their On the Rocks sofa, which is made to look like an Italian shore line. The sofa is modular and made with their Jelly Foam technology so it’s also comfortable. The company also produces Smart Cushions – which look structured but are soft – which are a bestseller.

Its Pack sofa is a popular design in its own right, but also a comment on climate change – its white form looks like a polar bear and the company has placed the sofas on the Livorno shoreline where they look like melting ice caps.

Ritzwell, a Japanese furniture company, unveiled its new range of chairs and desks, inspired by Japan’s natural surroundings. Everything from the shapes of surfaces (which mimic Japanese shrines and temples) to the noises the doors make when they open (which sound like Japanese trees) is inspired by Japan – though the actual materials are imported from North America because of Japan’s scarcity.

Milan as a design capital 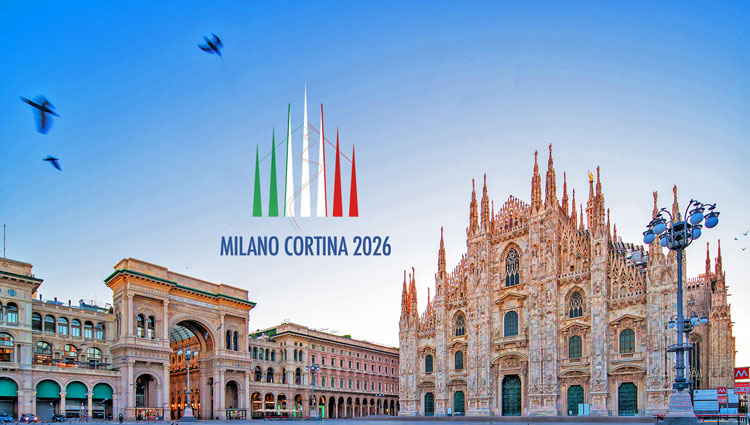 Despite ongoing concern about global news, the talk was frequently forward-thinking, especially about the city itself. Next year will be the festival’s 60th birthday. And Emanuele Orsini, president of industry organisation Federlegno Arredo, said that it would mark a renaissance of the city. In 2026, Milan and Cortina will co-host the Winter Olympics. In honour of that event, Milanese hotels will be revamped and hopefully draw renewed attention to the design market, hit badly after the country’s double recession.