Material of the year: Plastic, Beyond the Chipper

Plastic has been hitting headlines for some time now for negative reasons, so this year the London Design Fair focused on how designers could repurpose the material in new and positive ways.

Creations by four exhibitors feature in this display, all of whom worked with recycled plastic in imaginative ways.

Among them is Dirk Vander Kooij, who has used 3D-printing technology to turn polycarbonate objects such as CDs into rather attractive new products, such as vases that look like they are made from shiny plastic ribbons.

Another highlight is a table that resembles marble by Weez & Merl design studio, that is in fact made of the same material as many plastic carrier bags, low density polyethylene. 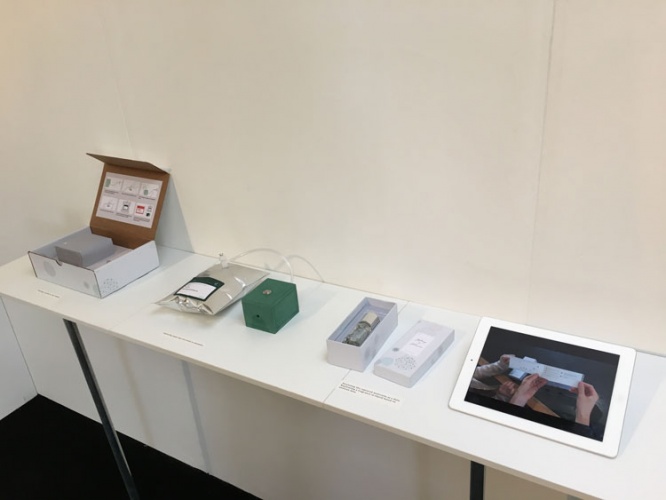 My Legacy offers a toolkit that lets people save a memory by capturing a scent of a moment, person or place they want to remember.

Ji Eun Jean Kim, a designer who created the product as her graduate project at the Royal College of Art (RCA), says: “I am from South Korea where we have a ceremony marking the anniversary of death. I had an interview with people who had lost their loved ones and what they missed was the scent of those they lost, so that is why I wanted to capture smells.”

Using a bag-like device with a pump similar to that used to test air pollution, users capture a bit of the air in their environment and send it off to the lab, where the molecules are analysed and turned into a scent or perfume. Examples at the stall are smells of brunch with friends, a bedroom and a birthday celebration in the park. 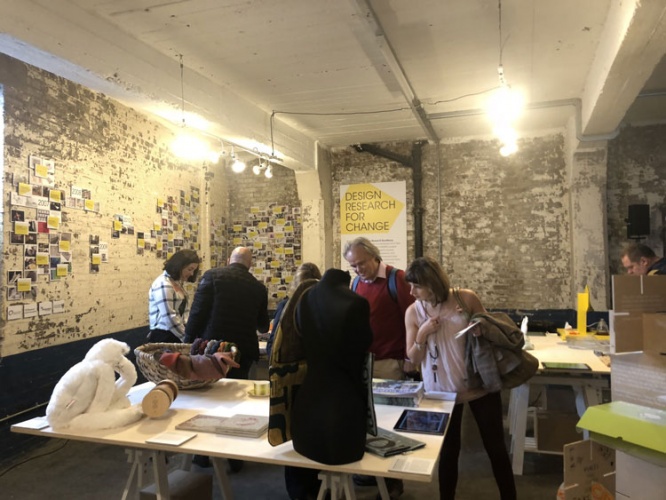 This display presents a range of 67 projects funded by the Arts and Humanities Research Council, each of which look at challenges in society and consider design research-led solutions.

Standout pieces includes playful objects designed for people with dementia to promote wellbeing. The work led by Cathy Treadway, a professor at Cardiff Metropolitan University, explores the theory that playing with children’s toys may help the wellbeing of people with dementia, but often draws negative views from friends and family. The work aims to create age-appropriate toys that have a similarly positive effect.

Another interesting piece at this stand explores the idea of work in prisons that encourages “design thinking” among inmates in a bid to boost employability upon release. This display of work led by Lorraine Gamman, a professor of design at the Design Against Crime Research Centre at Central Saint Martins, which focuses on an anti-theft bag project, which was carried out in conjunction with prisoners in London and Ahmedabad, India. 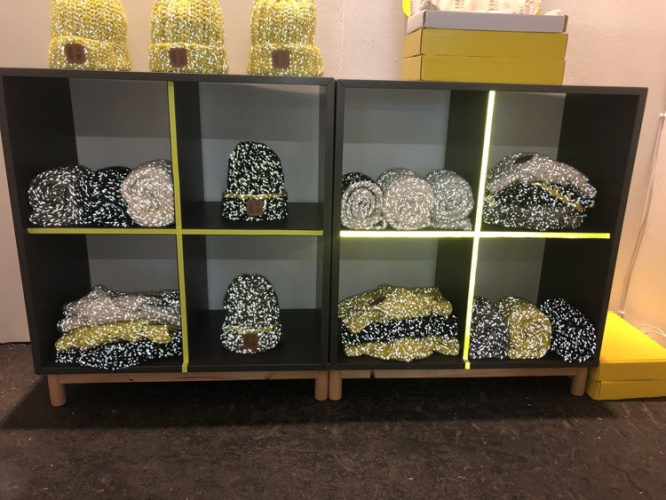 Glow aims to help pedestrians and cyclists be seen on the roads while looking good at the same time, with a range of “fashionable safety wear”.

The products have been handmade as part of a project with disadvantaged women in east London.

On offer is a selection of scarves and hats, mainly in black, white and fluorescent yellow, with light-reflective thread woven through them, which lights up when drivers’ headlights shine on it.

Comet Chukura, the fashion designer behind the project and founder at the social enterprise, says: “I wanted to involve my community, as sometimes fashion feels quite far away from real life.”

As a cyclist herself who was not keen on how most hi-vis (high visibility) gear looked, she says she wanted to make something that people would “want to wear”, while simultaneously making “an impact” on those in her community and “enabling” people. 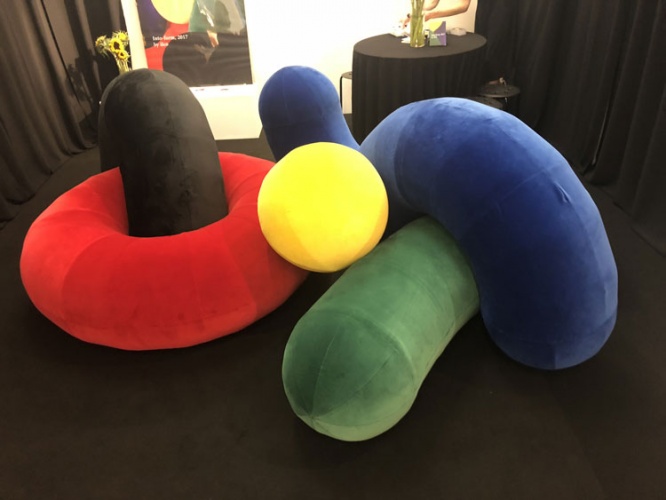 Ilco presents an eye-catching, colourful seating area made up of inviting, soft foam cylinders that can be put together in many different combinations. The interlinking shapes can be rearranged to fit different spaces, or simply put together for the fun of making something.

Ilco’s co-founder Madeleine Duflot says the design was inspired by 1970s furniture design in terms of the colours, modularity and “playfulness”.

“It is built around the concept of Gestalt, which is about having different elements, and when you assemble them together you see it as one whole,” she says. “It is about merging art and design together.”

The project, which was created by three Central Saint Martins (CSM) graduates, comes in bright, primary colours, or in a muted beige tone. 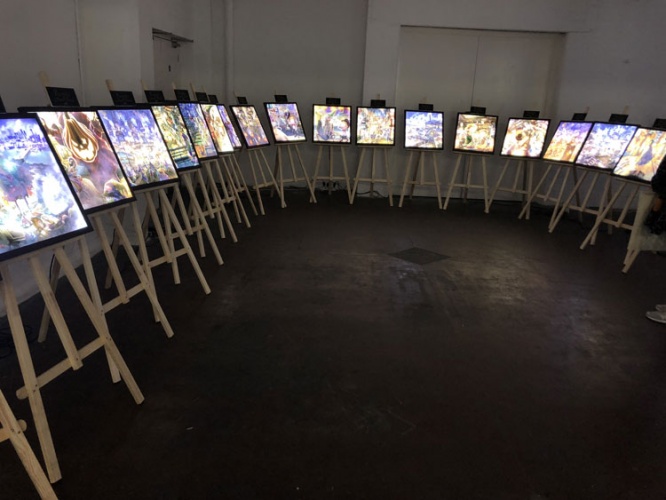 At the core of this stand is a picture book, which is surrounded by a striking display exhibiting a large, lit-up version of every page on glowing screens, propped up on easels.

Poupelle of Chimney Town tells the story of a young boy living in a make-believe, smoke-filled town that has never seen blue skies. Akihiro Nishino, the Japanese artist and author who spearheaded the project, enlisted 33 illustrators to draw the series of intricate, colourful images for the book, in a “division of labour” process.

The four-and-a-half year project was crowdfunded, with 9,550 people helping to raise 56.5million yen (£384,000) towards it. The book is already a bestseller in Japan.

It is hard to walk past this stand without a second glance at the large animatronic snake with googly eyes swaying its head at passers-by, The project, called The Snake Pit by Peter Heywood, is one of the highlights of this display of work by students from the Plymouth College of Art. The piece uses a series of cameras to follow people around the room, drawing on the concept of surveillance.

The range of works on this stand is varied, ranging from jewellery to glassware, and textiles to pottery. Interesting jewellery pieces worth a look include work by Rosie Groom, 3D design crafts student, who drew inspiration from ancient civilisations to create a series of rings made of brass and bronze, made to look like they “have been found” or excavated. “I quite like the idea that they are like ‘current relics’,” Groom says. 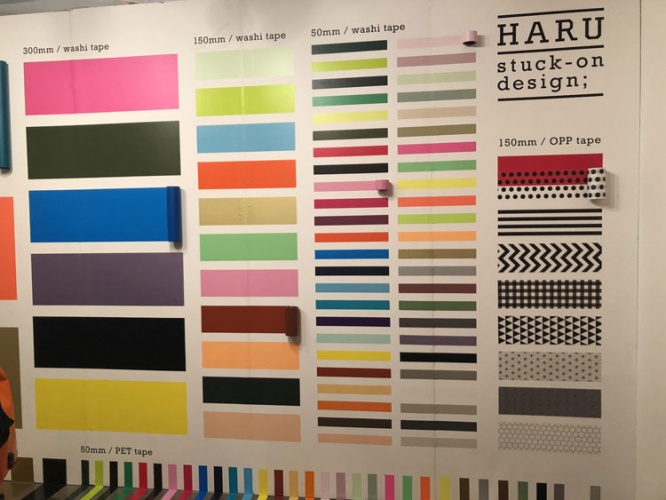 Those who live in rented accommodation will know the struggle of wanting to decorate walls without leaving a mark. Haru tape claims to have the answer, as the company’s colourful range of tapes can be stuck on and peeled off, and according to the company, it won’t damage walls. They say it is also fitting for those who fancy getting crafty and changing up the look of spaces regularly.

The tape, which comes in a range of colours and sizes, can be used to create designs on walls or other items, as the “Haru stuck-on design” stall demonstrates. Presented in a pop-up room, the white walls are covered in artworks made with the tape by Japan-based artistic duo, Spread.

Envisions in collaboration with Finsa: An installation featuring a range of wooden panels that have been turned into colourful patterned designs using paint and cut-outs. The exhibit aims to show the process of design as well as the final outcome.

One-minute lamp: An interactive installation which lets visitors create a lamp by arranging a variety of objects on a weight-sensitive glowing table. The piece by Netherlands-based Studio Catinca Tilea aims to inspire creativity and connect people as they see how others interpret the challenge, according to studio founder Catinca Tilea.

Pets and Pod: A stylish range of pet furniture, made from polyethylene terephthalate (PET) that mainly comes from recycled plastic bottles and aims to steer away from the “mass of generic products” in the pet market.

Magna Natura: A Portuguese company which has created an intriguing range of furniture made from cork and wood.

How Carlsberg has “grown up” and ditched its “laddish” persona