Carlsberg is not perceived to be the trendiest or classiest lager. Known for sponsoring the England football team plus multiple Champions League football clubs, and more recently seeking sponsorship for major festivals such as Reading and Leeds and Creamfields, the UK public’s associations with the lager tend to revolve around warm beer in plastic pint cups, and six-pack tinnies shared around a campsite.

But, according to Spencer Buck, creative director at Taxi Studio, Carlsberg does not hold this “laddish” association all over the world – the global, originally Danish, beer is held in higher regard across Europe, and its history suggests that it was far more revolutionary in the story of beer production than today’s plastic-pinted image gives it credit for.

Carlsberg was founded by J. C. Jacobsen, an art collector, in 1847. Its history is far more technical than people may think, and is 1975, Jacobsen set up the Carlsberg Laboratory, which looked to fix scientific issues related to brewing.

Its department of chemistry found and isolated the species of yeast which is now used to make pale lager – otherwise known as pilsner – marking a world first. This revelation was shared freely by Carlsberg to the rest of the world at the time. The laboratory also developed the concept of pH and made steps in protein chemistry.

But over time, this context had eroded. So how could Carlsberg drop its cheap and cheerful demeanour for a more intelligent and sophisticated one? Global, mass-produced beer brands are now constantly competing with craft beers, their illustration-heavy packaging and much cooler personalities.

Taxi Studio was commissioned to rebrand Carlsberg, refreshing its branding and packaging, following the studio redesigning sub-brand Carlsberg Export in 2016, giving it a far more Scandinavian-inspired look that harped back to its Danish roots.

The Carlsberg rebrand had to be “simple”, rather than “radical”, Buck says, to make the brand appear more premium without alienating its existing audience.

“There’s a tension in some markets,” he says. “Carlsberg does really well for itself and is seen as a premium pilsner in some, while others, the UK specifically, it’s not seen as a high-end brew.”

“We didn’t need a radical pack, we wanted to do something more permanent – something super simple and utterly restrained,” he adds. “In a way, that’s radical for beer branding. In craft beer, all the rules are broken – you could stick anything on a can of beer. It’s easy to do something visually revolutionary but that would have been utterly reckless.”

The new branding centres around a refreshed colour palette, alongside a redrawn version of the Carlsberg logotype, and the hops leaf and crown symbols that are associated with the brand.

The green and white palette has been retained, but a “lighter, fresher” green has now been incorporated, while the new logotype appears softer with more curved letterforms, and less script-like and ornate compared to previously.

“We tried to colour-match as best we could to an actual hops leaf,” says Buck. “This gives it a more refreshing, contemporary palette, compared to the darker, sombre tone the brand had before.”

The hops leaf again appears softer, more rounded and as a flatter graphic, and aims to feel more “organic” and closer to an actual leaf says Buck, while the crown sees a bigger transformation, dropping its gold and red detailing, turned into a simpler, flatter green shape.

Another key change has been to the founder’s signature, which appears across a lot of product packaging and communications. The J. C. Jacobsen signature now appears more natural and hand-drawn, says Buck, and moves away from the “chocolate box signature” style that it had before.

“We scanned a book with Jacobsen’s original signature in, traced over it by hand, then digitised it,” Buck says. “It feels more like it’s created using ink now. Basically, if Jacobsen had had a really good pen day, he would have signed that signature.” 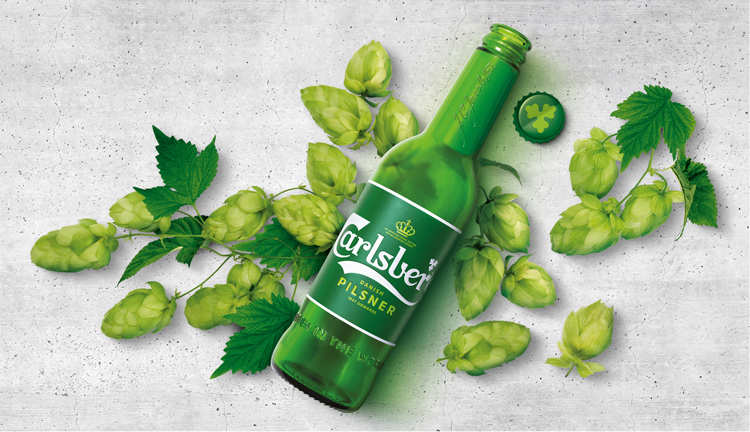 Bottle and can labels and product packaging have also been cleaned up in line with this new branding – a lot of excess detail and copy has been lost, and the new green shade dominates, with a significantly reduced colour palette of two shades of green and white.

Buck says the aim was to create a subtle brand evolution for Carslberg, rather than a dramatic change.

“We wanted someone to look at the new Carlsberg logo and not notice that it had changed fundamentally,” says Buck. “There’s a sense that it’s improved but most people probably wouldn’t be able to tell us why.

“The beer’s branding had put on a middle-aged spread over time – it had got chunky and lacked craft,” Buck says. “We wanted it to live up to the quality of the brew, and appear considered, aesthetic and functional.”

The new look comes alongside a bigger gear change for Carlsberg, which, alongside redesigning the aesthetic elements of its packaging, has also redesigned it physically so that it no longer uses plastic ring-tops for cans.

Instead, the beer’s new “snap pack” technology sees a glue used to stick six-packs of cans together, which can be pulled off, in a bid to reduce the amount of plastic waste the company produces by over 1,200,000 kilograms every year.

Buck says the rebrand had to reflect this strive for greater environmental responsibility. Therefore, the increased space created on packaging from paring back the brand design has now been used for descriptive text talking about Carlsberg’s new sustainability push.

On top of this, Taxi Studio was responsible for incorporating special inks into their graphic design, which are used on the bottle labels and aim to make recycling the bottles easier.

“Ironically, green is traditionally the least environmentally-friendly colour, and the ink is hard to recycle,” Buck says. “The ‘greener green’ colour we’ve created uses an ink that contains technology enabling it to be recycled more easily.” 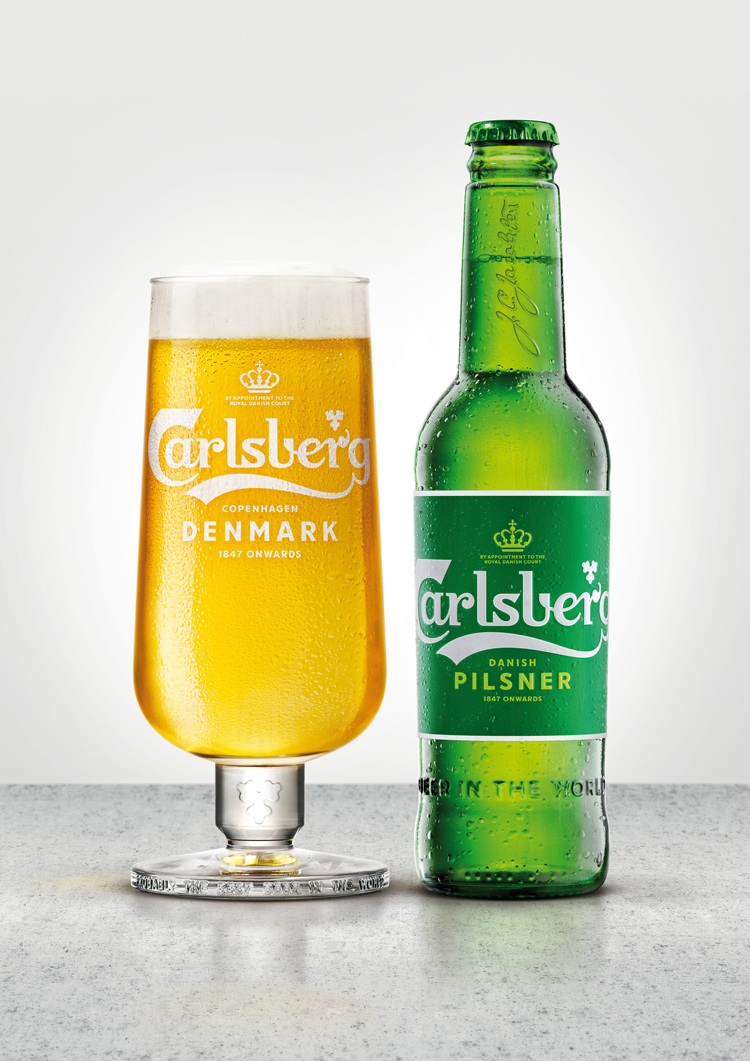 Another sustainable feature added by Carlsberg include a new coating on glass bottles which aim to extend their lifespan and encourage consumers to reuse them.

This need to give Carlsberg a more responsible and “grown-up” look was also tied in with the need to make it more accessible to a wider audience – and drop its football fan connotations.

“Carlsberg has become perceived as a very laddish lager,” says Buck. “It has had very heavy football associations and now it’s shifting. It’s growing up, it’s not playing any clever tricks and doesn’t have anything to hide – it’s just presenting itself in a simple, confident, gender-neutral and unapologetic way. It’s not a ‘man’s beer’ anymore – it’s a people’s beer.” 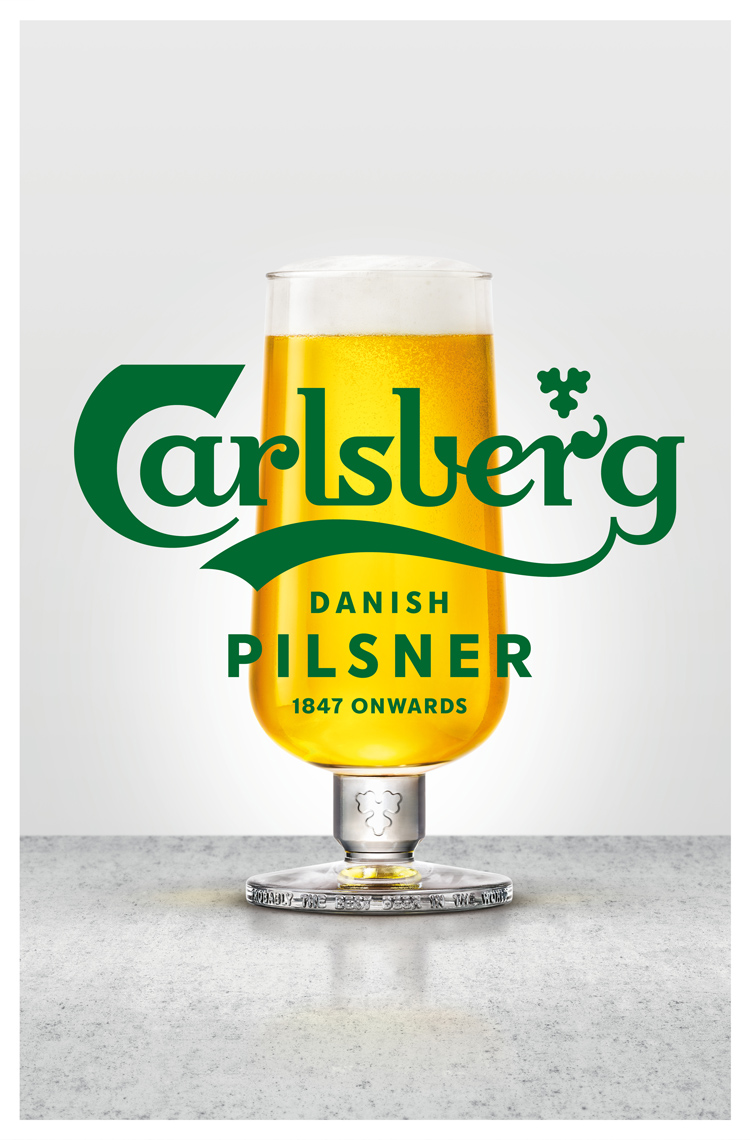 The new branding and packaging design is currently rolling out across all touchpoints, including point-of-sale products, online platforms such as the website, print and marketing materials, and merchandise and other assets, such as coasters and pint glasses.

The new look will be rolled out across all Carlsberg sub-brands and global markets, to create uniformity across the previously “very inconsistent” branding used across different products, says Buck.