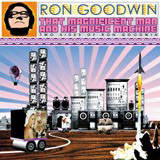 A city built out of sound equipment is the striking image used in EMI’s sleeve treatment for film score and muzak composer Ron Goodwin’s ‘best of’ compilation. ‘It’s our take on 1960s and 1970s household kitsch,’ says EMI designer Andrew Day. The Further Adventures of Ron Goodwin features music from the 1965 20th Century Fox film Those Magnificent Men in Their Flying Machines and Where Eagles Dare. According to EMI senior designer Gareth White, the work aims to play on the flamboyance of Goodwin’s tracks. EMI is promoting him as an unsung UK talent.